First Look at the Pacifica, California Fresh & Easy Neighborhood Market Store, One of the First Opening in Northern California in Early 2011 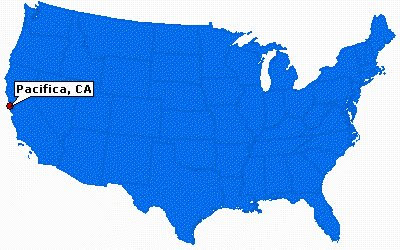 Progress is being made by Tesco in preparing its future Fresh & Easy Neighborhood Market store in the Pedro Point Shopping Center, at 5550 Coast Highway, in Pacifica, California, for an early 2011 opening.

The store, which is located in the coastal San Francisco Bay Area city's Pedro Point neighborhood, is one of the first 12 Northern California region Fresh & Easy markets Tesco plans to open in the first quarter of next year. [See - December 14, 2010: Fresh & Easy Neighborhood Market to Open 5800 Third Street 'Flagship' Store in San Francisco Later in 2011 Than Originally Announced. Also see the links to previous stories at the linked December 14, 2010 piece above.] 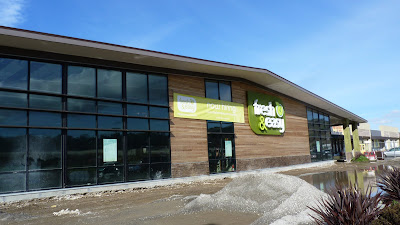 According to our most recent information, Tesco is targeting a March 2011 opening for the Pacifica store. However, that could change. It's possible the market could open as early as February, or as late as April 2011.

The store is new construction. The building has been completed since October 2008, as we've previously reported in Fresh & Easy Buzz. 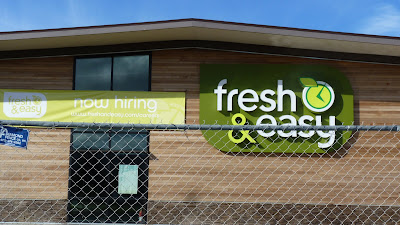 The wood siding and exterior signage, which you can see in the photographs above and below taken today, both were installed in recent weeks. Also note the "Now Hiring" banner sign on the store's exterior. As far as we are aware, these are the first photographs to be published of the store since work has started to prepare for the early 2011 opening. 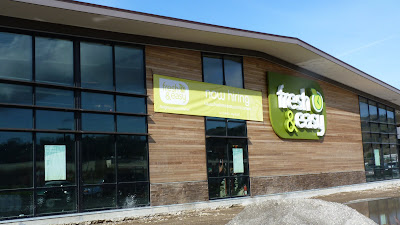 Workers are preparing to begin work on the store's interior. There are various fixtures and other equipment inside the future Fresh & Easy fresh food and grocery market, awaiting installation.

A number of residents of the Pedro Point neighborhood, where the city's mayor, Jim Vreeland, lives, tell us they're pleased to see Tesco plans to open the store that's been sitting vacant since fall 2008. In fact, the Pedro Point Neighborhood Association plans to invite a member of Fresh & Easy's management team to speak before the group of neighborhood residents early next year, leaders tell us.

Over the last couple years, some Pacifica residents even took to referring to the long-vacant Fresh & Easy store building as "Vreeland's Folly," since the mayor was instrumental in luring the grocer to the store in early 2008. We're told the mayor, who over the last couple years has often been asked by his neighbors when the grocery store will open, is pleased the store will soon open as well. 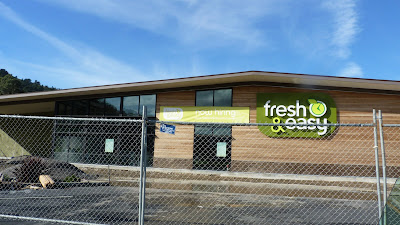 Fresh & Easy Buzz has reported on and writen extensively about the future Pacifica Fresh & Easy Neighborhood Market store. Below is a selection of those stories:

July 18, 2010: When it Comes to Northern California - its Competitors are Rome Burning and Tesco's Fresh & Easy Neighborhood Market is Nero Playing the Fiddle

October 9, 2008: Pacifica, CA Mayor Jim Vreeland Says He's Excited to Have Fresh & Easy Store Coming to Pedro Point; Says New Center Will Be One of the Best in Town

[Editor's Note: The photographs above are copyright of Fresh & Easy Buzz. Publications are free to use the photos as long as they provide a photo credit to Fresh & Easy Buzz, along with a link to the blog.]

[Editor's Note: We began our 'Northern California Market Region Special Report' series in April of this year. It's one of a number of special report series' we've done in Fresh & Easy Buzz over the last three years. Taken as a whole, we think the series offers one of the best up-to-date looks at the Northern California market region, which Tesco's Fresh & Easy Neighborhood Market plans to enter in early 2011, that's currently available. Below are the stories in the series thus far. Click on the title to read the story.]

[Also: click here , here and here for a selection of past stories on Fresh & Easy and Northern Calfornia.]
Posted by Fresh & Easy Buzz at 4:03 PM