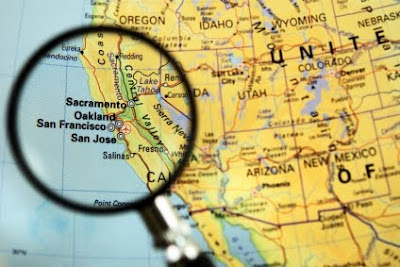 Don't bother asking Fresh & Easy Neighborhood Market if it 'Knows the Way to San Jose.' It does. But so do many of its competitors and future competitors.

Tesco's small-format Fresh & Easy fresh food and grocery chain is planning a third store in San Jose, which is the largest city in the San Francisco Bay Area, with a population pushing one million.

Fresh & Easy Neighborhood Market has applied to the California Alcohol Beverage Control department for a general off sale beer and wine sales license (#469249) for the future store. The grocer's application is in the "pending" stage at present. However, unless there's some serious objection by neighborhood residents or the City of San Jose to the offering of beer and wine for sale at the location, gaining approval of the permit shouldn't be a difficulty for Fresh & Easy.

There are currently four major food and grocery stores in the Saratoga and Payne area: A Safeway supermarket, a Trader Joe's, a branch of the Berkeley, California-based salvage and discount grocery chain Grocery Outlet, and a Ranch 99 supermarket. Ranch 99 specializes in Asian foods but also offers a strong selection of basic groceries and fresh foods in its stores.

As we've written previously in Fresh & Easy Buzz, Tesco's Fresh & Easy has a mixed suburban, urban and rural store location strategy in Northern California. For example, the planned new store in San Jose is in an urban setting. Conversely, the Los Banos and Sutter Creek sites are both in smaller, rural towns.

Fresh & Easy Neighborhood Market isn't the only grocer with its sites set on San Jose. Below is a summary of a number of other food and grocery retailers who've also 'Found the Way to San Jose':

Walmart Stores, Inc.: Walmart has plans for multiple stores in San Jose for its 20,000 'Neighborhood Market by Walmart' stores, which it plans to open throughout the Bay Area, elsewhere in Northern and Southern California and in other U.S. cities, as we reported in this July 6, 2010 story - July 6, 2010: Walmart Looking for Store Sites in Northern California For 20,000 Sq-Ft Neighborhood Market by Walmart Prototype Store.

Whole Foods Market: is planning to open its first store in San Jose - in the Blossom Hill neighborhood - in 2011, as we reported in this story earlier this year - A Whopping 15 of Whole Foods Market's 41 New Stores in Development are in California - And Nine of The 15 Are In Northern CA. Whole Foods is currently searching for additional store locations in San Jose.

Sprouts opened its first Northern California store, in the South Bay Area city of Sunnyvale (at 111 E El Camino Real), which is near San Jose, on June 2 of this year. [See - June 5, 2010:Sprouts Farmers Market Opens First Northern California Store in Sunnyvale; Strikes Up Partnership With Local Non-Profit Farm] The grocer plans to open a second Bay Area store, a 34,000 square-foot unit in downtown Dublin California in the East Bay Area, in early spring 2011. Sprouts Farmers Market also plans to open a third store in Roseville, near Sacramento, at about the same time next year. More stores are on the way.

In fact, Henry's plans to open its second store in Northern California, and its first in the Bay Area, in the East Bay city of Walnut Creek next summer. A developer, Hall Equities Group, currently has plans before the City of Walnut Creek for the development of a 2.8 acre parcel in the city, of which a 25,000 square-foot Henry's Farmers Market store would serve as the retail anchor. The Henry's market is planned to go into a vacant building on the parcel which was the former home of co-op grocery store. The developer's plans call for an additional 10,000 square-feet of retail shops to be situated around the anchor Henry's grocery store. The developer's proposal is currently working it's way through the city planning process and should gain approval soon, were told.

Target: Over the last 12 -to- 15 months discount retailer Target has added its 10,000-12,000 square-foot P-Fresh grocery and fresh foods markets-within-a-store, which include produce, meat, perishables, frozen and deli/prepared foods offerings, along with packaged food and grocery items, to seven of its stores in San Jose. This development amounts to about 100,000 new square-feet, but spread out throughout the city, of new food and grocery retailing space in San Jose in a period of about one year.

Safeway Stores, Inc.: Safeway is the food and grocery retail market share leader in San Jose, which is something it's not about to give up without a hearty food fight. It's also the market share leader in the entire nine-county San Francisco Bay Area. Safeway's headquarters is in the East Bay Area city of Pleasanton.

The San Jose store is about 24,000 square-feet. The Long Beach 'The Market' unit is 15,000 square-feet. In early 2008, Safeway hired the Cornish & Carey commercial real estate firm to find it a total of five locations for the small format store, all in San Jose and the surrounding South Bay Area. To date, the downtown San Jose store is the only one of the five locations opened by Safeway. The main reason for this is because Safeway CEO Steve Burd has been less than impressed with the performance of the two 'The Market' stores to date.

However, the five 'The Market' locations in the South Bay region were in part inspired as a counter move to Tesco's Fresh & Easy, which at the time planned to start opening its Northern California stores in late 2008/early 2009. As we've written about extensively, Tesco postponed the launch, and now plans to open the first batch of 12 Fresh & Easy stores, including two in San Jose and one in nearby Sunnyvale in early 2011. As such, it will be interesting to see if Safeway goes forward with any of the four locations in the region now that Fresh & Easy plans to open the stores in five to six months.

Safeway's focus in the Bay Area currently is on big stores in the 45,000 -to- 55,000 square-foot range - expanding current smaller stores in major remodels and when building new ones going big. Additionally, with nearly three years observing Fresh & Easy in Southern California, Nevada and Arizona, combined with the fact Tesco continues to loose a couple hundred million dollars a year with the chain, Safeway's sense of urgency about having numerous small-format-killer stores of its own in its home Bay Area region is minimal, compared to what it was in late 2007/early 2008, when the first Fresh & Easy stores were just opening.

Other grocers are also expanding in San Jose, including the Grocery Outlet chain mentioned above, local multi-store independent Zanottos Family Markets and a couple others.

In 1968, singer Dionee Warwick had a huge hit with the song 'Do You Know the Way to San Jose,' written for her by Burt Bacharach and Hal David. When it comes to finding the way to San Jose in 2010, it's clear Tesco's Fresh & Easy, and a whole bunch of other groceries have done so without a doubt.

[Also: click here , here and here for a selection of past stories on Fresh & Easy and Northern Calfornia.]
Posted by Fresh & Easy Buzz at 7:40 AM