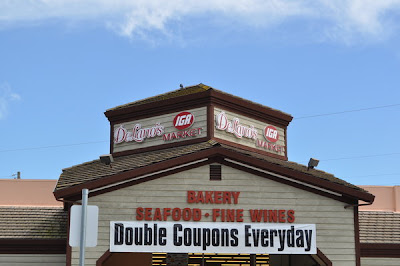 The DeLano's IGA Market unit at 207 Flamingo Road in Mill Valley, California (pictured above) is one of the independent grocer's five (out of seven total) stores closing by December 17, 2010 [Photo Credit: Jay Masunaga.]

Early yesterday we reported on the problems California food and grocery industry retailing veteran Harley DeLano is having with his DeLano's IGA Markets chain, which he co-owns with his son Dennis. The DeLano's operate seven stores in Northern California using the IGA banner - three units in San Francisco, three in nearby Marin County and one market in Davis, California, which opened in September 2009 and is the independent grocer's newest store. Davis, which is near Sacramento and home to the University of California at Davis, is a 73-mile drive from San Francisco.

You can read the story below on the blog or at the link here - November 29, 2010: Veteran Grocer Harley DeLano's 'DeLano IGA Markets' Chain On the Verge of Closure in San Francisco Bay Area.

We've now learned additional information about the impending store closures thanks to information made public by Joseph Neri, the attorney for Delano Retail Partners LLC, which is the corporate entity for the DeLano's and their privately-held grocery chain, and other sources.

According to Neri, Delano Retail Partners LLC is closing five of its six stores in the San Francisco Bay Area. He says the stores will be closed by December 17.

The one Bay Area store that will remain open (at least for now) is in Fairfax, in Marin County. The store in Davis, California will also remain open, according to our sources.

We noted in yesterday's story - November 29, 2010: Veteran Grocer Harley DeLano's 'DeLano IGA Markets' Chain On the Verge of Closure in San Francisco Bay Area - that the Fairfax and Davis stores, which the DeLano's operate in a somewhat seperate way as Hometown IGA Markets, including using a different website for the two stores than the one used for their six DeLano's IGA Markets, would likely remain open even if the other six stores are closed. That will be the case for now at least, based on our reporting.

Here are the details, according to attorney Neri, along with further information we've obtained from other sources:

DeLano Retail Partners LLC subleases the five stores to be closed in San Francisco and Marin County from Ralphs Grocery Co. of Ohio, which is an entity set up by Kroger Co., which owns Southern California-based Ralphs Supermarkets.

Ralphs Grocery Co. has evicted the grocer from the five stores. Last week Ralphs filed lawsuits in San Francisco and Marin County Superior Courts against DeLano Retail Partners LLC for failure to pay rent on the five units, according to Neri. The amount Ralphs is asking the courts to order DeLano Retail Partners LLC to pay in back rent is well over $1 million, according to court records.

DeLano Retail Partners doesn't have the cash to pay the back rent, or for that matter to keep current going forward. Therefore Harley DeLano and his son Dennis decided to close the five stores.

According to Neri, DeLano Retail Partners LLC plans to turn over the five stores to Ralphs Grocery Co. of Ohio by December 17, a little over two weeks from today. As we reported yesterday, product in the stores is being sold out. The grocer is discounting remaining products in all of the five stores to be closed.

Ralphs Grocery Co. isn't the landlord for the DeLano's Hometown IGA Markets entity, which includes Fairfax IGA, in Marin County's Fairfax, and Westlake IGA Market, in Davis. No eviction notices have been filed for the two stores as of today.

Below are the addresses of the five stores being shuttered:

In yesterday's story we mentioned that Marin County-based multi-store independent grocer Mollie Stone's Market's is interested in one or more of the five closing DeLano IGA Markets stores.

First, because the DeLano's are closing the five stores by December 17 due to eviction and related financial difficulties, Mollie Stone's won't be acquiring any of the markets directly from the grocer. However, according to our information, Mollie Stones is interested in at least two or three of the sites, which once vacant will be back on the market, since Ralphs' has no plans to locate stores at the locations.

Kroger Co.-owned Ralphs Grocery Co., which is based in Southern California, has sold or closed all of its Ralphs banner supermarkets and Cala Foods/Bell Markets banner stores in Northern California, accept for one remaining Cala Foods unit in San Francisco's Nob Hill neighborhood, which is slated to close either at the end of this year or sometime in 2011. Instead it operates the Foods Co discount warehouse chain in Northern California and the Bay Area region, which is the format Kroger/Ralphs is focusing on in the market. [See - July 22, 2010: 'The Insider' - After Four Years in the High Weeds in Northern & Central California, Kroger Co. is Emerging to Grow its Foods Co Chain.]

One of the stores that Tesco's Fresh & Easy Neighborhood Market plans to open early next year in Northern California is not far from the Outer Richmond District Delano's IGA Market unit, at 6333 Geary Boulevard, that will soon be closed. The Fresh & Easy store, which is at 32nd Avenue & Clement Street in the Outer Richmond, should benefit from the closing of the DeLano's market because there isn't another grocery store in the immediate portion of the neighborhood.

Tesco's Fresh & Easy would be wise to take a serious look at all five of the closing DeLano's IGA Markets stores, particularly the two units in Marin County (Mill Valley and Tiburon), where Fresh & Easy Neighborhood Market doesn't currently have any planned locations.

The 18th Street store in San Francisco's Castro District, which is a space of no more than 10,000 square-feet, is also a location Tesco's Fresh & Easy should look very closely at trying to acquire. We suspect a number of grocers will be looking at the location.

The Castro District ranks high for sales of natural, organic, fresh-prepared and specialty foods, for example. Both Whole Foods Market and Trader Joe's have plans to open stores in the Castro in 2011. Whole Foods' approval looks solid. Trader Joe's is having some problems in terms of getting its store site in the neighborhood approved.

The other two closing DeLano's stores, the Geary Boulevard unit in San Francisco's Outer Richmond District mentioned previously and the Mission District store on South Van Ness, offer less potential for Fresh & Easy in our analysis, although we would take a close look at both, just not as close as the others.

The Geary Boulevard DeLano's IGA Market location in San Francisco's Outer Richmond District is likely too close in proximity to the 32nd Avenue & Clement Street Fresh & Easy store opening early next year for both stores to do well, in our analysis. One store would probably cannibalize sales of the other, which is something that's been happening with some of the Fresh & Easy stores that are located too close to each other in Southern California, Arizona and Nevada.

The Mission District Delano's store offers some potential for Tesco's Fresh & Easy. However, based on a number of factors, it's our analysis the location would be a real uphill struggle for the Fresh & Easy format.

[Also: click here , here and here for a selection of past stories on Fresh & Easy and Northern Calfornia.]
Posted by Fresh & Easy Buzz at 3:14 PM