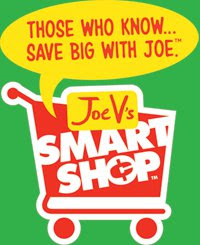 Texas supermarket chain H-E-B opened its second Joe V's Smart Shop discount grocery store today. The store, like the flagship Joe V's which opened in May of this year, is in Houston, Texas. It's at Wallisville & Uvalde in East Houston, across town from Joe V's Smart Shop number one. Here's the grand opening ad.

The first Joe V's Smart Shop store, which is at 12035 Antoine Drive in Houston, was a test of the limited assortment discount format by H-E-B. The format passed the test, at least as far as doing good enough in Houston to warrant a second store in the city, according to Jose Villarreal , Joe V's general manager.

Shortly after the first store opened in early May of this year, iconic grocery chain Trader Joe's filed a lawsuit against H-E-B, asking a judge to order the grocer to cease from using the Joe V's Smart Shop name, arguing that it infringes on the Trader Joe's trademark. We're told the case is still pending. However, the court denied Trader Joe's initial request to order H-E-B not to use the Joe V's name pending a resolution of the lawsuit.

Although Texas-based H-E-B doesn't say it's the case, the grocer developed Joe V's in-part because of the movement of hard-discount grocer Aldi USA into its home market in 2009. Germany-based Aldi continues to open new stores in the Lone Star State, where it plans to have a significant presence.

H-E-B isn't a discount food and grocery retailer like Aldi is. Its two primary formats are superstore (H-E-B) and upscale-specialty (Central Market). However, there's only so much share of stomach and pantry, even in Texas. Therefore H-E-B, which has done an excellent job over the years with its superstores taking on mega-retailer Walmart in its home state of Texas, wants a discount format that it can strategically position against the Aldi small-format, hard-discount stores opening throughout the state. That format appears to be Joe V's Smart Shop - at least to the tune of two stores in Houston so far.