Serendipity and Opportunity + Planning, Innovation and Hard Work = A Formula For Success For John Mackey and Whole Foods Market

Sometimes the light's all shinin' on me
Other times I can barely see
Lately it occurs to me
What a long, strange trip its been...

- Truckin' - The Grateful Dead (Listen to the song)

This weekend, Austin, Texas-based Whole Foods Market, Inc. is celebrating its 30th birthday. In a spirit similar to the lyrics above from the Grateful Dead song, Truckin', Whole Foods' 30-year journey has been a "strange trip," in the 1960's definition of the term. However, it hasn't been all that long. But in its fairly brief 30-year history, the grocer has achieved more, both quantitatively and qualitatively, than most food and grocery retailers do in a lifetime.

It was just 30-years ago, on September 20, 1980, when 25-year-old John Mackey, sporting bushy red hair and a matching mustache (see the link to the video below to see the young Mackey), and partner Renee Lawson Hardy, along with 19 store team members, opened the first Whole Foods store in Austin, Texas.

That first store wasn't even called Whole Foods Market. Instead, the name was 'Safer Way Natural Food Store,' a suggestion the market would be a "safer," alternative - as in offering healthier foods - the then, and still, giant supermarket chain with a similar name. That's pure Mackey. Iconoclastic from the start. 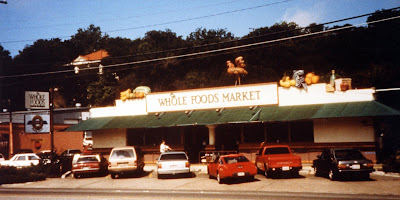 The first Whole Foods Market (banner) store, pictured above, came later, in 1981. (You can watch a video about the store here.)

Renee Lawson Hardy later left Whole Foods. But many others joined Mackey for his great adventure in natural, organic, healthy and upscale food and grocery retailing.

One of those who joined him, in 1989, is Walter Robb, who was named Whole Foods Market's co-CEO earlier this year.

The story of Robb's joining Whole Foods Market is worth telling, as it exemplifies the 'Serendipity and Opportunity + Planning, Innovation and Hard Work' formula, which in many ways sums up John Mackey's 30-year journey with Whole Foods, which next Wednesday will hit the 300 store mark. Those 300 stores are in 40 U.S. states. And in addition to the U.S., the natural/organic grocer, which now has $8 billion-plus in annual sales, has stores in Canada and the United Kingdom.

After owning his own small natural foods market, Mountain Marketplace, in Weaverville, in Northern California's north coast region for 10 years (1976-1986), then managing one of the two then popular (and now closed) Living Foods natural foods stores in Marin County for a couple years, Robb struck out on his own as an independent marketing and sales agent for various natural and organic foods companies in Northern California, where he lived. [Take a look at Walter Robb in the produce section of his Mountain Marketplace store.]

At the same time he acquired the lease on a plot of land in Marin County's Mill Valley. On the plot was a vacant metal Quonset Hut that was previously home to an independent butcher shop called Jerry's Meats. Robb's plan was to renovate the building and open his own natural foods store at the location.

But circumstances - and John Mackey - intervened. Mackey, chomping at the bit to expand Whole Foods Market further in Northern California, offered Walter Robb a deal: Sell the lease to Whole Foods, take charge of designing the store, and become its manager. Robb said yes. The store, the 14,000 square-foot Whole Foods unit on Miller Avenue in Mill Valley, opened in 1991, less than a year after construction started.

Robb went on to become the president of Whole Foods' Northern California region, a position he held for a number of years. He then was promoted by Mackey to a corporate executive position, then made Whole Foods Market's Co-president. Earlier this year Robb joined John Mackey as co-CEO. [See: Newly-Named Whole Foods Market CO-CEO Walter Robb Comes Full Circle With the Opening of the New Store in Mill Valley CA.]

Serendipity played a huge part as well. Had the stars been in a slightly different formation, Robb might have said no to Mackey, and opened the Mill Valley store as his own natural foods market. But opportunity, followed by planning and hard work, struck.

The corporate co-CEO arrangement has a history of being less than easy. That's one reason you don't see it often. But Mackey and Robb appear to work well together. Perhaps the history described above has a little to do with their good relationship.

The two co-CEO's, who balance each other well, were interviewed today by Austin, Texas television station KVUE for its evening newscast. You can view the two-minute video of the newscast piece here.

For its birthday celebration, Whole Foods has created a virtual shopping cart full of information about its first 30 years. At this link, you can view fact sheets, a photo album, which includes pictures of the 'Safer Way' store and the first Whole Foods Market banner store, videos and more, all charting John Mackey's and Whole Foods' grocery retailing journey over the last 30 years. We suggest looking through the materials. They're among the best we've seen a grocer produce for its birthday, be it a 30th or 100th anniversary.

Additionally, Whole Foods is holding a variety of special events and promotions for its 30th birthday this weekend. To see what's happening click here.

Fresh & Easy Buzz writes often about Whole Foods. You can read a selection of our stories here. (In an upcoming piece, we'll look at what the next 30 years might hold for Whole Foods Market.)

But our focus today, primarily, is to wish the innovative grocery chain - and founder and co-CEO John Mackey - a happy birthday.

Mackey, with Walter Robb now sharing the CEO duties, is still combining Serendipity and opportunity with planning, innovation and hard work. John Mackey also continues to speak out on various issues of the day, ranging from health care reform to labor unions and much more, from his Libertarian perspective

"We're going to do five wellness clubs where we're going to have intensive educational programs, a healthy dining club. Once you graduate from the club, you'll get a membership card that will give you discounts on produce and other really healthy items we sell."

The next 30 years should be very interesting for Whole Foods Market - and the grocery retailing business.

U.S. food and grocery retailing has been made better (and consumers have benefited too) - and far more interesting - having Whole Foods Market and John Mackey around for the last 30 years. May there be many more birthdays for the Whole Foods team.

Thanks for the story about Robb and Mackey. I didn't know that's how it came about.

Congratulations John! Having a vision and surrounding yourself with amazing, passionate,  smart, caring  people. That's how it's done. Having a tough skin and being incredibly competitive helps ;-)

Gosh, and we knew her when she was just a little tyke kissing all the Wild boys! Cute how they grow up so fast!