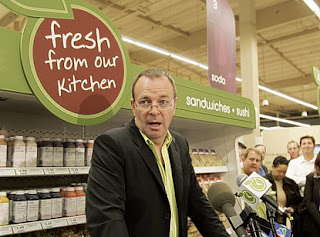 "We've identified 70 opportunities [new store locations] in Los Angeles, Mason told a meeting of the Valley Industry & Commerce Association of the San Fernando Valley (VICA) yesterday. "If we can open those 70 opportunities, that will be 1,400 jobs, as well as 300 construction workers per-site. We’re eager to invest and we want to get on," he told the group. Mason was the guest speaker at the business association's 61st Annual Meeting yesterday.

VICA is one of the most influential business advocacy organizations in Southern California. It focuses on economic and legislative issues in the Los Angeles region, advocating for San Fernando Valley business interests among local and regional governmental bodies, as well as at the state and federal levels.

Mason reached out to the region's business and political leaders at yesterday's meeting, asking for their support in helping Fresh & Easy to expand in the Los Angeles area, saying the grocery chain needs assistance navigating what he called the various challenges it faces in growing its store-count in the region. According to Mason, those challenges include: government paperwork (the length of time it takes to receive gain approvals and obtain appropriate permits, for example); high infrastructure costs; a lack of quality store sites and properties; and the cost of utilities (in operating a grocery store).

Mason also used his talk at the meeting yesterday to pitch Fresh & Easy as an affordable and healthy grocery shopping choice for residents of Los Angeles - and elsewhere. He told the group the small-format Fresh & Easy stores offer affordable, healthy food solutions, mentioning that some of the stores, like the units in south Los Angeles and Compton, are located in communities previously under served by grocery stores offering fresh foods and other products at decent prices. Those are areas commonly referred to as "food deserts." He also mentioned the grocery chain's efforts to be a sustainable food and grocery retailer.

"We offer ourselves [Fresh & Easy Neighborhood Market] as part of the solution to help create sustainable communities and help families eat better and lead healthier lives," Mason, who's a corporate officer and director of United Kingdom-based Tesco, as well as being the CEO of its Fresh & Easy Neighborhood Market in the U.S., told those attending yesterday's meeting.

Mason has made few public appearances or offered himself to the media for interviews since about mid-2009. That's in contrast to mid 2007 -to- early 2009, when the Fresh & Easy head was out regularly pitching the then brand new fresh food and grocery chain to all who would listen.

Perhaps his appearing as the keynote speaker at yesterday's Valley Industry & Commerce Association Annual Meeting, which is attended by many political as well as business and industry movers and shakers in the region, portends the beginning of a higher public profile for the Tesco director and Fresh & Easy Neighborhood Market CEO, who soon will get a promotion and new title.

In March of next year Mason will get the title of Co-CEO of Tesco, along with being given some added Tesco corporate responsibilities, although he will remain in the U.S. at Fresh & Easy's headquarters in El Segundo, along with keeping as his main charge running Fresh & Easy as its CEO.

Besides continuing to lead Fresh & Easy Neighborhood Market, beginning in early March 2011, Mason will take on the responsibility for Tesco's global marketing/corporate branding and its sustainability and climate change initiatives.

The new title and added responsibilities are the result of the retirement of Tesco CEO Terry Leahy, who is leaving the company in early March of next year.

Philip Clarke, currently Tesco's head of European and Asian operations and corporate information technology, will take the reins from Leahy as Tesco's new CEO in March 2011.

Although Mason is getting the Tesco Co-CEO title, he won't share those duties with Clarke, accept for having the added corporate responsibilities noted above. Clarke will be operate as Tesco's chief executive, although unlike Leahy, he will have some shared responsibilities with Mason.

Tesco has set the end of its 2012/13 fiscal year as the time in which Fresh & Easy needs to break even. That gives Mason and his team somewhat over two years to achieve that goal, which at present - Fresh & Easy reported in October that's its operating margin is a negative 38%, for example - can best be described at present as being a tough and long slog.

Mason has decided to focus nearly all of Fresh & Easy's growth in California next year. Based on our reporting at present, we estimate the chain will open 35-40 new stores in calendar year 2011, with the overwhelming majority of the new units being opened in Southern and Northern California. No more than a couple-to-a-handful of new stores will be opened in Arizona in 2011. Few if any new stores at all will be opened in the Las Vegas, Nevada region next year.

Tesco's Fresh & Easy currently operates 155 stores, down from 165. The grocer closed 13 under-performing stores - six in Arizona and Nevada respectively and one in Southern California - in November. [See here for details.]