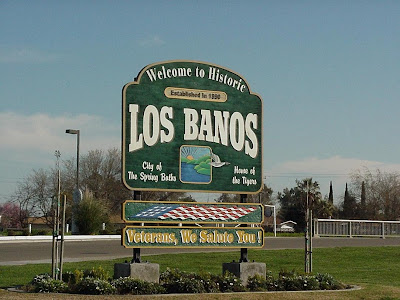 Los Banos is considered part of Northern California, although it's right on the border-line. Cities south of Los Banos, like Fresno, are more properly referred to as being in Central California.

The City of Los Banos Planning Commission approved Fresh & Easy's site plan for the store on Wednesday, May 26. The commission also approved the use of an off-sale wine and beer sales license, which Fresh & Easy has applied for with the State of California, for the location.

The site plan approval is based on a set of design and other related conditions [see here] that Fresh & Easy Neighborhood Market and its store designers and building contractors must follow. The approval also expires in one year if Fresh & Easy doesn't obtain a building permit in that time period, although there is an option to extend the approval for an additional year.

According to the city's planning department staff, neither Tesco's Fresh & Easy or its representatives have said when construction of the store would begin. Fresh & Easy Buzz would be surprised is the grocer breaks ground on the site this year.

The future Fresh & Easy store will be in an existing shopping center, The Los Banos Marketplace, at 1420 E. Pacheco Boulevard. The center's major tenants include Walgreens, Starbucks, Quiznos and Jack in the Box.

There's a vacant building on the 1.22 acre site earmarked for the Fresh & Easy market. According to the planning commission documents, the grocer plans to demolish the building and build the 13,969 store from the ground up. Tesco's Fresh & Easy Neighborhood Market has purchased the 1.22 acre parcel.

Among the local (Spanish-Mission style) design characteristics and features of the Fresh & Easy store are: a tiled roof, arched entry doors and window openings, arcaded porches, a walled garden, towers and accentuated corner parapet elements, varied roof heights, and ornamental brick to enhance the Spanish-Mission architecture motif. [Tesco's Fresh & Easy Neighborhood Market went through a lengthly hearing process in 2008 regarding a proposed store in Sacramento's Oak Park neighborhood, which the grocer to date hasn't broke ground on. We wrote a series of stories on the issue, which you can read here.]

Los Banos, which is the second-largest city in Merced County after the city of Merced, is about 72 miles from Fresno, where Tesco's Fresh & Easy has a number of stores.

Additionally, Los Banos is about a 90 minute drive to San Jose in the southern Bay Area, and about two and a half hours (about 130 miles) from both Sacramento and San Francisco.

It's proximity to San Jose has made Los Banos a major commuter city over the last decade because housing costs are 50%-60% (or higher) less than they are in the San Jose Metropolitan region. In fact, Los Banos has been hit so hard by the housing foreclosure crisis since 2008 that houses which sold in the $300,000 -to- $400,000 range in 2006 are today selling for almost half that amount. Merced County has been among the top five counties in the U.S. for housing foreclosures for nearly three years.

According to published data, the housing market in Merced County and Los Banos is beginning to pick up, although it's got a very long way to go. Additionally, unemployment in the county, which is primarily an agricultural and agribusiness-based economy, is 19.9%, according to the most-recent state figures, making it among the highest of all California counties. California's overall unemployment rate is currently 12.6%.

Locating a store in Los Banos is something we predicted Tesco's Fresh & Easy Neighborhood Market would do as far back as 2008. It's part of what we call Fresh & Easy's Northern California and Central Valley "critical mass" store location strategy, which is modeled after what the grocer has been and is doing in Southern California, Metropolitan Los Vegas, Nevada and Metro Phoenix, Arizona. Essentially, the strategy is to first grab store sites in the major cities in a given region, then fill in with locations in nearby suburban and smaller cities. It's also further evidence the grocer has an urban, suburban and rural store location strategy.

In Northern California, Fresh & Easy first concentrated on securing store locations (37 confirmed sites but additional unconfirmed locations we've reported on) in the San Francisco Bay Area and the Metropolitan Sacramento region's major cities and larger suburban towns. It then has been slowly branching out to smaller cities in the regions.

Fresh & Easy is also looking at potential store locations near Los Banos and elsewhere in Merced County and the Northern Central Valley, which includes the Modesto and Stockton Metro regions, as we've detailed in our ongoing reporting. For example, the grocer is looking at potential sites for Fresh & Easy stores in the Merced county cities of Merced and Atwater. Both cities are about 25 miles from Los Banos.

The fact Tesco is continuing to book future store locations in Northern California, despite having yet to open any of its stores in the region, should put to rest any rumors out there it plans to fold up shop with its Fresh & Easy Neighborhood market any time in the near future, despite the fact it recently reported another full-year loss of over $250 million for the chain.

In past analysis pieces in Fresh & Easy Buzz of the Central Valley region and its various grocery retailing markets we've identified Los Banos as a city that's underserved by grocery stores, based on our research and analysis.

There are currently 159 Fresh & Easy fresh food and grocery stores in California (Southern California and the Bakersfield and Fresno regions in the Central Valley), southern Nevada and Metropolitan Phoenix, Arizona.

No new Fresh & Easy stores are being opened this month. Additionally, the grocer hasn't (as of May 29) announced if it plans to open any stores in June.
Posted by Fresh & Easy Buzz at 4:15 PM