Tony Bennett Has Nothing on Whole Foods Market When it Comes to Loving San Francisco...That City By the Bay 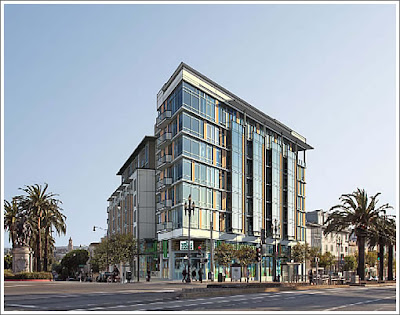 Singer Tony Bennett, who's signature song is "I Left My Heart in San Francisco," has nothing on Whole Foods Market when it comes to loving that cool, grey 'City by the Bay.'

In this May 9, 2010 story - A Whopping 15 of Whole Foods Market's 41 New Stores in Development are in California - And Nine of The 15 Are In Northern CA - we reported that 15 of Whole Foods Market, Inc.'s current 41 new stores in development in the U.S. are in Northern California, with all but one of those 15 units being in the nine-county San Francisco Bay Area, home to about 7 million residents. Since we published the story, one of the 15 stores in development - the Mill Valley unit on Blithedale (the second Whole Foods' store in the city) has opened. [See our June 14, 2010 feature story: Newly-Named Whole Foods Market CO-CEO Walter Robb Comes Full Circle With the Opening of the New Store in Mill Valley CA.]

One of the 15 Northern California stores (14 are in the Bay Area) in development included in our May 9 piece is a future Whole Foods Market unit in San Francisco's Castro District. Since we ran the story, we've learned considerable details about the store's location. And the future store will be a good one for Whole Foods, based on those details, and our knowledge of the market and neighborhood.

The future Whole Foods Market store, which will be at 2001 Market Street (at the corner of Dolores Street) in San Francisco, is part of a major sustainable and neighborhood-oriented mixed-use (residential-commercial) development called 2001 Market. The project is a partnership between The Prado Group real estate development company, Whole Foods Market, architect's William McDonough + Partners and BAR Architects, and Lanscape design firm April Phillips Design Works. 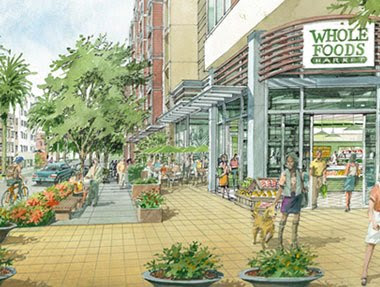 The 2001 Market development is proposed as an urban mixed-use project which offers high-quality housing located above a planned 30,000 square-foot neighborhood-oriented Whole Foods Market store. The Whole Foods' unit is being designed to be neighborhood and pedestrian friendly, including having features like bicycle parking, so shoppers in the neighborhood, which has lots of foot traffic, can bike back-and-forth to the store.

The neighborhood is actually more commonly referred to as Upper Market rather than the Castro District, which is next door. But the two areas overlap, so are often referred to synonomously.

Here's how the developer and design team describes the development's mission:

"The goal of the 2001 Market project is to bring people, housing, community-serving retail, and social vitality to this prominent corner site. With sustainability as a core value."

The development, which as currently planned has 82 residential condominiums above the 30,000 square-foot ground floor Whole Foods Market store, would replace what is the currently vacant S&C Ford auto dealership. The auto dealership has been vacant for some time, and the City of San Francisco is anxious to see the site developed. The grocer is the retail anchor for the development.

Developer The Prado Group says it expects to present the plans for 2001 Market to the San Francisco Planning Commission in September 2010. If approved, the developer and design team plan to start construction in mid-2011, with a target date for the Whole Foods' store opening in early-2012, followed by the 82 residential units coming on line in mid-2012.

[You can learn additional details about the project, including viewing a number of artist renderings of the proposed development and ground floor Whole Foods market store, at the developer's 2001 Market website.]

The Noe Valley store is the newest Whole Foods Market unit in San Francisco, having opened in late 2009. The 14,000 square-foot store is already doing nearly $600,000 in weekly sales, according to our sources.

The Noe Valley neighborhood is highly dense. It's also home to many professionals who have among the highest average-income levels in the city.

The store, which previously was home to a Kroger-owned Bell Market, which was part of the Cala/Bell chain that Kroger folded up in the Bay Area, selling some stores and closing others, is the only substantial grocery store in the highly-populated neighborhood, which also has perfect Whole Foods Market demographics: a high-percentage of college educated residents, thousands of foodies and organic food devotees, and an abundance of young professionals.

Whole Foods Market plans to open a fifth store in the City by the Bay, either at the end of 2010 or in early 2011. That unit will be in the Haight-Ashbury neighborhood, located in a building that previously was home to a Kroger-owned Cala Foods store. The 2001 Market store will make five Whole Foods units in San Francisco.

The Austin, Texas-based natural and organic foods grocery chain is also looking for additional store locations in San Francisco, as it is throughout the Bay Area and in Northern California, beyond the 15 stores in the region it currently has in development.

Meanwhile, Tesco's Fresh & Easy Neighborhood Market - which has three planned future store locations in San Francisco (two confirmed and one we've reported exists but is unconfirmed by the retailer) - 18 (confirmed) in the Bay Area, and 37 (confirmed) in Northern California as a whole, has yet to say when it plans to start opening some of its stores in the region. Based on our recent reporting, the grocer could announce its plans for Northern California by the end of this month. [June 26, 2010: Tesco Planning to Announce in July When First Northern California Fresh & Easy Neighborhood Market Stores to Open]

It's been well over two years since Tesco announced its planned 37 Fresh & Easy store locations in Northern California. The grocer originally planned to start opening some of the stores in late-2008/early-2009 but has continued to postpone the launch.

Meanwhile, in the two-plus years since Tesco's Fresh & Easy Neighborhood Market announced its plans - and 37 stores - in Northern California, much change - and growth by competitors - has occured in the market region.

>Modesto, California-based Save Mart Supermarkets completed its acquisition of the nearly 200 Albertsons supermarkets it purchased from Cerebus-owned Albertson's LLC, rebranding all the stores to the Lucky banner, as well as remodeling a number of the stores. The majority of the Lucky stores are in the San Francisco Bay Area and Metropolitan Sacramento regions - the two areas where the 37 future Fresh & Easy stores are located. Save Mart is now the number two market share leader in both of these markets. It's second to Safeway Stores, Inc. in the Bay Area and number two after market share leader Raley's in the Sacramento region.

>Bay Area-based Safeway Stores, Inc. has expanded and remodeled numerous supermarkets in Northern California - and has many more remodels in the works. The grocery chain also opened its first small-format (actually "smaller-format," since at 21,000-24,000 square-feet its considerably larger than the first unit, in Long Beach, California, which is about 15,000 square-feet) "The Market" store in San Jose, California (summer 2009). Safeway also has a handful of new stores proposed for Northern California, including a new flagship supermarket in the east Bay Area city of Pleasanton, where its corporate headquarters is located.

>Walmart Stores, Inc. has converted some of its discount format stores in Northern California into hybrid supercenters, which offer a complete selection of fresh food and groceries. More conversions are planned by Walmart, if it can get approvals by local governments. The retailer also has numerous new supercenters planned throughout Northern California, particularly in the Central Valley, in cities like Stockton, Ceres, Patterson, Livingston, Atwater and others.

Additionally, as we've previously reported, Walmart is in the market for vacant big box store buildings, ranging in size from about 75,000 -to- 100,000 square-feet, in the Bay Area. The retailer plans to turn these buildings into smaller-than traditional-size supercenters like the one it opened in the Central Valley city of Modesto in 2008. [See - May 6, 2010: Going Smaller & Getting 'Hybrid': Walmart's Smaller Supercenter in Vacant Retail Buildings Strategy Began in 2008 plus the links at the bottom of the post.]

Speaking of Whole Foods - we think it's safe to say the grocer (and based on our snapshot above, numerous other grocers) is bullish on Northern California, and the Bay Area in particular. It's also fairly clear Whole Foods Market, like Tony Bennett, loves San Francisco - that cool, grey City by the Bay.

May 15, 2008: Fresh But Never Easy: Tesco's Long But Rapid South-North March in the Nation-State of California