Pacifica, CA Mayor Jim Vreeland Says He's Excited to Have Fresh & Easy Store Coming to Pedro Point; Says New Center Will Be One of the Best in Town 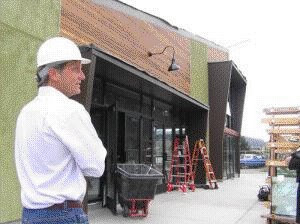 On Tuesday, October 7 we reported in this story, "Fresh & Easy Corporate Reps to Meet With Pedro Point Pacifica, CA Neighborhood Residents to Address Concerns Over Store to Open in 2009," about a meeting to be held (and it was) last night between residents of the San Francisco Bay Area city of Pacifica's Pedro Point neighborhood and one or more representatives of Tesco's Fresh & Easy Neighborhood Market. The grocery chain is building a store in a new small shopping center in the neighborhood as part of its move into Northern California in 2009. The Fresh & Easy store is one of three businesses going into a remodeled building.

The meeting was requested by the Pedro Point Community Association which is a group comprised of residents of that neighborhood in the city of about 40,000 located about 12 miles from San Francisco on the pacific coastline.

The meeting was held last night at the Point Pedro Firehouse, which is a historic building maintained by the Pedro Point Community Organization.

Fresh & Easy Buzz is currently working on a piece about last night's meeting between the Point Pedro neighborhood residents and the Fresh & Easy Neighborhood Market spokesperson.

This morning's edition of the Pacifica Tribune, a local newspaper in the city, just happens to have a story about Fresh & Easy's Pacifica store and the new development it is located in. The Tribune story features an interview with the city's mayor, Jim Vreeland, who is looking forward to Fresh & Easy and the other businesses opening in the center next year.

In the story, Mayor Vreeland talks about the economic boost he believes the $7 million dollar center will bring to Pacifica, along with discussing how the project has and will in his view greatly improved the Pedro Point neighborhood.

There's no mention in this morning's story in the local Pacifica newspaper about last night's meeting between the Fresh & Easy Neighborhood Market spokesperson and the Pedro Point neighborhood residents however, accept for the one sentence note below in italics at the bottom of the story: The Pedro Point Community Association has engaged Mark Warden, a spokesperson from Fresh & Easy, to speak at its meeting Thursday, Oct. 9 at 7:30 p.m. at the Pedro Point Firehouse, 1227 Danmann Ave. Perhaps the story was filed before the paper could attend, cover and report on last night's meeting?

Additionally, the city's mayor doesn't mention anything at all in the story about the numerous concerns those residents who live in the Pedro Point neighborhood have about certain aspects of the Fresh & Easy store, along with their numerous concerns about the shopping center in general. It would appear If he was asked about the neighborhood resident's concerns, he either didn't answer or his answers didn't appear in the story this morning. We have no idea though if he was asked by the paper about the neighborhood resident's concerns or the meeting last night. Mayor Vreeland lives in the Pedro Point neighborhood.

At the top of the neighborhood resident's concern list includes the increased traffic congestion some say will come when the new center and the Fresh & Easy store opens. Some members of the Pedro Point Community Association want the city and Fresh & Easy to improve the traffic conditions near the center in the primarily residential neighborhood.

Some neighborhood residents have additional concerns, as we reported here in Tuesday's story, which they feel should be of interest to both the mayor and Tesco's Fresh & Easy.

None of the neighborhood residents have told Fresh & Easy Buzz they are against the center or the Fresh & Easy store being built in it their neighborhood. Rather they say they have numerous concerns, which are detailed in our October 7 story.

Below is the story from this morning's Pacifica Tribune. We will be publishing our piece on last night's meeting between the Pedro Point neighborhood residents and the spokesperson for Fresh & Easy a bit later.

The construction underway at the Pedro Point Shopping Center represents a vast improvement to the property and will allow a Fresh & Easy Neighborhood Market to move in as the key tenant.

Smaller than a supermarket, Fresh & Easy Neighborhood Markets is a chain of, so far, 82 markets in Southern California, Arizona and Nevada in the United States. It is a subsidiary of Tesco, a large retailer in Britain. The stores offer staples, gourmet items, prepared meals and organic selections among the many products and produce it stocks.

The construction improved a portion of the Pedro Point Shopping Center owned by SHP Pacifica LLC. The remainder belongs to a different owner.

Major Jim Vreeland toured the construction site with Deed Whitney, managing partner of Whitney Partnerships, who is developing the site on behalf of the property owner. Also present were representatives from The Bergman Companies, the construction, architectural and design and development firm that is assisting Fresh & Easy.

"This is going to be one of the best commercial spaces in town," Vreeland said, noting the project represents an investment in excess of $7 million in Pacifica. "The city is thrilled with the $7 million investment in town and we're really excited to have Fresh & Easy in a year."

Whitney said the goal for the project is to attain a silver certification in the LEED green building standards.

"We've made a significant investment bringing this building up to date. It is the only project in Pacifica currently registered under the U.S. LEED program for green building. We've been environmentally conscious. We're happy with the results. It exceeded our expectations," Whitney said.

The building has been remodeled for three tenants, with Fresh & Easy taking up the biggest space. The other two tenants have not yet been determined, Whitney said, but his firm has been receiving numerous phone calls from interested parties.

There might be restrictions on a full-service restaurant tenant, as that use would require applying to the city for a variance for parking. The parking was designed for a commercial operation, but an ice cream shop or a coffee shop would be suitable. The sidewalks have been widened. There is an opportunity for outdoor seating for the corner tenant.

The work on the building is substantially complete, with only parking lot work remaining, Whitney said. He expects to turn it over to Fresh & Easy within a couple of weeks. Fresh & Easy will then build out the interior space to suit its needs.

The Pedro Point Community Association has engaged Mark Warden, a spokesperson from Fresh & Easy, to speak at its meeting Thursday, Oct. 9 at 7:30 p.m. at the Pedro Point Firehouse, 1227 Danmann Ave.
Posted by Fresh & Easy Buzz at 1:17 PM

I sure hope the store doesn't kill business for the independent Pacifica Farmers Market store in town. The owners are wonderful and the prices on fresh produce are hard to beat.