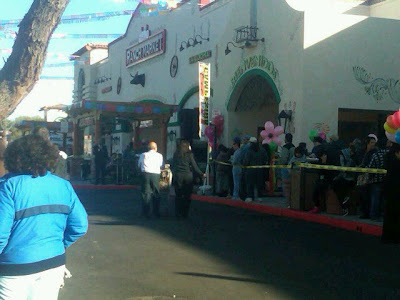 Five of the seven Arizona Pro Ranch Markets stores are in Phoenix. Two of the units are located in the nearby cities of Mesa and Glendale.

There are two additional Pro's Ranch Markets supermarkets own by the grocer - one in Albuquerque, New Mexico and another unit in El Paso, Texas.

Provenzano, who's nickname is "Pro" and who's corporate entity is called "Pro & Sons," opened his first Latino format Pro's Ranch Markets supermarket in Phoenix in 2002. The grocer has opened a new store in the market nearly each year since then.

Pro's Ranch Markets is headquartered in the Southern California city of Ontario, even though the grocer no longer operates stores in California.

Provenzano and his sons originally operated stores in Southern California and in the Bakersfield area in the Central Valley, along with in Arizona, New Mexico and Texas. However, the company recently sold off the last of its California stores, two in Bakersfield, to Southern California-based Vallarta Supermarkets, which like Pro's Ranch Markets is a family owned, multi-store grocery retailer.

Provenzano Sr. says the chain's future focus will be on Arizona, New Mexico and Texas - and perhaps one or two other western states where Pro's Ranch Markets doesn't yet have stores. However, the grocer says it has no plans to open stores again in California, where it's corporate headquarters remains. Pro's Ranch also has a regional office in Phoenix, Arizona, where it coordinates operations for the now seven stores in the metro area.

In addition to operating the nine Hispanic format Pro's Ranch supermarkets, the Provenzano's have diversified the company into other types of retailing. Under the Pro's Ranch corporate structure the family also operates two laundromats in Phoenix - Ranchie Laundromat Phoenix #3 and Ranchie Laundromat Phoenix #4 - which are named after the grocer's mascot, Ranchie The Bull; a restaurant called Tradiciones, which is also in Phoenix; and Ranchie Fuel, a gas station in Texas, which is also named after the popular in-house mascot.

The Pro's Ranch supermarkets are big and packed with product from every category - from fresh meats and produce to packaged groceries and all kinds of in-store, fresh-prepared foods, with a Mexican and latin flair. (Read the two past stories linked at the end of this piece for more details on the stores.) Although the markets focus on Latinos, they're also shopped by consumers from many different ethnic backgrounds.

The Latino format supermarkets are also colorful and festive. But you don't have to take our word for it. Click here to view a selection of photographs from today's opening of the new Pro's Ranch Market store at 35th & Glendale Avenue in Phoenix, Arizona.