Sacramento, California-based Raley's Supermarkets is this week introducing a new line of 23 varieties of pre-packaged, refrigerated fresh-prepared meals, entrees, side-dishes and related items under the 'Raley TO GO' brand.

Below is a list of the 23-SKUs in the new 'Raley's TO GO' pre-packaged refrigerated, ready-to-heat foods line: 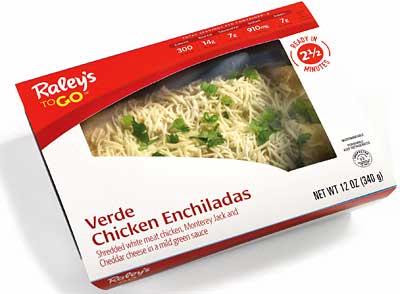 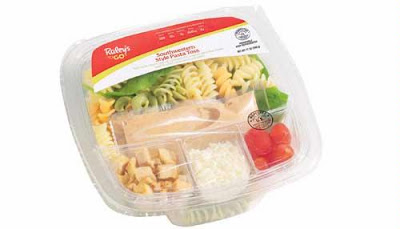 Raley's, which is an innovator and pioneer among U.S. grocery chains in the fresh-prepared foods category, is promoting its 'Raley's TO GO' line launch extensively.

For example, this week the Sacramento-based family-owned grocery chain, which operates 133 stores in Northern California and northern Nevada under the Raley's, Bel-Air, Nob Hill Foods and Food Source banners, is featuring all 23 varieties of the pre-packaged fresh-prepared foods items in a promotion, which includes special price points - $5 each for all of the items except the family size entrees, which are $10 each - along with an added bonus: When shoppers buy any four packages (mix and match) of the $5 retail items (20 SKUs total)they get a fifth one free.

The $10 each family size meals provide four-six servings, according to the packaging. All of the items are designed to take about two and one half minutes to heat in a microwave oven.

In addition to promoting its new pre-packaged fresh-prepared foods line in its weekly advertising circular, Raley's has displays featuring the 'Raley's TO GO' products, along with colorful point-of-purchase signage in the refrigerated fresh deli sections, where the items are merchandised, in all of its stores.

Raley's is also promoting the new line on the radio, such as the promotion it's currently doing with Sacramento-based radio station KYMX. The promotion, which has been running since Wednesday, offers listeners a chance to win four free 'Raley's TO GO' meals each day. The meal includes one entrée and two side dishes.

The new fresh-prepared foods line was created by Raley’s corporate chef, Evelyn Miliate, who says about her inspiration for the products: "As a mom, I understand the need to have quick and easy dinner solutions that I can rely on. With Raley’s To Go, I can feel good about feeding my family food that I know they will love – and at a great value."

The "mom" mention in chef Miliate's quote dovetails with Raley's current positioning and marketing campaign focus, which is called "It's A Mom's World" (Raley's is, that is), and based on its Mom's World Panel, which is a volunteer group of mothers the grocer has assembled to provide the grocery chain with input, ideas, dialogue and feedback. Raley's has a special Facebook page and Twitter feed for its Mom's World Panel, as well as devoting this special section on its website to the group and campaign.

Raley's, which was founded by the late Tom Raley in 1935 and is still family-owned - his daughter Joyce Raley-Teel is the chairman and majority owner and her son Michael Teel is CEO - was one of the first movers among U.S. grocery chains in terms of getting into the ready-to-eat and ready-to-heat fresh-prepared foods category. It's been one of the food retailing leaders in the category since then.

Since the 1980's Raley's has offered an extensive selection of fresh-prepared foods in its stores. That offering has grown even more extensively in terms of the variety of fresh foods available. For example, the stores feature everything from simple ready-to-eat grab-and-go items like sandwiches and salads and ready-to-heat comfort foods, to a wide-variety of prepared ethnic foods and complete restaurant-quality gourmet dinners.

Raley's merchandises its fresh-prepared foods in both bulk deli-case-style form and pre-packaged. For example, sandwiches can be bought pre-packaged our ordered from the deli counter, where a clerk makes them by hand sandwich shop-style. Salads, meals, entrees and side-dish items are also available in both bulk and pre-packaged forms.

The 'Raley's TO GO' line of pre-packaged fresh, refrigerated foods is clearly designed to tap into the "on the go" shopper who doesn't want to order and wait at the deli counter for her fresh-prepared foods purchases. Raley's already offers numerous ready-to-eat and heat pre-packaged foods items, as mentioned above, but the new 23-item line is the most extensive introduction of convenience meals and related items the grocer has launched to date, based on our long time observation of Raley's.

United Kingdom-based Tesco's incoming CEO Philip Clarke (March 2011), who's currently head of the global retailer's international operations in Europe and Asia but not its Fresh & Easy Neighborhood Market fresh food and grocery chain in the U.S. (Tim Mason is CEO), said in an October 6, 2010 conference call reporting the Tesco plc's half-year sales that one of Fresh & Easy's advantages in California, Nevada and Arizona where it has its 168 stores is that the competition doesn't have the fresh-prepared foods offering that the Tesco-owned chain does.

Taking his statement as face value, that it isn't spin, which we do, it would appear Clarke isn't getting good competitive intelligence from Fresh & Easy Neighborhood Market headquarters in El Segundo, California when it comes to the fresh-prepared foods category and its competitors.

Additionally, based on his October 6 statement, it would also appear Clarke's not directly familiar with the numerous competitors (and soon to be competitors in Northern California in early 2011) to Fresh & Easy - Safeway/Vons, Walmart, Ralphs, Fry's, Raley's, Whole Foods Market, Trader Joe's, Bristol Farms, Bashas, Sprouts Farmers Market, Henry's Farmers Market (we could go on but will stop there) that offer extensive fresh-prepared foods selections in their respective stores and continue to add more variety and quantity to the offerings.

Memo to incoming Tesco CEO Philip Clarke: It's a fresh-prepared foods competitive jungle out there. Fresh & Easy's competitors in the category are many - and growing. Fresh & Easy has a good category offering - but it's just one among many competitors.

Raley's new 'Raley's TO GO' line of 23 varieties of pre-packaged fresh-prepared foods is merely one example of this growth, along with the continuing development in the category among grocers throughout the U.S.