City of Commerce, (Southern) California-based Smart & Final opened the first of its new format SmartCo Foods food and grocery stores in Denver, Colorado on Wednesday, June 23 -- and on grand opening day of the 57,000-square-foot store, located at 1442 South Parker Road (at East Florida Avenue) in Denver, Smart & Final's president, Dave Hirtz, made additional news, telling members of the press and others that Smart & Final plans to open SmartCo Foods stores in California and Arizona later this year. 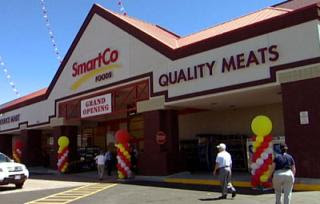 SmartCo Foods is a brand new format for Smart & Final, although more correctly it's a hybrid of the retailers current three formats - its small-format Smart & Final non-membership warehouse stores, it's natual and organic foods-focused Henry's Farmers Market, and its Smart & Final Extra smaller-format supermarkets.
The 57,000 square-foot Denver SmartCo Foods store, which is in a vacant Albertsons supermarket is one part supermarket (Smart & Final Extra), one part warehouse club (Smart & Final club format), and one-part farmer's market (Henry's).
The format and store offers basically everything a regular supermarket does in terms of departments and products, although the SKU count is a bit less (about 30,000 total SKUs) than traditional supermarkets operated by say Safeway Stores or Kroger offer. But in addition to regular pack groceries, SmartCo also features a club-pack department (pictured above), which is nearly as big as the 15,000 -to- 20,000 square-foot flagship Smart & final banner non-membership stores the retailer operates.
Additionally, borrowing from the Henry's Farmers Market format, the produce department in SmartCo Foods is expansive, and is designed to look like a version of a farmers market. The department offers both conventional and organic fresh produce items. Another leaf SmartCo Foods takes from Henry's is that the store features a bulk foods department. SmartCo also offers nearly the complete selection of the retailer's Sun Harvest private natural and organic brand, which includes products across all dry grocery and perishable categories.
The supermarket-side of SmartCo is influenced in part by Smart & Final's Extra format, as well as by the traditional American supermarket fromat in general.
Here's a look at what the store offers in terms of its departments and features:
The produce department - offers a selection of fresh fruits and vegetables, including both conventional and organic items, with a focus on value pricing. In an effort to support local Colorado growers, SmartCo Foods says it's making an effort to carry locally-grown produce, which is something its Henry's Farmers Market chain focuses on.
The meat department - is staffed by trained meat cutters. It features Cattleman’s Finest (a private brand Smart & Final uses) beef products as well as a broad selection of high-quality pork and poultry products, and fresh and frozen seafood. The meat department is self-service style. Most of the fresh meat is packaged in the department.
The in-store deli - offers ready-to-eat prepared sandwiches and other grab-and-go items, a variety of fresh salads, entress and side dishes, along with a large assortment of deli meats and cheeses.The in-store bakery - features a full-selection of breads, muffins, pastries, cakes and cookies baked fresh in-store daily.
Bulk foods - features bulk bins filled with a variety of grains, healthy snacks and other unpackaged items.
Health & Beauty - offers a full selection of conventional health and beauty products as well as Smart & Final's Sun Harvest brand vitamins, supplements and beauty care products made with natural ingredients.
Foodservice & Business - carries a large assortment of practical products, which include: catering supplies, paper and party products, straws, cutlery, portion cups, hot cups, cold cups, clear cups, serving trays, and commercial-strength cleaning supplies. The department is positioned to small business foodservice operators as well as consumers.
Warehouse Savings - features club-pack items offered primarily on an in-and-out basis, value-priced. The products include: paper goods, beverages, packaged foods and groceries and more.
At 57,000 square-feet (the other four stores set to open this year range from about 45,00o to the same size) SmartCo is Smart & Final's largest store format to date. The Smart & Final non-membership stores and range from about 15,000 -to- 20,000 square-feet, the Extra stores aren't much larger, and the Henry's and Sun Harvest stores are in the 20,000 -to- 35,000 square-foot range.
The other four Colorado SmartCo Foods stores soon to open are located at:
>5141 Chambers Road in Denver
>3615 West Bowles Ave. in Littleton
>16746 E. Smoky Hill Road in Centennial
>1750 North Main St. in Longmont
The SmartCo Foods website is here. Check out the opening week ad specials, like whole chickens for 59 cents a pound, $1.49 per-gallon milk , eggs for 79 cents a dozen and more here.
Posted by Fresh & Easy Buzz at 8:58 PM