After Four Years in the High Weeds in Northern & Central California, Kroger Co. is Emerging to Grow its Foods Co Chain 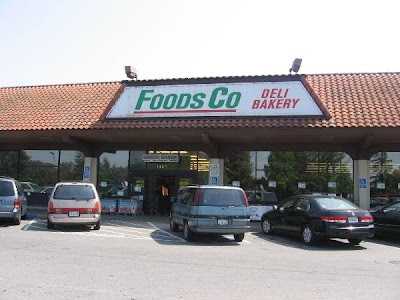 Kroger's Foods Co store in Redwood City, California. Foods Co is a price-impact chain. The format is discount warehouse but has traditional supermarket elements mixed in, making it somewhat of a hybrid. Everyday low-price is the key positioning element.

The Insider: Heard on the Street

After four years of retrenchment in Northern California by Kroger Co., which saw the retailer close its Ralphs Supermarkets division in the region in 2006 - which included selling and closing all of its Ralphs banner supermarkets and beginning to sell off and eventually close all but one (the Cala Foods unit on Hyde Street in San Francisco, which is slated to close soon) of its Cala Foods and Bell Market stores - the second-largest grocery retailer in the U.S. is in the process of making a comeback in the region, focusing on growing its Foods Co discount warehouse store chain. (Note: Harley Delano, the former president of Ralphs' Northern California division, and his son bought five of the Cala Foods/Bell Market stores. The stores - three in San Francisco and two in Marin County - operate today under the Delano's IGA Markets banner.)

Although Kroger closed its Ralphs division in Northern California in 2006, and sold off or closed all of the about 20 Cala Foods and Bell Market supermarkets (except the one) in the market over the following two years, it kept its price-impact Foods Co stores, which today number 11 in Northern California. There are five Foods Co units in the San Francisco Bay Area - two in San Francisco, one in Richmond, one in Pittsburg, and one in Redwood City. There are four Foods Co stores in Sacramento and two units in the south coast region - one in Salinas and another unit in Soledad.

There are 21 Foods Co stores in total. In addition to the 11 above, the remaining units are located as follows below.

Only the first 11 listed - the five Foods Co stores in the San Francisco Bay Area, the four in Sacramento, and the Salinas and Soledad units - are considered in the Northern California market proper. Fresno is classified as the Central Valley. Bakersfield and the Central Coast are much farther south. However, all 21 of the stores under the Foods Co banner are operated as an integrated chain by Kroger's Ralphs division, which is headquartered in Southern California.

Kroger Co. inherited most of the 11 Foods Co stores when it acquired the Ralphs/Food 4 Less chain, which was based in Southern California, from Ron Burkle's Yucaipa Company in 1999, in a mega-deal worth $13.5 billion.

In the deal here's what Kroger bought from Burkle: Southern California chains Boys Markets, Hughes Markets and ABC Markets, which were all acquired by Burkle and consolidated over a number of years into Ralphs; Cala Foods/Bell Markets and Foods Co in Northern California; the QFC chain in Washington state; Fred Meyer in the Pacific Northwest and Intermountain region; Smitty's in Arizona; and Smith's Food & Drug Co. in Arizona, Nevada and Utah. The deal is what put Kroger where it is today in terms of being the second-largest food and grocery retailer in the U.S.

With this brief history established, let's look to the future.

After four years of thinking about what if anything to do in the Northern and Central California market regions - a period in which Kroger didn't grow the Foods Co chain much if any - the retailer has now decided to move forward and open numerous new Foods Co stores, which average about 55,000 -to- 72,000 square-feet, in the San Francisco Bay Area and Sacramento regions in Northern California primarily, but also in the other existing regions.

The Foods Co store growth isn't going to be fast and furious. But but if Kroger's strategy goes as planned, based on what I've been able to learn thus far, the Foods Co new store growth program will be significant and substantial over time.

The first two new stores Kroger hopes to build and open are in the San Francisco Bay Area city of Oakland. In a story on July 17, the Oakland Tribune newspaper reported on the development in the city. Kroger has been working with city officials for nearly a year on the two projects. Read the Tribune story here.

Both of the two planned new Foods Co stores (72,000 square-feet each) are at locations in East Oakland, a low income part of the city that's underserved ("food desert") by food and grocery retailers. One unit is slated for 66th Avenue and San Leandro Street. The other store for an area called Foothill Square.

Members of the Oakland City Council have been courting grocers, including Safeway Stores, Inc. which is based in Pleasanton near Oakland, for many years, trying to get one or more supermarkets for East Oakland.

Among the other grocers the members of the Oakland City Council and its Redevelopment Agency have talked with over the past three or so years is Tesco's Fresh & Easy Neighborhood Market. Tesco has one of its 37 confirmed (and additional 14 Fresh & Easy Buzz has uncovered and reported on) Northern California future store locations in Oakland. (See our Fresh & Easy Northern California store list here). Tesco came close to doing a deal on a second location in Oakland but decided not to go forward for various reasons. The grocery chain continues to look for additional sites in Oakland.

I've known about the Oakland sites for some time, since as I mentioned the city of Oakland has been talking to Kroger representatives for many months. But what makes the development interesting now is that the two new Oakland stores are part of a real stategy by Kroger Co. to build the Foods Co chain in Northern and Central California. There's been speculation for the last four years that Kroger might sell or close Foods Co. Clearly the retailer has decided not to do so.

But Oakland isn't a solo play for Kroger with its Foods Co discount warehouse chain in Northern California and the Central Valley.

Kroger Co. also is looking for future Foods Co store locations in the Sacramento Metropolitan region and north of Sacramento. All four of the current units in the region are in the city of Sacramento.

And although its lower on the agenda list, Kroger is also interested in sites in the Northern Central Valley - the Stockton, Tracy, Manteca, Modesto and Merced Metropolitan regions.

Lastly, the retailer is looking for good sites in the Fresno and Bakersfield Metro regions in the Central Valley, along with in the Central Coast region near where it has the two existing stores, in Lompoc and Santa Maria.

Based on the information I have, the two highest priority regions for new Foods Co store locations at present are in Northern California's San Francisco Bay Area and Sacramento Metro regions, however.

Fresh & Easy Buzz has been running an ongoing series since March 2010 on the Northern California market. (See the links at the bottom of this post.) Today's column will become part of that series by virtue of its subject matter.

What is clear from what Kroger is up to with Foods Co - and what all of the grocers the blog has written about thus far in the series are up to in various ways vis-a-vis Northern California and the Central Valley - is... growth. They see loads of opportunity in the region even though it's hyper-competitive.

In late June of this year at the company's annual shareholders meeting, Kroger Co. CEO David Dillion said the retailer is interested in making selective acquisitions of healthy grocery chains located in or near its existing markets in 31 U.S. states. Kroger recently raised some cash to do just that, by the way.

The CEO said Kroger is being "highly selective" regarding such acquisitions and doesn’t want turnaround projects or "somebody else's problem." That rules out distressed chains I suppose, if Kroger keeps true to Dillion's word at the shareholders meeting last month.

All my good information right now is that Kroger's current focus and strategy in the Northern California and Central Valley, California market regions is on organically growing the number of Foods Co discount warehouse stores it operates in the markets, along with growing the overall sales of the banner.

But let's remember what Kroger Co. CEO Dillion said about "healthy" acquisitions...in or near the various markets the retailer currently operates in. I plan to take up that discussion in my next column, which will be coming soon. Stay tuned.

['The Insider,' a feature column in Fresh & Easy Buzz, runs weekly -to- fortnightly.]

Recent columns by 'The Insider'