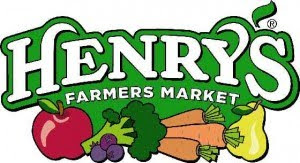 And as we detailed in this story [May 8, 2010: Sprouts, and Likely Henry's to Beat Fresh & Easy to Northern California Despite it's Big Head Start] about Henry's coming to Northern California, the hybrid grocery and natural foods chain is looking for additional locations, primarily in the Sacramento Metropolitan region but also in other parts of Northern California. A commercial real estate source in the region tells Fresh & Easy Buzz that Henry's Farmers Market representatives have recently been looking for sites in Sacramento and in the nearby city of Davis, as well as for a second location in Elk Grove.

Henry's remodeled the El Grove store, which is located at 8211 Laguna Boulevard, in a matter of months, only leasing the former Circuit City store building earlier this year. 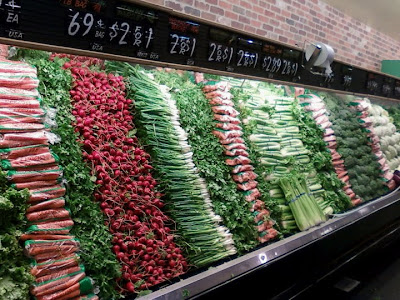 The grocer's first Northern California unit is 25,000 square-feet (about 21,000 square-feet of selling space) and like its 39 other Henry's Farmers Market (Southern California) and Sun Harvest (Texas) stores the new El Grove market features a huge, farmers market-style produce department, which comprises about 25% -to- 30% of the store's sales floor.

As we noted in this recent piece - June 5, 2010: Henry's Farmers Market Opening its First Northern California Store in August With A Big 'Local' Push - Henry's is stocking that massive fresh produce department with as much locally-grown in Northern California fresh produce as it can find, including conventional and organic items from small growers in the Sacramento and Central Valley regions.

Henry's has thus far contracted with about a dozen growers located within mere miles of the El Grove store, according to corporate nutritionist Janet Little. Among those growers includes the popular McLaughlin Farms, which is located a few miles from Elk Grove in West Sacramento.

Like all of the Henry's units in Southern California, the flagship Northern California Henry's market is a full-line grocery store. It features a meat department with on-site meat cutters, a fresh seafood department, a complete grocery and non-foods selection, perishables, an in-store deli and in-store bakery, a large bulk foods department, and a full selection of vitamins, dietary supplements and body care products.

Little says the grocer has hired about 100 employees to staff the Elk Grove store. That staffing level, significant for a 25,000 square-foot store, is because Henry's focuses on service in its various store departments as well as at the store's front-end.

Henry's will find a competitive food and grocery retailing environment in Elk Grove, which has among the highest - $82,784, according to the City of Elk Grove - per-capita income levels in the Sacramento region. Elk Grove has a population of about 132,000.

In terms of conventional supermarkets, there's a Bel-Air Foods supermarket in the city, which is a banner owned by West Sacramento-based Raley's. Bel-Air was a very popular local grocery chain for decades in the region. Raley's acquired the family-owned Bel-Air chain in the 1990's and kept the stores under the banner.

There's also a Raley's banner supermarket in Elk Grove. However, Raley's is in the process of converting the store into one of its Food Source discount warehouse format stores. That store is nearby the Henry's location, which is good news for Henry's, since Raley's banner stores offer extensive selections of natural, organic and fresh foods and the Food Source stores don't.

Elk Grove also has a Save Mart supermarket, which has fairly local roots since Save Mart is headquartered in Modesto, which is about 100 miles from El Grove.

In the discount format sector, the fast-growing WinCo Foods chain has one of its big (90,000 square-feet on average) discount supermarkets in Elk Grove, and there's a branch of another fast-growing chain, the Berkeley, California-based salvage and discount grocer Grocery Outlet, in the city. The Grocery Outlet store is near the Henry's store. It formerly housed a branch of the Sacramento Natural Foods Co-op, which closed a couple years ago.

Additionally, Walmart is in the process of beefing up its food and grocery selection at its discount format store in El Grove, and the Target discount store in the city of 132,000 recently expanded its grocery offering, as part of the chain's national program to put a greater focus on grocery retailing.

Nugget Markets, a family-owned chain based in nearby Woodland also has a supermarket in Elk Grove. Nugget is considered to be one of the best privately-held grocers in the United States, and in fact it's regularly listed near the top in Fortune magazine's 100 Best Companies to Work For annual survey. The Nugget stores are full service supermarkets and feature an extensive selection of natural, organic and specialty foods, have full-service and self-service meat departments, extensive fresh-prepared foods offerings, big fresh produce departments, and put a premium on customer service and supporting local vendors and causes in the Sacramento region.

Rounding out the list of the main food and grocery retailers in Elk Grove is its newest arrival -Trader Joe's. The iconic grocer recently opened its first store in El Grove, to much excitement from the city's residents.

Based on Henry's format - part conventional grocery store, part natural and organic products retailer, part fresh foods grocer and part farmers market - all with a fairly low-to-moderate everyday price focus, it's our analysis that it could find a niche in Elk Grove, which already has numerous grocers and sellers of food. And in the particular neighborhood where the Henry's store is opening tomorrow, it should do well.

Henry's natural and organic foods' retailing side should be a plus for it in the city. There's no Whole Foods Market store in Elk Grove, for example. The nearest Whole Foods unit is in Sacramento. And as mentioned, the Raley's supermarket nearby is being converted into a Food Source discount warehouse format market, which will be a plus for Henry's in terms of having less competition in the neighborhood in the natural and organic categories, which the Raley's stores do well at.

Tesco's Fresh & Easy announced two planned store locations in Elk Grove - at Bruceville & Elk Grove Blvd. and Florin & Calvine - in early 2008. Tesco owns one of the properties and holds a long term lease on the other. Neither location is ready to be opened anytime soon.

With 37 stores announced in early 2008, we've been asking if Tesco's window of opportunity for Fresh & Easy in Northern California going now on three years since the announcement is closing - or perhaps has already closed?

As you can see if you read the stories in our ongoing Northern California Market Special Report series (see the links at the end of this piece), Fresh & Easy's competition isn't waiting in terms of opening new stores - and in terms of new chains entering the market - for Tesco to launch. Far from it. There's been more new store and new chain activity thus far this year in Northern California than in any time in recent history. Hence the question for Tesco and its window of opportunity in the region for Fresh & Easy Neighborhood Market: wide open, closing - or closed

Tuesday, August 17, 2010: And Then There Were Five: Smart & Final Completes its Mission of Opening Five SmartCo Foods Stores in Metro Denver Before Summer Ends

Below are the linked stories thus far in our '2010 Northern California Market Special Report' series:

Additionally: Click here to read a selection of past stories on Tesco's Fresh & Easy Neighborhood Market and Northern California. Click the "older posts" link at the bottom of the linked pages for additional posts/pages.

Unfortunately, Fresh & Easy has prevented anything like this being built in my neighborhood, as they have leased the only shopping centers, and have let them sit empty for two years.