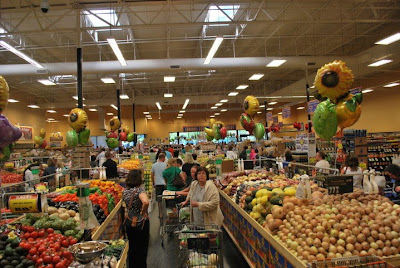 Just like at its cousins' - Sprouts' and Henry's - farmers market stores, Sunflower's stores have big produce departments, where they offer hot prices on both conventional and organic fruits and vegetables. The produce department pictured above is in the Greenville, Colorado Sunflower Farmers Market store, which opened on June 23, 2010. [Click on the photo to enlarge it.]

In late 2009 we sent out a tweet on our Twitter.com feed in which we reported Colorado and Arizona-based (it has headquarters functions in both states) Sunflower Farmers Market was headed to Northern California, just as its format cousins, Sprouts Farmers Market and Henry's Farmers Market were - and have done, both arriving with their forst stores this summer.

Sprouts so far has plans to open stores in the Easy Bay Area city of Dublin and in Roseville, which is near Sacramento. Both locations are set for early-to-spring 2011 openings. [See - September 22, 2010: Tesco's Fresh & Easy Neighborhood Market Planning A New, Third Store in San Jose, California.]

Like Sprouts, Henry's has two additional stores in the making - one in Roseville (just like Sprouts) and another in Walnut Creek, which is in the Easy Bay Area.

And speaking of Roseville, the now popular town for grocers with "Farmers Market" in their name, it's getting even more popular in that regard - it happens to be the city where Sunflower Farmers Market plans to open its first store in Northern California.

A 'Farmers Market' trifecta for Roseville

Sunflower plans to locate its Northern California flagship store, but far from only store in the region, in a vacant retail building in the Roseville Square shopping center near Douglas Boulevard and Interstate 80 in the city. The building's previous tenant was a Ross-Dress-for Less-store. The Sunflower Farmers Market store will be about 30,000 square-feet, with its selling space being slightly less than that after improvements and space used for a back room.

Sunflower Farmers Market, which is best described as a fresh produce and price-focused hybrid natural/organic and conventional grocery chain, has submitted renovation plans for the Roseville store to the city's planning commission. According to our sources, the grocer hopes to get quick approval and have the store ready to open by early next year, or in early spring at the latest.

As we've previously reported in the blog and on our twitter feed, Sunflower, like Sprouts and Henry's, has been looking for sites, with a focus on vacant buildings it can renovate such as those previously occupied by retailers like Circuit City, Ross and others, which there's an abundance of in Northern California.

As we reported in past stories, Sunflower Farmers Market, which was started in 2002 by former Wild Oats Markets founder and CEO Mike Gilliland, who is the primary owner and the CEO of Sunflower, raised $35 million for new store development and expansion in December 2009, a $30 million loan from Fifth Third Bank and a $5 million equity investment from Pacific Corporate Group (PCG). That money came on the heels of a $30 million equity investment made in 2007 by PCG.

In 2009 Gilliland told us he planned to open about 10 new stores each year for the next few years, in addition to launching into new regions. He also said plans call for Sunflower to have over 50 stores by 2013.

There are currently 30 Sunflower Farmers Market stores, located in Colorado (10), Arizona (7), Utah (2), New Mexico (6), Texas (3) and Las Vegas, Nevada (2). The Texas stores use the name Newflower due to a conflict with an existing independent natural foods store named Sunflower.

The grocer has yet to enter Southern California but it's looking for suitable locations in the region. On October 20, two new Sunflower stores are opening in Colorado, in the cities of Lafayette and Thorton. A third new store, in Longmont, Colorado, is set to open before the end of the year and a new store in Cottonwood, Utah is scheduled to open in early 2011.

Sunflower's addition to Northern California adds yet another aggressive player to what we've been saying is rapidly becoming one of the most competitive food and grocery retailing regions in the U.S.

Stay tuned. We'll have much more to report on Sunflower Farmers Market and Northern California soon.

I’ve been thinking a lot about this myself, as I would like to develop a sustainable distribution system for local food. I really like what Greenling are doing in Austin. Couldn’t this be a successful model?