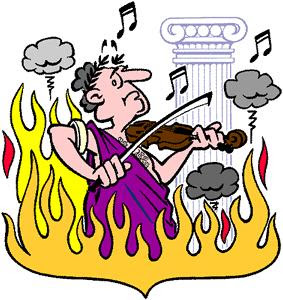 I've been casting about in search of a good historical metaphor or legend in which to frame Tesco's multi-year postponement of the opening of its 37 confirmed - and numerous unconfirmed - Fresh & Easy Neighborhood Market fresh food and grocery stores in Northern California, along with it's neglect in announcing when it plans to start opening some of the stores - even if that date ends up being in late 2011 or early 2012.

My search has ended.

Historical legend (I call it legend because the facts of what actually happened remain in dispute among historians) has it that in 64 AD, as Rome burned to the ground - either by arson or accident - Nero - the emperor at the time who many blame for having the fire set - and who blamed the Christians for it and had them severely punished - relaxed in the confines of his comfortable residence and played the fiddle.

Whether or not its true Nero actually played the fiddle while Rome burned - for example, many historians say it wasn't a fiddle since the particular stringed instrument had yet to be invented at the time, and Cassius Dio said Nero didn't play the fiddle at all but instead sang the "Sack of Ilium" in stage costume as the city burned - the legend none the less created a saying - "Fiddling while Rome burns" - that exists to this day as a reference, roughly defined as meaning when a person, organization, institution or business takes its eyes off the ball and "fiddles" around while others do the opposite.

In terms of Tesco and the Northern California market, I see it this way: While Fresh & Easy Neighborhood Market's numerous competitors in California, Nevada and Arizona - along with other grocers - continue to move forward opening new stores and planning to open new stores - including in the case of Arizona-based Sprouts Farmers Market and Southern California-based Smart & Final-owned Henry's Farmers Market both opening their first stores in Northern California this year, having only announced their respective intentions to do so in early 2010 - Tesco continues to play the Fresh & Easy fiddle when it comes to the northern part of California.

In other words, if 'The Insider' was producing a food and grocery retailing-themed play based on a historical legend - Rome and Nero in this case - and centered in the Northern California market - I would cast many of its competitors, plus some other grocers, as Rome (burning white hot in Northern California), and Tesco's Fresh & Easy as the modern day Nero.

To demonstrate my point, since April of this year Fresh & Easy Buzz has been running its "2010 Northern California Market Special Report Series," in which the blog is reporting and writing about what various competitors of Tesco's Fresh & Easy Neighborhood Market are doing in Northern California, as well as analyzing the market overall and in relation to Tesco's eventual launch of its Fresh & Easy stores in the region.

Linked Below (in italics) are the stories in the series published thus far (and it's only July). Call it Exhibit A of my "Rome and Nero" analogy.

If you read the stories linked below, you will see how, despite, and in some cases because of, the economic recession - which Tesco continues to say when pressed is why it hasn't opened any Fresh & Easy stores in the region - grocers of all shapes, sizes and formats are doing just the opposite: They're opening new stores, proposing new stores, remodeling existing stores, and in the case of Sprouts and Henry's entering the Northern California market for the first time. [See a summary of some of that activity here, for example.]

>July 14, 2010: Tony Bennett Has Nothing on Whole Foods Market When it Comes to Loving San Francisco...That City By the Bay

>May 8, 2010: Sprouts, and Likely Henry's to Beat Fresh & Easy to Northern California Despite it's Big Head Start

My point in using the "Rome and Nero" analogy, and in linking the stories in Fresh & Easy Buzz's Northern California series thus far, is to offer a couple observations.

The first observation and argument being that the clock is ticking on Tesco in terms of announcing what it plans to do - and when - in Northern California.

For example, members of the Willow Glen Neighborhood Association in San Jose, where one of the 18 confirmed San Francisco Bay Area future Fresh & Easy store sites is located, told Fresh & Easy Buzz on Twitter a couple weeks ago that they've "given up" on Tesco ever opening the Fresh & Easy store at Bird and Minnesota in the neighborhood.

The Fresh & Easy store in the neighborhood was announced going on three years ago, along with the other 17 in the Bay Area. Recently a contractor painted the vacant Albertsons store building at Bird and Minnesota a pale beige. Nearly two years ago some work was started by Tesco on the building, including installing a white roof. Since then, however, no remodeling work has been done to the building - until the beige paint job earlier this year, that is. The building previously had "Fresh & Easy green" painted on it.

The city's mayor, Jim Vreeland, also lives in the Pedro Point neighborhood, and was instrumental in getting Tesco to locate a Fresh & Easy store at the location. He's been frustrated over the lack of information from Tesco because, when asked when the Fresh & Easy store will open, he has no answer to offer. Interestingly though, a number of neighborhood residents told me recently that they've given up so much on the Pedro Point Fresh & Easy store's ever opening, that the mayor these days gets few questions about it when he's out making his rounds. Not a ringing endorsement for Tesco's communication with the Mayor of Pacifica though.

There are numerous other examples just like the two above. But they serve to make my point, which is that Tesco's window of opportunity is pretty close to closing in terms of it's being time now for the grocer to announce when it plans to open its first stores in Northern California - or if not, what it plans to do in the market in general.

San Francisco City Supervisor Eric Mar agrees with 'The Insider' on this matter. For example, at a recent neighborhood meeting in San Francisco's Richmond District, Mar told the residents he represents that, based on conversations he's recently had with Fresh & Easy Neighborhood Market executives, he thinks some sort of announcement is coming soon. if not, he - and the San Franciscans he represents - are going to be more unhappy than they already are. [Read - June 26, 2010: Tesco Planning to Announce in July When First Northern California Fresh & Easy Neighborhood Market Stores to Open] Again, this translates to a lack of goodwill for Fresh & Easy.

But it's mid-2010 now - not early 2009. And the clock has been ticking for well over a year since then. In fact, the alarm on the clock went off at the end of 2009, in my analysis and opinion. The alarm being the signal that Tesco should have announced something about Northern California in early 2010. There's even some evidence that suggest to me - remember Tesco is Nero and its competitors are Rome in terms of Northern California - that the clock has stopped.

If no announcement by Tesco regarding Fresh & Easy Neighborhood Market and Northern California is made by the end of July, it's my view that it could be near-impossible to reset that clock. Rome (Fresh & Easy's competitors) is burning white hot - and grocery shoppers in Northern California aren't the sort to wait until the fiddle-player decides to perform before they choose up sides and declare loyalties.

Recent columns by 'The Insider':

Rumor has it that one brassy, bold, jolting Johnnell Gregory has been hired as DM for Northern CA. She was manager of the Southern CA Fallbrook store for 1-1/2 years. This is the same manager who told her KT people to serve "damaged and/or expired food" to customers to keep her waste dollars down and "just throw the load" to CA's without rotating because the load had to be done in less than normal time. "Big bosses coming in, work faster so I look good." Wonder what she has up her sleeve for upgraded position of DM. Time will tell---watch the clapple.

Would you please send us an e-mail at freshneasybuzz@yahoo.com so that we can send you a return mail. We have a photograph regarding your comment that we would like you to see and give us a comment on via e-mail. All 100%confidential. Thanks!