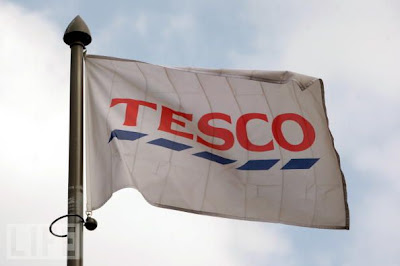 The 35% (constant exchange rate) sales increase at Fresh & Easy USA, which Tesco attributed primarily to added sales from the Thanksgiving holiday, was the highest of all the global retailer's group operations, which include the United Kingdom (UK), Europe and Asia, along with the U.S.

Tesco also said today third quarter same-store-sales (called like-for-like in the UK) for Fresh & Easy Neighborhood Market grew at a 9.8% rate, which is a positive sign for its struggling U.S. fresh food and grocery chain, which Tesco says will hit break-even by the end of its 2012/13 fiscal year.

Same-store-sales is a key metric for food and grocery retailers because it measures sales growth for stores opened at least one year, thereby factoring out sales due primarily to rapid expansion.

It's a particularly important metric for evaluating Tesco's Fresh & Easy because of its fairly rapid new store opening schedule.

Overall, Tesco reported a third quarter group (all global operations) sales increase of 8.8% (6.8 % at constant rates) in the 13 weeks through November 27.

Same-store-sales in Asia were up 4.3%, Europe had a 3.1% gain and U.K. sales, where Tesco derives 70% of its profits, rose 1.6% for the third quarter, compared to the previous period last fiscal year.

While Fresh & Easy's same-store-sales numbers look to be promising for Tesco, there's more to it than meets the eye - and all is not what it appears to be. We'll have an analysis piece pointing out some of those factors - many of which we've detailed previously in Fresh & Easy Buzz - before the end of the year.

>Click here for an additional selection of related stories
Posted by Fresh & Easy Buzz at 9:04 PM

Seeing as we know Tesco's overall revenues and profits, as well as the respective sizes of the markets (we know that UK is 70%, for example), and we know what the overall growth was, as well the growth of individual markets, it must be possible to calculate (if only roughly) the approximate size and revenue growth of F&E in terms of actual pounds.

Thanks for your comment. But are you asking a question? If so, what is it specifically you are asking?

Whoops, my bad. I was just pondering whether or not it would be possible to calculat Fresh and Easy revenues, etc from the numbers they have given.

I was under the impression that Tesco kept them all under wraps, it's just hit me that I'm confusing Tesco/F&E with Wal*Mart/ASDA (they don't report ASDA figures)

If you look on the story under the title "Recent Related Stories," and click on the story link, "October 5 2010: Philip Clarke's Early Welcome to America: Tesco Logs $151 Million Half-Year Loss For Fresh & Easy Neighborhood Market," it contains the most recent sales and earnings information reported by Tesco for Fresh & Easy.

We will be publishing an analysis piece before the end of the year, in which we will take a close look at Tesco's near-double digit third quarter same-store-sales increase for Fresh & Easy.

There are numerous factors involved in the increase, which we will examine. Not all are positive. Stay tuned.