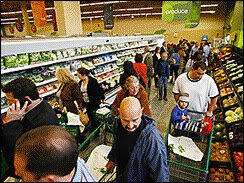 We've selected a few linked articles (see Fresh & Easy Bibliography below) that provide a good background on Tesco's Fresh & Easy Neighborhood Market for you, our readers.

We chose the articles linked below because they will provide you with a good overview of the Fresh & Easy venture, store format, operations, marketing plans and other issues. Not only will reading them qualify you to pass Fresh & Easy 101, but you will be on your way to completing Fresh & Easy 102 (advanced) as well. Happy reading! 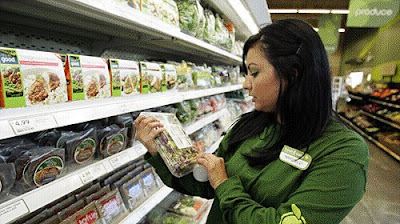 A clerk checks the perishable code dates on a package of products in the prepared foods section of the Fresh & Easy grocery market in Los Angeles. As you can see in the photo, the stores' merchandise a huge selection of prepared and refrigerated ready-to-eat, ready-to-heat and grab-and-go foods. (photo: Courtesy LA Times.)

Email ThisBlogThis!Share to TwitterShare to FacebookShare to Pinterest
Labels: Fresh and Easy bibliography

The blogger, who has shopped in the stores, responds to an article titled "Fresh & Bumpy," and offers its own written "two-cents" about the piece, as well as the blogger's own analysis of the stores and Fresh & Easy's private label products.

The food and grocery industry blog Natural~Specialty Foods Memo has been writing a lot about Tesco's Fresh & Easy Neighborhood Market.

The blog recently reported, and wrote about the grocer's plans to move into Northern California next year.

Additionally, they have a number of pieces about Fresh & Easy and other small format stores, including deep-discounter ALDI, the Giant Eagle Express stores, Whole Foods' Market, Inc.'s new Whole Foods Express prototype store and others.

The blog also has numerous stories about Wal-Mart's research and development efforts into a small format grocery market of their own. Natural~Specialty Foods Memo calls the format "Small Marts."

Further, the publication has a recent article about two small format natural foods stores--Sunflower Market, which is owned by supermarket industry giant Supervalu, and Sunflower Farmers Market, a fast-growing natural foods chain started by the former founder of Wild Oats Markets and based in Boulder, Colorado.

Both Sunflower Market and Colorado-based Sunflower Farmers Market plan on building numerous new stores in the next five years, posing a potential challenge to Whole Foods' dominance of the natural and organic products retail category, according to the blog.

Natural~Specialty Foods Memo calls these small format natural foods stores "Natural Born Category Killers." It calls them this because the small format natural and organic products stores are no frills in style, carry a smaller selection of products than Whole Foods--and put a major emphasis on low prices, which is the chains' key positioning element in the category.

The blog's address is: www.naturalspecialtyfoodsmemo.blogspot.com

You can also find the Fresh & Easy and small format stories by looking at August through December in the blog archives.
Posted by Fresh & Easy Buzz at 7:41 PM No comments: 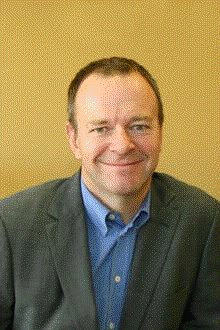 You can read a brief synopsis of Mason's (pictured above) remarks here. Also, you can watch a video of Mason and the CNBC panel here.
Tesco currently has 27 Fresh & Easy Neighborhood Market stores in Southern California, Arizona and Nevada. The stores are a hybrid discount, convenience-oriented grocery store and fresh, prepared foods retailer.
Fresh & Easy grocery markets average 10,000 to 13,000 square feet. The store's offer a selection of Fresh & Easy brand private label and national brand basic groceries, along with an extensive selection of fresh, prepared foods. The stores also offer fresh produce, fresh meats, wines and craft beers, and a selection of natural, organic and specialty groceries.

Taking a page from its parent company's Tesco branded stores in the United Kingdom (U.K.), Tesco's Fresh & Easy Neighborhood Markets in the USA is placing drop boxes in its 27 stores in Southern California, Arizona and Nevada, where customers can put gift cards for recycling.

The proceeds from the sale of the gift cards will be donated by Tesco's Fresh & Easy to American Forests, a non-profit organization that plants trees in restoration areas throughout the United States. for every dollar donated, American Forests will plant one tree, the group says.

Tesco's Fresh & Easy Neighborhood Market has said a key aspect of its positioning as a food retailer in the U.S. is to be a "green" or environmental grocer. The gift card recycling program is just one of the many similar programs the retailer says it will do on a regular basis under its "green grocer" commitment.

Tesco's supermarkets and other format retail stores in the U.K. also are recycling gift cards and donating the proceeds from the sale of the cards to non-profit organizations.

One question: We didn't see anything on Fresh & Easy's news release about the grocer making a matching donation of any kind to American Forests? We're checking on that with the retailer--and will get back to you with their answer. Of course, if you know--let us know.
Posted by Fresh & Easy Buzz at 4:54 PM No comments:

What is Fresh & Easy Buzz? 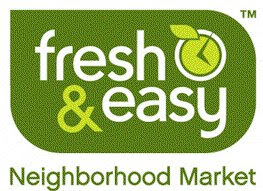 Fresh & Easy Buzz is a publication dedicated to reporting on, writing about and analyzing all that is Tesco's Fresh & Easy Neighborhood Markets.

British-based, international retailer Tesco plc. launched its Fresh & Easy Neighborhood Markets stores in the Western U.S. in November, 2007. To date, their are about 30 stores open in Southern California, Arizona and the Las Vegas, Nevada metropolitan region. Plans call for 200 Fresh & Easy stores by the end of 2008. Beginning in 2008, Tesco also will be branching out to Northern California with Fresh & Easy stores. The retailer also is looking at putting stores in New York, Florida and Chicago.

In addition to offering news stories and other pieces written by the international business press and grocery industry trade publications on the blog, we will be reporting and writing original news, features and analysis on Tesco's Fresh & Easy Neighborhood Markets. The blog is all Fresh & Easy, all the time.

We'll cover all the BUZZ about Fresh & Easy, from hard news to gossip. We invite Fresh & Easy Neighborhood Market employees, customers and others interested to email us at: freshneasybuzz@yahoo.com with any information, news, ideas or thoughts you have on and about Fresh & Easy.

We especially want employees to write us about your experiences working for the grocer and at the stores. You need not give us your name. And we will protect your confidentiality 100 percent. We also encourage shoppers to write us about their experiences and offer their opinions about the stores. If you ask, we also will not publish your name. It's up to you. Use our "comments" feature as well to comment on any story you read, or to just offer your opinions regarding anything Fresh & Easy.

Fresh & Easy stores are small format (average 10,000 to 13,000 square feet) grocery markets, designed to provide convenient service to shoppers. Think of the stores as sort of a cross between a small, neighborhood food store with low prices for basic grocery items, and a Trader Joe's.

Fresh & Easy stores sell a selection of private label and national branded basic grocery products. The stores that have thus far opened are offering these basic grocery items at retail prices far below convenience stores, and even lower than most supermarkets. The prices at present are comparable to discount or warehouse style grocery stores.

The format is a hybrid of Tesco's Express grocery markets in the United Kingdom (U.K), which are part convenience store and part upscale food store. The Fresh & Easy format stores offer a larger selection of prepared foods than do the Tesco Express stores in the U.K. Other than that, and a couple of other differences, the formats are very similar. Tesco's Express format has been very successful in the U.K and in other parts of Europe where the stores are located.

Tesco plans to spend billions of dollars on its Fresh & Easy Neighborhood Markets venture in the USA. No foreign food retailer has ever launched such a massive retail venture in the U.S. Some sources say Tesco's plans are to have 500 Fresh & Easy stores in the USA in five years, with estimated sales of $6 billion.

The Fresh & Easy format also is totally experimental in terms of large-scale, national food retailing in the U.S. Its a combination basic, low price-focused, limited assortment grocery store on the one hand, and a semi-upscale, fresh and prepared foods store on the other. Additionally, the stores' are attempting to be what they are in a retail selling space of about 10,000 square feet.

Tesco's Fresh & Easy is by no means the first small format food store in the U.S.--nor is it currently the only one. Small format mom and pop grocery stores, neighborhood supermarkets, convenience stores and small-size, independent natural foods stores have existed in the USA for decades, even centuries in the case of the mom and pop food stores.

Further, large supermarket retailers like ALDI, which owns Trader Joe's and also has almost 900 ALDI small format discount stores in the U.S. have been around for years. However, Fresh & Easy's combination of a low-priced basic grocery store, and fresh, prepared foods retailer (it's hybrid format nature), it's small store size, and its scope in terms of the number of stores Tesco is building in such a short period of time, all make it revolutionary in U.S. food retailing history.

Welcome to Fresh & Easy Buzz: Join Us:
We plan on covering all the BUZZ on Fresh & Easy: hard news, original reporting, what others in the press are saying, gossip--and more.
We also want to be an interactive blog. We welcome comments from the blog's readers. We also ask for your input. Fresh & Easy employees, customers, supermarket industry employees and experts; we ask you to email us with any Fresh & Easy news, comments, opinions, tips and the like. It's only by harnessing the million-fold power of the web that we can bring our readers the BEST OF THE BUZZ about Tesco's Fresh & Easy Neighborhood Markets.

Our email address is: freshneasybuzz@yahoo.com

The Publishers
Posted by Fresh & Easy Buzz at 3:27 PM No comments: