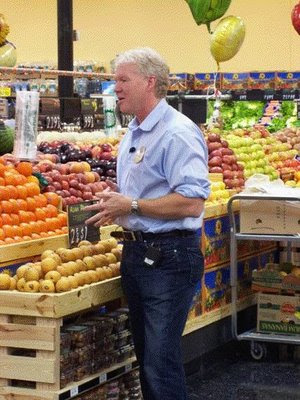 Sunflower Farmers Market founder and CEO Mike Gilliland works produce in the produce department at one of his 32 stores. The Sunflower stores offer natural and organic (and some conventional) food, grocery and non-foods products in all categories and at discount prices. A key focus of the format is fresh produce. The farmers market-style produce departments comprise about one-third of total store square-footage. Sunflower Farmers Market stores average 20,000-30,000 square-feet.

Today the Colorado-based grocery chain went official, announcing its plans to open that first Sunflower Farmers Market store in Roseville, at 424 Roseville Square, on April 13, 2011. The announcement came in the form of a press release issued today by the grocer's public relations firm and devoted specifically to the opening of the Roseville store.

As we noted in our piece on Tuesday, [Sunflower Farmers Market Confirms Our Report It's Headed to Northern California; Roseville Store to Open April 2011], Sunflower Farmers Market also plans to open a second store in Northern California, in the South Bay Area city of San Jose, not long after it opens the flagship unit on April 13, 2011, at Douglas and Harding Boulevards in the Roseville Square Shopping Center, in Roseville, which is near Sacramento.

Sunflower didn't mention plans for a store in San Jose in today's announcement release. However, the retailer plans on opening the unit in the city, based on information we have from multiple sources.

Historic interest part one: The beginning

While running Wild Oats, Gilliland bought the then Southern California-based Henry's Farmers Market chain from its owners, members of the Boney family, which just happens to be the same family (next generation) that founded Sprouts Farmers Market in Arizona in 2002.

Historic Interest part duex: All in the family

Towards the end of his tenure at Wild Oats, Gilliland wanted the chain to focus more on the Henry's format (price/value focus) rather than its Wild Oats flagship format (conventional-to-upscale natural/organic format), which was similar to and the chief competitor of Whole Foods Market, which was eating Wild Oats' lunch in the 2000's. The reason: Gilliland didn't think two chains going after the same high income natural/organic products consumer could make it. Whole Foods and Wild Oats were at the time (about mid-1990's-2007) the only two chains in what was then called the "supernatural" food retailing segment. That term went away when Whole Foods acquired Wild Oats, in 2007. After all, you can't have a retailing category with only one retailer comprising it.

Mike Gilliland lost that battle at Wild Oats Markets, which was struggling at the time and continued to struggle after he left in 2001. That struggle led to the buyout by Whole Foods Market, Inc. in 2007.

At the time and since then he has said on a number of occasions he believed Wild Oats would have done better by focusing on Henry's Farmers Market because it could have used the format to go after the second-tier consumer; those shoppers with more moderate incomes who still want to be able to buy natural and organic foods and related products. Call it the alternative to Whole Foods Market for shorthand.

Gilliland lost the battle at Wild Oats but won the war - he started Sunflower Farmers Market, which targets the very same demographic and market segment he wanted the board of Wild Oats Markets to do using Henry's Farmers Market as the chain's focus format over a decade ago.

Since 2002, Gilliland and his team have opened 32 Sunflower Farmers Market stores, which they like to refer to as the pioneer grocer in the emerging value segment of the natural and organic foods retailing industry, in six western and southwestern states - Colorado, Arizona, New Mexico, Nevada, Utah and Texas. California - Northern California first - will be number seven.

Based on our estimates, annual sales for Sunflower Farmers Market is in the $600-$700 million range.

Additionally, Gilliland recently said same-store-sales growth for the most recent-ended year were just under double-digits (percentage), adding that in the two previous years they were in the double-digits. Sunflower is privately-held and therefore isn't required by law to make sales and profit figures public. Same-store-sales are a key metric in the food retailing industry because they measure sales at stores opened at least one year. Therefore, the near-double-digit and double-digit growth percentages Gilliland reported are excellent growth percentages for the chain.

Back to the future: Even in its heyday, when it was performing very well, Wild Oats Markets Inc., under Gilliland's leadership, was never able to succeed in Northern California, where they opened a number of stores, primarily acquiring markets from independent natural foods retailers in the San Francisco Bay Area, but eventually closed them all, ultimately pulling out of the market completely. The Northern California stores were the Wild Oats conventional natural and organic foods store format, not Henry's Farmers Market.

But this time around - different decade, different format - Gilliland and company will enter Northern California with a format - Sunflower Farmers Market - he feels confident will succeed, compared to the Wild Oats stores (although he felt confident they would do the same back in the day) of a couple decades ago. If not, he wouldn't be doing so. Nor would he have plans to open numerous stores in the Northern California region, following the model Sunflower Farmers Market is carrying out in markets in the other western and southwest states, where it's growing rapidly.

Our analysis is similar - but qualified: We think the Sunflower Farmers Market stores (and format) have strong potential to succeed in selected parts of and cities in Northern California. We'll offer some details on that topic in a future piece.

[Editor's Note: We began our 'Northern California Market Region Special Report' series in April of this year. It's one in a number of special report series' we've done in Fresh & Easy Buzz over the last three years. Taken as a whole, we beleive the nine months' of stories offers one of the best up-to-date snap shots of the Northern California market region, which Tesco's Fresh & Easy Neighborhood Market plans to enter in early 2011, that's currently available. Below are the stories in the series thus far. Click on the title to read the story.]

[Also: click here , here and here for a selection of past stories on Fresh & Easy and Northern Calfornia.]
Posted by Fresh & Easy Buzz at 5:54 PM