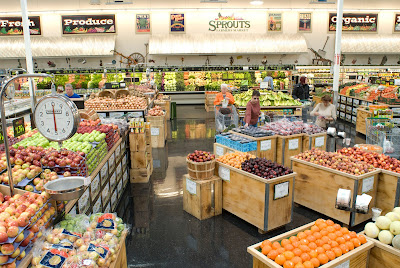 Large farmers market-style produce departments are a key feature of the Sprouts Farmers Market format. The stores also offer a full-selection of natural and organic groceries and a limited assortment of conventional brands, along with fresh meats, perishables, deli and fresh-prepared foods, non-foods, bulk foods, and vitamin-nutritional supplements departments. The produce departments, which offer about 500 items in the summer and about 350 in winter, on average contribute about 20%-25% of overall store sales (Suggestion: Double-click on the photograph to enlarge so you can see the full extent of the produce department.)

Arizona-based grocery chain Sprouts Farmers Market opened its first store in Northern California on Wednesday, June 2 at 111 E. El Camino Real in the south Bay Area city of Sunnyvale, which is in the heart of the famed Silicon Valley, and not far from San Jose.

In addition to being family-owned Sprouts' first store in Northern California, the Sunnyvale market is the chain's 50th store. Along with the new store there currently are 13 Sprouts Farmers market locations in Southern California and 36 more units located in Arizona, Colorado and Texas.

Sprouts Farmers Market was founded in 2002 by members of the Boney family, who are also the founders of the Henry's Farmers Market chain, which today is owned by Southern California-based Smart & Final. Henry's was named after family patriarch Henry Boney.

The 30,865 square-foot Sunnyvale store is in an old Circuit City store building, which Sprouts renovated from stem-to-stern.

Read our May 8, 2010 story: Sprouts, and Likely Henry's to Beat Fresh & Easy to Northern California Despite it's Big Head Start.

The June 2 grand opening found at least 200 shoppers waiting in line at 7 a.m, about an hour before the store manager turned the key in the lock and opened the Sunnyvale store's doors. But the wait wasn't all that bad for the grand opening day customers: Sprout's staff treated the group to a free breakfast of muffins, along with providing coffee, orange juice, milk and bottled water, while they waited in line.

Among the numerous grand opening day events on June 2 at the first Northern California Sprouts Farmers Market store were:

>The One Big 5-day sale: Numerous grocery items were sold for $1, $2 and $5; about half off the regular prices.
>All customers purchases were bagged in free, reusable Sprouts Farmers Market grocery bags.
>The store held raffles for free grocery carts full of food and groceries throughout the day.

The store, which hired about 100 workers, also offered scores of hot grand opening specials, ranging from a dozen organic, cage-free eggs for $1.99 and 64 ounce bottles of apple juice for $1.00, to avocados for 49 cents each. Sprouts also sent out an advertising circular prior to the store opening in which it offered these and a number of other items for free with a coupon.

And today, the store is holding what its calling a "cheesy event": From 9 a.m. -to- 5 p.m. Sarah "The Cheese Lady" Kaufmann will carve a "50 store" theme into a 300 pound wheel of chipotle cheddar cheese to celebrate the Sunnyvale store being Sprouts' 50th market.

In introducing the grocer to Sunnyvale residents, president and coo Doug Sanders said: "Sprouts, with its playful setting and high quality fresh foods, is a great addition to the fun, active community that has been dubbed the "happiest place in America." We are thrilled to open this landmark market - our 50th and first in Northern California - in the city of Sunnyvale and provide local residents with high quality, affordable foods. We welcome new friends from all over the area to come out and enjoy our low prices on great-tasting healthy and natural foods... a perfect fit for this progressive community."

As part of its entry into Northern California and the Bay Area, Sprouts, which puts a big focus on locally-grown and produced fresh produce and other foods in its stores, has created a partnership with Full Circle Farm, an 11-acre sustainable farm located just three miles from the Sunnyvale Sprouts Farmers Market store. Sprouts' president Sanders says the grocer will be helping to raise funds for the non-profit farm, and will help it to develop agricultural-based curricular programs targeted toward middle-school students in Sunnyvale and Silicon Valley. The farm also will sell some produce to the store.

To kick off the partnership, Sprouts presented Full Circle Farm with a $2,000 check to help fund a new irrigation project. "We are very pleased to initiate a partnership with Sprouts Farmers Market, and their generous donation will launch a much-needed irrigation system for Full Circle's historic 300-tree fruit orchard," says Rebecca Jepsen, the farm's executive director. This orchard is one of the first to be put back into the Valley of the Heart’s Delight in more than 75 years and provides education on how to live a healthier, more sustainable life."

The south Bay Area region, now famous as the high tech capital of the world and called Silicon Valley for shorthand, was not all that many years ago equally famous for being one of the most productive fruit-growing and packing house regions in the world. For example, it's no accident Apple Computer, which is located next door to Sunnyvale in Cupertino, named many of the streets on its corporate campus using fruit-growing themes. An example is Mariani Avenue, which is named after one of the region's pioneering fruit-growing and packing families. The Mariani fruit brand remains popular today.

Full Circle Farm is a two-year-old non-profit, community-based neighborhood farm located on property owned by the Santa Clara Unified School District right in the heart of Sunnyvale. It's mission is to help promote sustainable agriculture and enable people, especially kids, to reconnect with the natural world, according to executive director Jepsen. They use the farm to put students in charge of the work, responsibility and rewards of growing, harvesting, preparing and eating locally grown foods. Full Circle Farm also oversees Sunnyvale’s one-acre community-based Charles Street Gardens, and hopes to serve as a model for other urban agricultural projects around the country, says Jepsen.

"Sprouts leadership has been looking for ways to fulfill its 'healthy living' mission beyond just the stores, and hopes to work together with Full Circle Farm to develop food and nutrition-based educational materials, as well as more programs to promote and sell locally grown produce," says Sprouts Farmers Market president Sanders.

"This is a golden opportunity for Sprouts to support the very kind of mission our company was created to promote," Sanders says. "Anyone who has ever grown their own food knows what it feels like to get reconnected to the soil. It's important to understand where our food comes from, and to convey that learning and the life lessons that go with it to the young people of Sunnyvale."

As we noted in our May 8 piece, Sprouts Farmers Market is in the process of setting up a regional produce facility in Northern California. This is to allow the grocer to source locally-grown produce (and there's an abundance of it within a less than 200 mile radius of the San Francisco Bay Area) for its Sunnyvale store and the other units it plans to open in the region.

And Sprouts indeed plans many more stores in Northern California, with an initial focus on the San Francisco Bay Area. For example, our commercial real estate sources in the region tell us Sprouts is looking all over the nine-county Bay Area, which has a population of nearly 7 million, for store locations. The grocer also is looking at numerous other vacant Circuit City stores which, like the Sunnyvale store, it can renovate. There a many such vacant stores available in the Bay Area as a result of Circuit City going out of business last year.

The grocer says it plans to double its store count from 50 to 100 by the end of 2013. A significant number of those new stores will be in Northern California, along with in its existing Southern California, Arizona, Colorado and Texas markets, and perhaps an additional new market or two in the Western U.S. Sprouts, which started with one store and 43 employees in Arizona in 2002, currently employees nearly 4,000 workers.