Today we thought we would give Fresh & Easy Buzz readers an additional pictorial look at some of the new items not pictured in the story on Saturday. 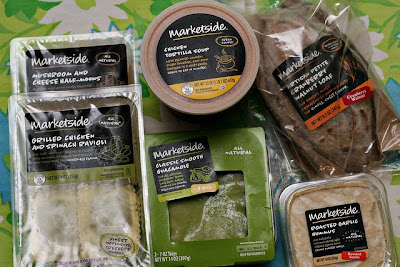 Pictured above, the items are, from left to right:

>"Marketside Mushroom And Cheese Half-Moons and Grilled Chicken and Spinach Ravioli. The varieties are two of the numerous SKUs (and shapes) in the new"Marketside" brand refrigerated fresh pasta line, which we wrote about in the in the Saturday piece. [See - December 18, 2010: Walmart Launches New 'Marketside' Fresh Food Lines - Plus A 'Fresh' Campaign to Create Brand Buzz

>"Marketside" Roasted Garlic Hummus. The variety is one flacor in the multi-SKU new line of "Marketside" packaged, fresh-refrigerated Hummus.

As we noted in the story on Saturday, Walmart Stores, Inc. is developing additional new "Marketside" private brand fresh food lines, and preparing to introduce some of those new lines, along with numerous new item line extensions, in the first half of 2011.

[Private Brand Showcase is a regular feature of Fresh & Easy Buzz. In it we report on, write about and offer analysis and commentary on the fast-growing private or retailer brand (sometimes called private label) movement, along with featuring various private brand products being offered by Tesco's Fresh & Easy Neighborhood Market, along with those of other grocers and retailers operating various types of formats. Below is a selection of 2010 stories in our Private Brand Showcase]