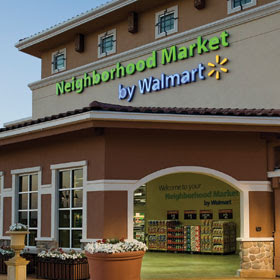 Walmart Stores, Inc. is currently searching for numerous future store sites in Northern California, with a focus on existing vacant retail buildings, for its 20,000 square-foot Neighborhood Market by Walmart prototype format, which it's been testing in a store in Rogers, Arkansas near corporate headquarters in Bentonville for about a year, Fresh & Easy Buzz has learned.

In addition to its Northern California focus, Walmart is also scouting for sites for the smaller-format stores in northern Nevada, in other selected urban regions in the west, and at urban locations on the east coast and in the Midwest, particularly in Chicago, where it recently announced a major development initiative in partnership with the city and Mayor Richard Daley, in which Walmart will invest tens millions of dollars to develop numerous stores (multiple format, big and small) on Chicago's south and west sides.

Walmart is searching for an initial 10 locations for the new concept, 20,000 square-foot Neighborhood Market by Walmart prototype format in the Sacramento Metropolitan region, and for about the same number of store sites in the San Francisco Bay Area, according to two Northern California-based commercial real estate sources in a position to know about the search.

According to our sources, Walmart is looking for at least three initial locations in Sacramento, with the other seven store sites being in the surrounding suburbs, including in Elk Grove, where Tesco's Fresh & Easy Neighborhood Market has two future store sites - one at Bruceville Road and El Grove Boulevard, and the other at Elk Grove Florin Road and Calvine Road. This mix is subject to adjustment and change.

Tesco's Fresh & Easy has had 19 publicly confirmed store locations in Northern California's Sacramento/Vacaville Metropolitan region since February 2008. Ten of the store sites are in Sacramento. The other seven are in the suburbs. Two of the stores are in Vacaville, which is about a 30 minute drive from Sacramento, and is located about mid-way between Sacramento and the Bay Area. [See - February 28, 2008: News & Analysis: Tesco's Fresh & Easy Confirms 19 Store Locations for the Sacramento-Vacaville Region in Northern California]

The search for store locations for the 20,000 square-foot prototype format, currently going by the name Neighborhood Market by Walmart, in the San Francisco Bay Area includes a mix of urban and suburban locations, including in the south Bay Area near San Jose, in the East Bay, as well as in San Francisco, and elsewhere in the nine-county region of about 7 million residents.

Tesco's Fresh & Easy has 18 confirmed future store locations in the San Francisco Bay Area. Those store sites were announced in February 2008 as well. Click here to read our most recent - and past - coverage on Fresh & Easy Neighborhood Market's plans in Northern California, including in the nine-county Bay Area.

Walmart is hoping to find some of the Northern California locations this year, and could announce, or at least confirm, its plans for the 20,000 square-foot stores before the year is out.

Fresh & Easy Buzz has visited the 20,000 square-foot new concept Neighborhood Market by Walmart store in Rogers, Arkansas. It differs from the traditional 40,000 square-foot Neighborhood Market format (about 152 existing stores at present) in a number of key ways, although its apparent to us it's where the inspiration and structural basis for the prototype comes from.

First, the 20,000 square-foot prototype store is more compact, but doesn't have a crowded look or feel to it. Second, the store's sight lines (lower but with fairly high-profile gondola shelving in order to hold plenty of SKUs) and overall interior design are an improvement over the traditional Neighborhood Market stores, in our analysis.

Additionally, the department graphics - green in color - in the 20,000 square-foot prototype store are colorful and pop when you set your eyes on them. The theme "Save Money Live Better," is used throughout the store.

Lastly, the 20,000 square-foot prototype Neighborhood Market by Walmart store in Rogers, Arkansas has a service seafood counter, a deli/prepared foods department under the "Marketside" brand, am in-store cafe, and features a substantial offering of natural and organic food and non-food products, in addition to conventional national brands, and lots of private label SKUs, across all departments and categories.

We've been reporting and offering analysis for the nearly three-year existence of Fresh & Easy Buzz that in order for Walmart to have a significant presence in the food and grocery retailing space in Northern California it must have a multi-format and multi-square-foot strategy.

The retailer initially began exploring this strategy in late 2007/early 2008, when it located a number of potential sites in Northern California for its small-format (16,000 -to- 20,000 square-foot) Marketside by Walmart fresh food and grocery stores (originally named just Marketside). However, in 2009 Walmart put the opening of any new Marketside stores on hold, and began creating the 20,000 square-foot Neighborhood Market by Walmart prototype, the first and only store of its size currently being the one in Rogers, Arkansas.

There are currently four Marketside by Walmart stores in Metro Phoenix, Arizona. All four stores opened in early October 2008.

Walmart Stores, Inc. currently has no plans to open any additional Marketside by Walmart stores - anywhere - including in Northern California. In fact, the retailer still holds leases on two sites in Southern California, one in San Diego and another in nearby Oceanside, but has no plans to open them as Marketside by Walmart stores. Construction at both locations, vacant retail buildings, has never been started, nor are there any plans to do so in the near future.

It's our analysis that Walmart is likely to replace the Marketside by Walmart format with some final version of the 20,000 square-foot Neighborhood Market by Walmart prototype, in terms of not opening any additional Marketside stores, and eventually close the four stores in Arizona, or replace one or more with the 20,000 square-foot prototype. It's important to note that the 20,000 square-foot prototype store in Rogers, Arkansas remains a work in progress in terms of not being cast in stone as the final format product, just like the name Neighborhood Market by Walmart might not end up being what it's called. [For some background see - December 21, 2009: Wither Walmart's Small-Format 'marketside' Stores and Format? and January 9, 2010: Walmart's 'marketside': What's 'In-Store' for 2010?]

As we've reported and offered analysis on frequently in Fresh & Easy Buzz, Walmart has embarked on a strategy to increase its market share, which is minimal, in Northern California in three key ways.

First, it's converting as many of its Division I discount format stores - just as its doing throughout the U.S. - as it can in the region into hybrid supercenters, adding anywhere from 30,000 -to- 56,000 square-feet of additional space to the stores as part of a complete remodeling, and using that added space for fresh foods and groceries.

Additionally, following on the heels of the opening of its first-ever smaller-format, hybrid supercenter in Modesto, California in 2008, which is located in an about 90,000 (less selling space than that though) square-foot building, which formerly held a discount warehouse supermarket and a drug store, Walmart has been and is searching for similar sized - in the 75,000 -to- 1000,000 square-foot range - vacant big box stores in Northern California that it can remodel and turn into edited versions of its Supercenters, like it did with the Modesto store on McHenry Avenue in the city of 205,000, in Stanislaus County [See - May 6, 2010: Going Smaller & Getting 'Hybrid': Walmart's Smaller Supercenter in Vacant Retail Buildings Strategy Began in 2008]

Lastly, Walmart is proposing numerous new supercenters in Northern California, including in the Sacramento region - one is planned for Elk Grove in the southern part of town in fact - the Northern Central Valley (Stockton, Modesto, Merced regions), the Bay Area (in a limited way though because approval is difficult to get) and elsewhere.

The reason Walmart needs a multi-format and multi-square-footage strategy in Northern California is for two primary reasons: (a) obtaining approval for mega-supercenters is extremely difficult in the region (some cities and counties even have ordinances banning the big stores) and (b) the geographical (density) limitations in key cities like San Francisco, Oakland, San Jose, Sacramento and a couple others make locating and 100,000-plus square-foot supercenters (and even 75,000 square-foot units) nearly impossible. Therefore, focusing on a food and grocery- centric format like the 20,000 square-foot (or slightly bigger or smaller) Neighborhood Market by Walmart prototype is key for Walmart to become a grocery retailing player in the Northern California, as well as in numerous other similar places in the U.S., region.

April 25, 2008: Going Smaller: Wal-Mart Might have Found A Solution or Two to Much of the Opposition to its Mega-Supercenter Stores in the USA

September 15, 2008: Wal-Mart Expanding its Discount Store-to-Supercenter Conversion Program As Part of its Strategy to Grab Even More Food and Grocery Sales Market Share

October 5, 2008: Wal-Mart's Marketside is More Than the Sum of the Parts of its Other Formats; While Time and Consumers Will Judge, We See the Format As A Stategic Fit

October 6, 2008: 'The Promotional Pundit:' How Wal-Mart Can Use its Supercenters to Create Customers For its New Small-Format Marketside Stores in Arizona

If they need stores, F&E has a bunch of empty spaces they aren't using

slash f&e ceo pay & open those stores that have just been sittin there for years. i aint no ceo mega millionare but this just makes good biz sense.why are those brits still throwing bad money at bad money.

auburn ca. needs a wallmart,which would pull in grass valley,alta Weimar,applegate, dutch flat,colfax, forest hill, meadow vista, other small communities. the highways are crowed with cars going to wall mart in Roseville, ca. that is where you go to see all your friends and neighbors, please reconsider giving us a wallmart. thank you for your time.