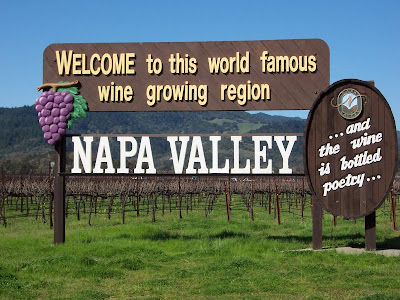 The Napa location is at Jefferson Street and Imola in the central city of the Northern San Francisco Bay Area region known throughout the world for its grape-growing and wine making (and specialty and organic foods) industries, along with its food and wine culture.

The soon-to-be Fresh & Easy store at Jefferson Street and Imola in Napa - which will be housed in a vacant building that for many years was home to a grocery store owned and operated by local grocer Vallergas Markets but was closed by the family-owned retailer a number of years ago - is one of the original 18 (37 total in Northern California) Bay Area markets the grocer announced in January 2008 it planned to open in the region. However, instead of starting to open the 37 Northern California Fresh & Easy Neighborhood Market stores by early 2009 as planned, Tesco's Fresh & Easy postponed the launch, finally announcing the early 2011 date last month.

1. Create an expanded wine department, featuring a localized Napa/Sonoma design motif and expanded Napa/Sonoma Valley-produced wine selection, along with including a wine tasting bar. Doing this is not only smart merchandising for the store location - Napa - but it also would serve as the hanging out of a welcoming sign by Tesco's Fresh & Easy to potential Napa shoppers, saying: 'We've incorporated what is a major part of Napa culture and commerce into our store.'

The neighborhood, which we've visited, has a need for this type of offering. It would be a major attraction for the store, along with helping to create a stronger customer base. Shoppers would also spend more time in the store, which generally leads to buying more than when they dash in and out. That equals higher market basket purchases. Plus, it's the perfect location for Fresh & Easy to experiment with such an in-store venue - and the building has ample room for it.

3. Locate a small "neighborhood/customer" service center kiosk inside the store, near the front-end, where a clerk would cash payroll and government checks, sell money orders, gift cards and offer various other for-pay services (prepaid cell phones maybe, ect.), along with some related goods like postage stamps and the like. Napa, and the neighborhood, has a significant Hispanic population, who work in the wine industry. Many of these folks use the local supermarkets as their banks. They are wonderful and loyal customers. They buy their groceries at the stores where they can cash their checks.

In this June 26, 2010 piece - Tesco Planning to Announce in July When First Northern California Fresh & Easy Neighborhood Market Stores to Open - we said Tesco's Fresh & Easy planned to announce when it would open its first batch of stores in Northern California before the end of July. The grocer made its announcement 19 days later, on August 19, 2010. July-end was the planned target announcement time line.

We've learned a Northern California regional director been hired by Tesco's Fresh & Easy. However, we're witholding the person's name for now, so as to not cause any difficulties regarding his current position.

Tesco's Fresh & Easy Neighborhood Market has placed advertisements, including in local daily newspapers with circulation in the respective cities, for store managers for the first eight announced Northern California stores, along with for the Napa store - See: Retail - Store Manager (Napa, California).

Fresh & Easy hasn't publicly announced, via press release or other means, that the Napa store has been added to the first batch of stores it plans to open in early 2011.

The eight stores, plus one, are:

[Also: click here , here and here for a selection of past stories on Fresh & Easy and Northern Calfornia.]
Posted by Fresh & Easy Buzz at 6:42 PM