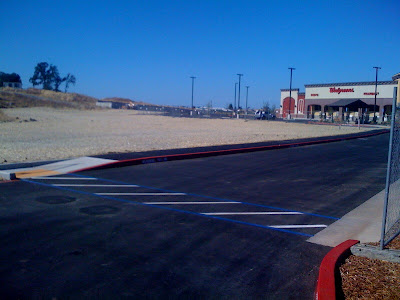 Above is the parcel in the Sutter Creek Crossroads center where Tesco plans to build a Fresh & Easy Neighborhood Market store. Notice the close proximity to the Walgreens, which is opening today. [Photo credit: Photographs exclusive for Fresh & Easy Buzz by Anthony Spinetta.]

Tesco's Fresh & Easy Neighborhood plans to build a store in the Northern California town of Sutter Creek, in the Sutter Creek Crossroads shopping center being developed by Sacramento, California-based Petrovich Development Company. The center is at Hwy 104 and Hwy 49.

Sutter Creek, a small town of about 2,500 that's often called the 'Jewel of the Gold Country,' is 47 miles from Sacramento, in Amador County near Jackson, in Northern California's historic Gold Country region. The town takes its name from John A. Sutter who owned the sawmill in nearby Coloma where gold was first found in the Mother Lode region in January of 1848, ushering in the California Gold Rush.

Petrovich Development company says the Sutter Creek Crossroads shopping center is designed to draw from a ten-mile radius. The population within the 10-mile radius of the center is about 29,500. It includes the nearby towns of Jackson and Martel, as well as an unincorporated area.

The Sutter Creek Planning Commission and City Council are currently considering a couple amendments recently presented by representatives of Petrovich Development Company that are required in order for the future Fresh & Easy store to be built. The amendments to the developer's plans, which were drawn up long before Fresh & Easy was considering the location, involve basic things like boundary lines and drainage issues, according to the Sutter Creek Planning Commission.

The planned Tesco Fresh & Easy market is to be located on an about 14,000 square-foot parcel (pictured at top) across from a new Walgreens drug store, which is set to open today, in the Sutter Creek Crossroads center.

According to our sources, Tesco has either already bought the parcel in the shopping center or plans to do so soon. Tesco's Fresh & Easy Neighborhood Market bought a parcel from Petrovich Development some time ago in Elk Grove, California, at Florin & Calvine, for a future store in the Sacramento suburb. It's one of the two Elk Grove stores in the original 19 stores in the Sacramento/Vacaville region announced by the grocery chain in 2008.

Tesco's Fresh & Easy has yet to begin construction on that El Grove store. Based on our information, we don't expect the grocer to start construction on the Sutter Creek unit this year. Of the eight Northern California stores Tesco plans to start opening early next year, none are in the Sacramento region. As such, the grocer has plenty of stores - 19-plus units in the region - that have been in the pipeline since early 2008 to open before it begins construction on future units like Sutter Creek. 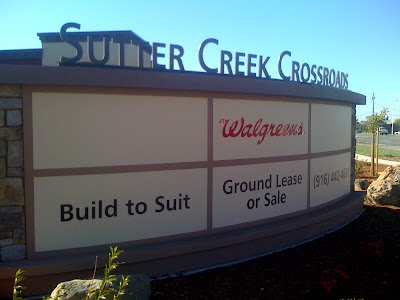 The Walgreens Drug store opening today is the first major retail store in the Sutter Creek Crossroads shopping center, as you can see in the photograph above.

A Safeway supermarket, which opened in 2006 in the nearby town of Martel, is about a mile away from the center and future Fresh & Easy store, and a Save Mart supermarket is located just slightly farther away on Highway 88 ,near Martel.

"The town of Sutter Creek contains only one independent convenience store and no other grocery store or supermarket of any sort," Spinetta says. "There used to be an independent grocer across the street from the Fresh and Easy site, but that grocery store closed at least ten years ago. Fresh and Easy will compete directly for business with Safeway and Save Mart for the city of Sutter Creek and the many households on Ridge Road to the east."

"The entire Jackson/Sutter Creek area is probably overbuilt in terms of supermarket square footage per-capita," Spinetta says. "The Jackson city limits include a full line Raley's, and a Cost Less Foods discount supermarket. Safeway moved their store from Jackson to the current site in Martell due to the obsolescence of their Jackson store and a lack of suitable parcels for relocating within the city. Martell includes the fairly new Safeway, a Kmart, which is dying a slow death but still open, a Walmart that's steadily increasing its food selection, the Save Mart, and now the proposed Fresh and Easy." Cost Less Foods Company is a nine-store, privately-owned grocery chain based in Modesto, California.

In our August 21 piece - April 2010 Prediction Correct: February 2011 Target to Open First Eight Fresh & Easy Neighborhood Market Stores in Northern California - we said Tesco will continue to acquire future Fresh & Easy store sites in Northern California prior to opening its first eight stores in early 2011. The Sutter Creek location in the latest one - and there are more to come. Stay tuned.

[Also: click here , here and here for a selection of past stories on Fresh & Easy and Northern Calfornia.]
Posted by Fresh & Easy Buzz at 3:11 PM