Safeway Stores, Inc. is planning to break ground soon on its new flagship "Lifestyle" format supermarket in a mixed-use development at Valley Avenue and Bernal Avenue, off reeway I-680, in the grocer's headquarters city of Pleasanton, California, which is in the eastern part of the San Francisco Bay Area. Safeway's corporate campus and Northern California Division offices are in Pleasanton, just a short drive from the Bernal flagship store site. Safeway, which operates about 1,714 stores in the U.S. and Canada, employees about 3,000 at the corporate headquarters.

The new flagship Safeway store will be located on a 12.5 acre parcel which Safeway Stores, Inc. has acquired from San Francisco Bay Area developer South Bay Construction, which is heading up the development at Valley and Bernal avenues. The 12.5 acre retail portion of the development is called the Pleasanton Gateway center 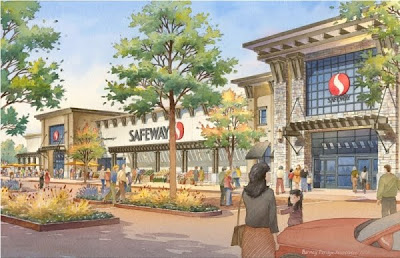 The total mixed-use development parcel is 40 acres. South Bay Construction plans to construct seven office buildings on the remaining 27.5 acres. Homes and apartments have already been build next to the 40-acre parcel, on what is a 370-acre parcel dedicated to residential housing, along with various public facilities being built by the City of Pleasanton. For example, the city build a number of baseball fields for public use on the site last year.

In addition to the new Safeway supermarket, the 12.5 acre parcel owned by Safeway Stores, Inc. is slated to include numerous smaller retail buildings and restaurants. Safeway is developing the 12.5 acres through its in-house development firm, Property Development Centers.

Current plans for the new flagship Safeway store show the supermarket to be about 55,000 -to- 60,000 square-feet. In addition, Safeway is reserving 10,000 square-feet next to the store for future expansion of the store.

The new supermarket will feature all of the newest aspects of Safeway's "Lifestyle" format - its in-store Signature Cafe prepared foods department with a sit-down area for dining, spacious store-within-a-store areas for the grocer's 'O' Organics' and 'Eat Right' organic and healthy foods store brands, numerous bulk features like in-store nut, salad and sandwich bars, a coffee bar as part of the in-store fresh bakery. [See - April 8, 2010: The Branded 'Signature Cafe' in Safeway Stores' Soon to Open 'Social Safeway' in Washington D.C. Should Turn A Few Heads]

The store will also include an in-store pharmacy. Safeway originally planned to include one of its gasoline fueling stations next to the store. However, based in part on objections by local residents and a Shell gasoline station across the street from where the store will stand, the grocery chain has decided not to include it in the development.

Over the last few weeks, David Zylstra, senior vice president of Safeway's Property Development Centers and Scott Trobbe of South Bay Construction, have both made presentations to various groups in Pleasanton about the new flagship store, as well as the 12.5 acre retail portion of the 40-acre development as a whole. Those groups include the city's Chamber of Commerce, the Pleasanton Downtown Association and other neighborhood and business groups in the city.

The vice president of Safeway Stores' development arm also said in the meetings that Safeway is planning to clear the land for the store on the 12.5 acre parcel and start construction either late this year or in early in 2011. He said the target date to open the new store is before Thanksgiving 2011.

The start date depends on gaining approval first from the Pleasanton Planning Commission and then from the city council. The city's planning commission says it's planning to review Safeway's plans in early September. Planning Commissions in California review and approve or disapprove of such projects. However, their approval isn't legally binding. Once approved, the city council of a given municipality must give the final approval. They can also overturn a planning commission's approval.

Safeway first talked to the City of Pleasanton about the new flagship store in 2008. The grocer has sought input from the city and numerous local groups since then, as it developed its plans for the store. As such, most local observers say they expect approval for the project in fairly short order following the first review by the planning commission in September, as does Zylstra of Safeway's development firm.

The Bernal store will be Safeway's second in its hometown city. The existing Safeway unit is at Santa Rita Road, which is on the other side of the city. The store does well. Safeway has told the city and others it has no plans to close the store when he flagship supermarket opens in 2011.

As of late April 2010, when a Fresh & Easy Buzz correspondent last visited the future Fresh & Easy Neighborhood Market location in the Rose Pavillion Shopping Center, no remodeling work has been done on the vacant building that's to house the Fresh & Easy store. Sources in Pleasanton tell us that's still the case.

However, the Ranch 99 supermarket mentioned in our April 19, 2009 piece has opened.

Our Safeway Stores' sources tell us that since the new Safeway store is so close to corporate headquarters, meaning frequent visits from company brass when it opens, that nothing will be spared in terms of making the store a showcase flagship store. They also tell us close to 200 employees will be hired to staff the new store when it opens in 2011.

Meanwhile, as we've been reporting on and analyzing in our ongoing "Northern California Market Special Report," series, the market as a whole, with some exceptions, is booming with activity by food and grocery retailers at this point in time. Safeway's plans to open its new flagship supermarket in Pleasanton next year just adds to that boom - and increased competitive activity, particularly in the San Francisco Bay Area region, home to about 7 million people, who all have to shop for groceries and eat.

Additionally: Click here to read a selection of past stories on Tesco's Fresh & Easy Neighborhood Market and Northern California. Click the "older posts" link at the bottom of the linked pages for additional posts on the topic.