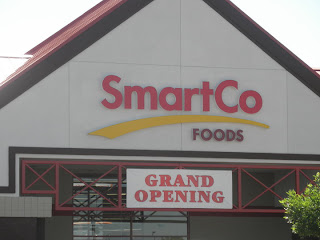 There's generally something fundamentally wrong from a senior management and strategic policy perspective when a food and grocery chain like Southern California-based Smart & Final launches a major new venture, such as it did with its five-store SmartCo Foods launch into the Denver, Colorado market in June 2010, then pulls the plug on it less than five months later, which Smart & Final did on Monday, announcing its plans to close the five stores "due to disappointing sales that fell below the company’s expectations." See the November 15 announcement here. The first SmartCo Foods' store opened in Denver, on June 23, 2010. [See - Smart & Final to Open its New Format SmartCo Foods Stores in California and Arizona.]

There's no question the Denver-region SmartCo stores have been performing poorly. But the real question is why Smart & Final would invest the considerable financial and human resources it has to develop a new format - SmartCo Foods - open five stores in metro Denver, from June-August 2010, and then close all five of the stores less than five months later? After all, new formats take time to develop - at least longer than five months - don't they?

Also, who did the math - the top line and bottom line figures - at Smart & Final? The math that was signed-off on by the CEO. Did the company project break-even or even profit for the five Denver-area SmartCo Foods stores after just five months, for example?

Therefore, an obvious logical and rational conclusion would be that Smart & Final's CEO, George Golleher, and his team, including president Dave Hirz, no longer have confidence in the hybrid supermarket, warehouse store, farmers market-style SmartCo Foods format, right?

However, that doesn't appear to be the case.

Smart & Final opened a SmartCo Foods store today in the Twin Peaks shopping center in Lake Forrest, in Southern California, the same day the retailer began deep-discounting for closeout the products in the five metro Denver, Colorado stores, which it hopes to close by the end of the month.

As we reported in this August 29, 2010 story - Smart & Final's First California SmartCo Foods Store to Be in Southern CA City of Lake Forest - the Lake Forest store has been in the works for a while. It's a renovation project involving one of Smart & Final's non-membership warehouse stores.

But despite this practical reality, we have to question the strategic thinking at the top of any grocery chain that would announce the complete scrapping of a less than five-month old venture -SmartCo Foods/metro Denver - on Monday, and then follow that up two days later with the opening of a store in Southern California - the first SmartCo Foods unit in the region - under the same just-failed format.

But Smart & Final president Dave Hirz says the retailer is committed to the SmartCo Foods' format (just not in metro Denver we suspect), saying in the November 15, 2010 press release: "While we regret having to close these stores and the impact this will have on our Colorado employees and customers, we remain committed to the SmartCo Foods concept and will open stores under the SmartCo Foods banner in other markets where we believe the concept will be successful. The first of these will open later this week in Lake Forest, California."

It's not impossible a SmartCo Foods store could do well in Lake Forest, California, despite the fact Smart & Final has concluded that five of the same-format stores have failed to meet performance expectations after being open for less than five months in metro Denver, Colorado. But such "one off" circumstances are not what strategic thinking is made of.

In other words, if the SmartCo Foods' format is a flop in Denver, can it really succeed in Lake Forest or elsewhere in Southern California? As we said - maybe? There's always a maybe. But the point is, any analyst worth his or her salt must question the strategic thinking behind making such a decision to open the Lake Forest SmartCo Foods format store at all. Why not move on from the format after taking what will be a significant financial and reputational loss in Colorado?

But then the entire rush project by Smart & Final to open the five SmartCo Foods stores in metro Denver in a couple months, along with regularly spinning that they would be the first of 20 -to- 25 units in the market, and then closing all five stores after just 5 months, appears to be the strategic thinking of the same decision-makers who are now attempting to throw the Lake Forest SmartCo unit opened today against the wall and see if it will stick (succeed).

We're supportive of retailer risk-taking and new ventures, which is one reason why Fresh & Easy Buzz has been one of the few publications to pay close attention to and regularly write about Smart & Final's SmartCo Foods launch and six month experiment in Colorado. We also hope the Lake Forest, California SmartCo is a success.

But something about Smart & Final's SmartCo Foods' venture in Colorado and now in Southern California just smells fishy, and we mean fishy beyond the seafood department.

From a strategic perspective it appears to us Smart & Final's senior management has been and is flying by the seat of its pants with SmartCo Foods, which is sad because the SmartCo store-level employees and small corporate staff in metro Denver, such as the folks doing promotions and social media, were doing what in our observation was an excellent job.

Perhaps if there would have been some smarter strategic thinking at the top at Smart & Final, those Denver-area SmartCo Foods' employees would have had a little longer than five months to do the good work they've been doing.

>August 17, 2010: And Then There Were Five: Smart & Final Completes its Mission of Opening Five SmartCo Foods Stores in Metro Denver Before Summer Ends