Can you guess the name of the retailer that's opened more new food and grocery "markets" in Southern California over the last 18 months than any of its competitors, and has managed to do so without opening more than a handful of actual new stores?

Over the last 18 months, Minneapolis, Minnesota-based discount retailer Target has opened 87 of its 10,000-12,000 square-foot "P-Fresh" store-within-a-store fresh food and grocery markets inside 87 of its discount format stores throughout Southern California.

Target currently has 141 discount format stores in Southern California, which means, if it chooses, the retailer still has 54 existing units available to add additional "P-Fresh" fresh food and grocery markets in.

There are seven SuperTarget combination food-grocery-general merchandise stores in Southern California. The stores are similar to a Walmart supercenter in terms of product selection.

Target operates 246 stores in California and 1,752 stores in the U.S. The majority are discount format units. 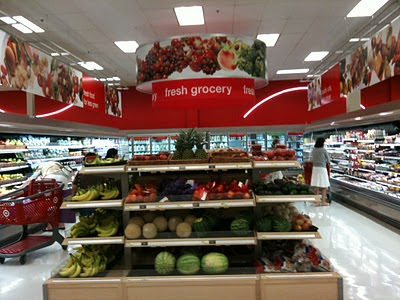 Target plans on installing "P-Fresh" markets (pictured above) in a number of those remaining 53 Southern California discount format stores by the end of 2011, along with including the 10,000-12,000 square-foot fresh food and grocery markets in most if not all of the new discount format stores it opens in the region.

Target is also developing one of its new-prototype, smaller-format stores in the 7+Fig mall in downtown Los Angeles.

The urban Target store, which will be about 90,000- 100,000 square-feet, will have a heavy emphasis on food, groceries and household basics, according to John Griffith, Target's executive vice president of property development. The store will be located in a combined space formerly occupied by Macy's and Bullock's department stores.

Target's discount format stores average about 130,000 square-feet. It's combination food and general merchandise SuperTarget stores are in the 175,000 square-foot range.

The downtown Los Angeles store is the second urban unit announced by Target. The first will be in Seattle, Washington. Both stores are set to open in 2012, according to Griffith.

As a point of comparison, Target's 88 "P-Fresh" store-within-a-store units, which it's opened over the last 18 months, gives it nearly the same amount of fresh food and grocery "units" in Southern California as Tesco has with its current 92 stand-alone Fresh & Easy Neighborhood Market stores.

Tesco has opened the 93 Southern California Fresh & Easy units over a three-year period, starting with the first batch of stores it opened in the region in November 2007. There are 92 Fresh & Easy stores in Southern California. A store in Moreno Valley was closed this month. The Fresh & Easy markets average about 10,000 square-feet, very similar in size to Target's "P-Fresh" in-store markets.

Going beyond the comparison between Target and Tesco's Fresh & Easy to the larger Southern California region itself, Target Corp., with its 88 "P-Fresh" in-store markets, and Tesco, with its 92 small-format Fresh & Easy Neighborhood Market stores, have combined added the equivalent of 180 new 10,000 square-foot grocery stores to the region since late 2007. That's a whole lot of new grocery stores over a three year period, even for vast Southern California.

Further, the additional food and grocery retailing space added by Target and Tesco's Fresh & Easy is in addition to all of the new stores opened by the region's other food retailers - Kroger, Safeway, Walmart, Costco, Trader Joe's, Stater Bros., Albertsons, Whole Foods Market, Sprouts Farmers Market and numerous others - over the last three years.

Below are the 87 Southern California Target discount stores with "P-Fresh" fresh food and grocery markets inside: