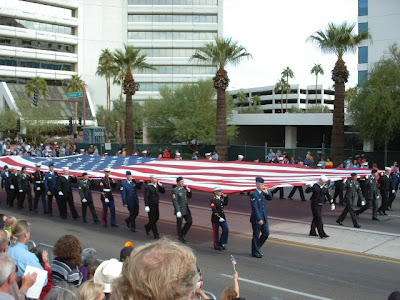 Walmart Stores, Inc. and its Walmart Foundation are investing $10 million over the next five years to assist U.S. veterans, with a special focus on supporting job readiness and training programs.

"According to the U.S. Department of Labor, more than 250,000 veterans were unemployed as of March 2010," Profit said today. "As one of the nation’s largest private employers of veterans, Walmart made this $10 million commitment to address the alarming unemployment situation facing our veterans and create even more job opportunities for those who so bravely protected our country," he added.

"We strive to support their heroism in a variety of ways and continue to work to understand and meet their specific needs. We know we can make a great difference in addressing some of their biggest challenges, especially to those returning home from service in need of jobs, support and services to assist them in re-acclimating to life back at home."

As part of its announcement today Walmart outlined various initiatives it's currently undertaking in support of American veterans. According to Profit, those initiatives include:

Below are examples of specific veteran-support initiatives Profit says Walmart has already funded:

Veterans’ Education
The Walmart Foundation is committed to providing support to our nation’s veterans as they pursue their educational goals. Recent grants included in these efforts are:

• American Council on Education (ACE) – The Walmart Foundation awarded ACE a $2.5 million grant to support successful veterans education programs across the country. Through a competitive grant process, ACE awarded 20 Success for Veterans grants of $100,000 to institutions across the U.S operating model programs advancing access and success in higher education for veterans and their families.

Military Family and Transitional Support
The Walmart Foundation recognizes that those who are returning home active duty as well as their family members face significant challenges as they adjust to life back at home. The following grants are a few examples of our ongoing efforts to serve the needs of military families and returning veterans:

• Veterans Green Jobs – Through its ongoing partnership, Walmart Foundation has awarded a total of $1.25 million toVeterans Green Jobs to support the development of four training sites, which will help veterans develop green job training skills. The training sites – which will be built in Washington, Colorado, New Mexico and Louisiana – will assist returning military personnel facing the challenging task of reintegrating into civilian life.

• Sesame Workshop – Through donations totaling $1.97 million, the Walmart Foundation has partnered with Sesame Workshop, the organization behind Sesame Street, to develop bilingual outreach kits for young children of the U.S. Armed Services, National Guard and Reserves. The kits help military children and families manage challenges, including possible anxiety caused by a parent’s deployment or reunion after a period of absence or frequent relocation. Our most recent funding supports an initiative that will provide a comprehensive set of multimedia resources that will be made available to children coping with the death of a parent.

• National Center on Family Homelessness – The Walmart Foundation has donated more than $1 million to the National Center on Family Homelessness (NCFH). This funding has supported their Community Circles of Support for Veterans’ Families initiative, which works to improve high-quality emotional health and family support services for veterans and their families through integrated community support programming. As a result of this support, the organization released Engaging Veterans and Families to Enhance Service Delivery: A Tool Kit for Community-Based Organizations to discuss the impact of Post-Traumatic Stress Disorder (PTSD) and Traumatic Brain Injury (TBI), and offers useful tools for veteran outreach, including understanding the unique experiences of female veterans, and maximizing veteran participation in programs and services.

Walmart founder Sam Walton is a veteran of World War II, where he served as a Captain in the U.S. Army Intelligence Corps from 1942-1945. Former President George H. W. Bush presented him with the Medal of Freedom on March 17, 1992, just a few weeks before Walton died.

In his autobiography, "Sam Walton: Made in America," Walton credits his military service as being key to his future career as an entrepreneur and retailer.

Sam Walton, who became an Eagle Scout at age 13, went to high school at Hickman High in Columbia, Missouri and remained in Columbia to attend college, graduating from the University of Missouri at Columbia in 1940 with an economics degree, started his career in retail at J.C. Penny in Iowa right after getting out of the Army in 1945.

A short time later Walton left J.C. Penney and opened his own variety store in Newport, Arkansas, which he operated for a few years.

In 1951 he and his wife Helen opened Walton’s Five and Dime in Bentonville, Arkansas, which was the forerunner to Walmart.

A mere 48-years later Walmart Stores, Inc. not only is the number one global retailer, with annual sales approaching $500 billion, it's also ranked by Forbes as the biggest corporation in the world based on annual revenue. It's 2009 annual sales of $408,214 billion dwarfs the second and third-largest corporations, Royal Dutch Shell ($285,129) and Exxon Mobil ($284,650), on Forbes' 2010 biggest global companies list.

The stark reality in the U.S. today is that only one half of one percent of all Americans serve in today's all-volunteer military, according to the Pentagon. To take that a step further, it means fewer than one percent of all us have been fighting America's two wars - Afghanistan, which is nearly a decade old, and Iraq, which although it's winding down will soon hit year number nine.

The U.S. government, American business, and all of us collectively and individually owe that one percent and all the living veterans who came before them all we can and then some, particularly right now in assisting those veterans returning from Iraq and those who will soon hopefully be returning from Afghanistan.

Walmart's five-year commitment to America's veterans this Veteran's Day is an excellent start. We encourage other food and grocery retailing chains that aren't already doing so, to do what they can, (and then do a little more) to assist veterans, including offering them jobs and promotions, helping to fund their training and advanced education, and offering other types of assistance. They are one of the best investments a business can make.
Posted by Fresh & Easy Buzz at 2:48 PM