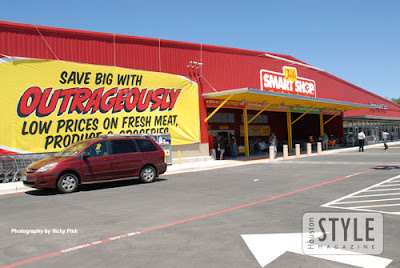 H-E-B's Joe V's Smart Shop, at 12035 Antoine Drive, Houston, Texas. The Joe V's format is everyday-low-price focused, limited assortment and fairly no-frills. The flagship store, which opened on May 5 of this year, is about 50,000 square-feet and stocks approximately 9,000 SKUs. It offers all the traditional supermarket departments, from meat, produce and deli, to perishables, grocery and non-foods. [Photo credit: Vicky Pink for Houston Style Magazine. Photo courtesy of Houston Style Magazine. The photograph was taken on may 26, 2010.]

On August 26, 2010 we wrote and published this piece - What's Up With Joe? Texas Grocer H-E-B Planning 'Major Announcement' About its Joe V's Smart Shop Soon - about a 'major announcement' we learned Texas food and grocery retailer H-E-B was soon to make about its start up Joe V's Smart Shop discount grocery chain. 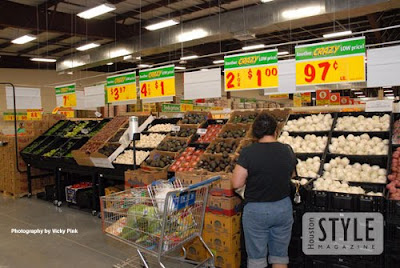 Drum roll please... We've now learned what H-E-B's major announcement about its Joe V's Smart Shop is - and we got it right in prediction number one.

The grocer plans to open the East Houston Joe V's Smart Shop unit before the end of this year.

It appears Fresh & Easy Buzz not only is the only publication, including the local Houston newspapers, we can find, based on doing a number of different google keyword searches moments ago, that reported on Joe V's upcoming announcement in our August 26 piece, we also to appear to be the first publication to report on what that 'major announcement' is.

Prior to publishing this piece we conducted Google searches under 'Joe V's Smart Shop,' 'Joe V's', 'H-E-B,' 'HEB,' 'H.E. Butt Grocery Company,' and a couple others, and can't find any reports of the announcement, including in the local Houston, Texas online newspaper sites, or in the major mainstream supermarket industry trade publications. We may have missed such reports. If you find a story published prior to today - Sunday, September 12, at 11:01 am - about H-E-B's second Joe V's Smart Shop store, please let us know using the comments box at the end of this piece.

We don't care all that much about being the first (or even the only) publication we can find to report this significant news.

Instead, we're just surprised to be unable to find any other coverage of the second store of a new format- Joe V's Smart Shop - from one of America's largest family-owned - over $15 billion in annual sales, over 300 stores in Texas and Mexico, and about 75,000 employees - and best merchandised-operated food and grocery chains, San Antonio, Texas-based H-E-B.

H-E-B , which is celebrating its 105th birthday this year, was founded in 1905 by Florence Butt, who opened a small grocery market called C.C. Butt Grocery Store in the Texas Hill Country town of Kerrville. In the 1920's, Florence Butt's youngest son, Howard, started to grow the company and store-count. Later on the company name was changed to the Butt Grocery Company and then to H.E. Butt Grocery Company, as in Howard Butt. The family has used the name H-E-B since the 1940's, however.

105 years, 300-plus more stores, numerous banners and formats, multiple private brands, and about $15-plus billion in annual sales later, Texas born, bred and based H-E-B is still owned by the Butt family, which continues to grow the food and grocery retailing company not only in size but in multiple formats - ranging from the flagship H-E-B banner and the very successful upscale Central Market, to its newest, the price-impact Joe V's Smart Shop chain, the second store of which opens in East Houston later this year.

I have to agree with the comments on swamplot website - it is like HEB Pantry making a comeback. ALDI is unique in itself - it may appear to be a cousin of Trader Joe's, but it can differentiate from other grocers in terms of store delivery. Looking at the pictures of Joe V's is like a downsized version of HEB - same products, but maybe cheaper; I don't know.

By the way, posters on city-data forum, specifically, San Antonio is complaining about HEB downgrading their stores.

HEB may be a textbook example of class warfare - the good stores (Buffalo Market) are on the west and northwest side, while the not-so-good stores are on the east and south side.

Same with Austin (west/east divide) and San Antonio (north/rest of the city).

Do they accept coupons?