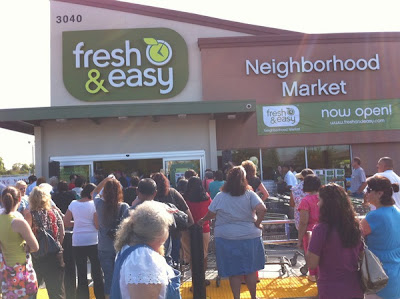 Customers wait to enter the New Fresh & Easy store in Fresno, California this morning. The grand opening started at 10 am.

The two new markets, which make 165 Fresh & Easy stores as of today, are located in the Fresno Metropolitan region in California's Central Valley.

One store is in Fresno, in a shopping center on the southeast corner of Cedar and Shields avenues. The address is: 3040 North Cedar Avenue. The second Fresh & Easy market is right next door to Fresno, in Clovis. The Clovis store, the second Fresh & Easy unit in the city, is on the northwest corner of Herndon and Fowler avenues, at 1725 Herdon Avenue.

Grand opening celebrations, which started this morning at 10 am, are currently going on at both stores.

In addition to its seven stores in the Fresno region in California's Central Valley, Tesco has seven Fresh & Easy Neighborhood Market locations farther south in the valley, in the Bakersfield region. Five of the seven stores are in Bakersfield; one is in nearby Wasco; and the other in Delano.

Fresh & Easy by the (store) numbers - and regions

Below is a tally, as of today, of the 165 Fresh & Easy Neighborhood Market stores by region:

The September 22 openings are the last three new stores, of the nine units that will have been opened by Tesco's Fresh & Easy this month, set to open in September. At the end of September, Fresh & Easy Neighborhood market will have 168 stores open and operating in California, southern Nevada and Metro Phoenix, Arizona.

But the fresh food and grocery chain didn't open any new stores in May, June, July or August 2010, instead it bunched them all up for openings this month - hence the 'Big Bang' title, so to speak. We reported Tesco's Fresh & Easy was doing this in a June 25, 2010 story: A Four Month Pause: No New Fresh & Easy Neighborhood Market Stores Set to Open Until September 2010].

Therefore, the high number of openings this month should be viewed in this light. For example, if the grocer opened just one new store a month, from May through August, and two stores this month, it would have achieved the same results, a total of nine new stores open and operating by the end of September 2010.

Fresh & Easy has followed this new store opening "bunching up" strategy all year.

To learn what the grocer did from February -to- April of this year in terms of new store openings, read our stories linked at the end of the piece here.

As we've previously reported, so far, according to our sources, three new stores are planned for October 2010 openings. However, new store openings are a moving target at Fresh & Easy Neighborhood Market headquarters in El Segundo, California. Therefore the number of new stores to be opened in October could increase before the grocery chain makes an announcement, which should be coming soon. Our reporting and planned number of new stores, three, is only as of today.

Could Tesco be thinking of taking over The Food Emporium of New York with branches in Manhattan New York state and Connecticut. What do you think about that purchase or some other small company in the USA which would fit in with their plans for F and E. Your Blog is always an excellent read.

No on the Food Emporium, that we are aware of.Would be a nightmare for Tesco and its Fresh & Easy right now.

I could see Wegmans and Whole Foods taking some of those stores. Also might be a good move for DeAgostinos to buy a couple, as it could be for Gristedes.

Any thoughts on those matches?

Regarding an acquisition, as we've suggested in a few pieces in the blog, the right one would make very good sense for Tesco.