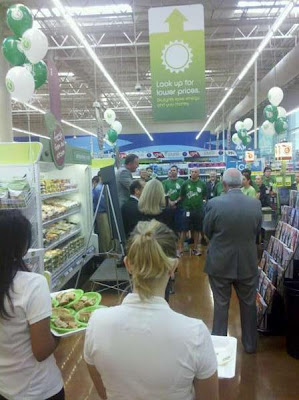 Tesco director and Fresh & Easy Neighborhood Market CEO Tim Mason (on the riser speaking and wearing the light grey suit jacket) addresses store employees at the new San Diego Fresh & Easy store, at 32nd Street and University Avenue, this morning. The man in the foreground of the photo on the far right (you see his back), looking at Mason and wearing the dark grey suit, is Jerry Sanders, the Mayor of San Diego. [Photo credit: Fresh & Easy Neighborhood Market.]

The fact California has the third-highest unemployment rate in the United States - 12.4% for August 2010, behind only Michigan, 13.1%, and Nevada, 14.4% - and its lawmakers in Sacramento are 85-days late in passing a state budget, which is causing additional harm to the economy, didn't stop two grocers - Fresh & Easy Neighborhood Market and Whole Foods Market - from opening a spate (four between them) of new stores in the Golden State today.

Tesco's Fresh & Easy opened three of its small-format (about 10,000 square-foot) fresh food and grocery stores today in San Diego County, in the far southern region of California - one unit in San Diego and two stores in Oceanside.

At the complete opposite end of the state, Whole Foods Market opened a nearly-50,000 square-foot market in the Sonoma County city of Santa Rosa, which is in the northern San Francisco Bay Area region. [View photos from the store's grand opening today here.]

Yesterday (and in the case of Whole Foods Market also over the weekend), we wrote about both grocers and their impending new store openings today. You can read our stories at the links below:

Grand opening celebrations were held, starting at 10 am, at all three of the Fresh & Easy stores opened today in San Diego and Oceanside.

Fresh & Easy Neighborhood Market CEO Tim Mason got an assist at the San Diego store opening this morning from the city's mayor, Jerry Sanders, who was on hand for the opening of the new store, which is at 3231 East University Avenue (32nd Street and University Avenue).

The Mayor offered congratulations to Tesco's Fresh & Easy Neighborhood Market on the opening of what is the grocer's second store in the city. "We are happy to see Fresh & Easy continue to expand and hire in San Diego, bringing more nutritious and affordable food options to our neighborhoods," Sanders said this morning.

Herb Schultz, a San Diego County region director for the U.S. Department of Health and Human Services (HHS), and San Diego County Childhood Obesity Initiative Director Cheryl Moder joined Mason this morning to celebrate the opening of the three Fresh & Easy stores and to help the grocery chain officially launch its revamped (high-fructose corn syrup has been removed and the line has all new packaging) and expanded (numerous new SKUs) fresh&easy 'goodness' private brand and line of healthy foods for kids.

Schultz, the Department of Health & Human Services official, put in a plug for Fresh & Easy's fresh&easy 'goodness' brand line this morning, saying: "We applaud Fresh & Easy's efforts to promote more food options so that all different types of neighborhoods have access to affordable, healthy food."

He also got in a plug for the important childhood nutrition program being led by First Lady Michelle Obama, her 'Let's Move!' campaign, saying: "Last week our partnership with the League of California Cities and the First Lady's Let's Move! Campaign resulted in California's cities unanimously approving a resolution in support of ending childhood obesity within a generation. Making sure that neighborhoods have access to better food options are pivotal to this effort." 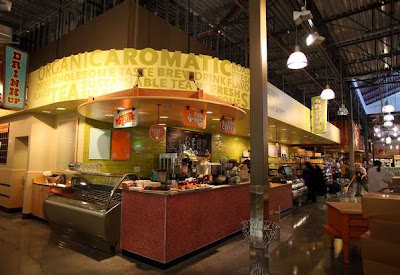 Across the state in Northern California, Whole Foods Market held a softer opening at its new Santa Rosa store today. However, it's planning a big bash on Sunday.

For Whole Foods Market, today's opening of the Santa Rosa store, its second in the city, is a milestone moment: The store, the grocer's 299th unit, opens during Whole Food's 30th birthday week.

In addition to Tesco's Fresh & Easy and Whole Foods, numerous other grocers have been and are opening new stores throughout California this year. Some people suggests it's because "people have got to eat." But as we often say in Fresh & Easy Buzz in response to that oversimplified explanation, "Yeah, but they don't have to buy their food at your store."

The main reason for all the new grocery store openings in the Golden State, despite the state's current high unemployment rate and the fact it's still struggling, although improving in some ways economy, is three fold: California is home to nearly 40 million people, nearly the population of the United Kingdom, and those are a lot of mouths to feed; the state has a history of rebounding - and it will - and lastly, there's a little, to quote the Beach Boys song of the same name, "California Dreamin'" in the hearts and minds of grocers, as is the case with many people from all walks of life.
Posted by Fresh & Easy Buzz at 7:29 PM