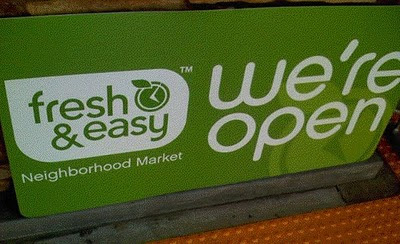 The four Fresh & Easy stores that opened today are all in Southern California, at the following locations:

Prior to today, Tesco operated 98 of its 159 fresh food and grocery stores in California. The opening of the four new stores today brings the total number of units in California to 102. The overall store count is now 163.

The majority of the 102 California stores are in Southern California. The others are in the Bakersfield and Fresno Metropolitan regions in the Central Valley.

There are 34 Fresh & Easy markets in Metro Phoenix, Arizona, and 27 units in the Las Vegas, Nevada Metropolitan region.

The Fresh & Easy store opened today in Rosemead, California is the grocery chain's first to earn GreenChill Certification. The store earned that "green" rating because of its naturally occurring carbon dioxide (CO2) refrigeration system, a first for any of the Fresh & Easy Neighborhood Market stores.

It's estimated such systems reduce the impact of an average grocery store's refrigeration useage on the ozone layer by about 70%, as compared to current industry standards.

The store's system was designed and built by Kysor/Warren. Source Refrigeration & HVAC, Inc., did the engineering and installation. Fresh & Easy Neighborhood Market's energy-useage management partner, Verisae, provided an energy management system that's being used to control the CO2 Refrigeration System, and its software is being used to help Tesco's Fresh & Easy track energy use and operating costs, according to the grocery chain.

The installation of the system is a part of Fresh & Easy's 'green grocer' strategy and program, along with being one of the many energy conservation measures the chain has been and is implementing in order to save money on the cost side of the balance sheet over time.

Next Wednesday, September 15, two more new Fresh & Easy stores will open, both in the Fresno region in California's Central Valley. The stores are at: Cedar Ave. & Shields Ave., in Fresno, and Herndon Ave. & Fowler Ave., in next door Clovis.

On September 22, the remaining three of the nine new stores are set to open.

Those stores, all in the Metro San Diego region in Southern California, are at:

The September 22 openings will mark the end of 'Big Bang' September for Tesco's Fresh & Easy Neighborhood Market. But not the end of new store openings for 2010.

The grocer hasn't yet announced any new store openings for October.

However, according to our sources, thus far three new stores are set to open in October. New store opening decisions are a moving target at Tesco's Fresh & Easy. Therefore, our number is as of today, and could change in the upward direction before an October new store opening announcement is made by Fresh & Easy Neighborhood Market.