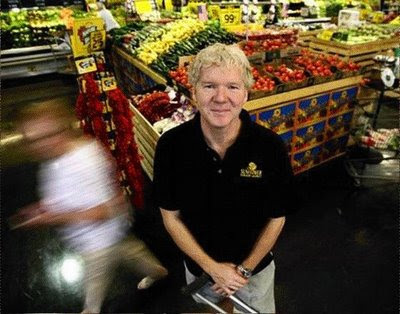 As he prepares to take his fast-growing, fresh produce-focused, combination natural/organic and conventional grocery chain into Northern California, Sunflower Farmers Market founder, CEO and chairman Mike Gilliland has just received an honor from his hometown Chamber of Commerce in Boulder, Colorado, which recognizes the retailer's 24-years as a food and grocery industry entrepreneur, much of it spent in Boulder. Gilliland founded Sunflower Farmers Market in Boulder in 2002.

Gilliland has been selected as a 2010 Entrepreneur of Distinction by the Boulder Chamber of Commerce Esprit Awards committee. The award recognizes and celebrates the outstanding spirit of entrepreneurship in Boulder County, the Chamber said today.

Gilliland will receive his award at the 26th Annual Esprit Entrepreneur Banquet on Thursday, October 7, 2010, from 5:30 to 9:00pm in the University of Colorado’s University Memorial Center Glenn Miller Ballroom.

In addition to Gilliland's award, the Boulder Chamber of Commerce is honoring three other local entrepreneurs at the October 7 event.

"I am honored to have been chosen for this distinction," Gilliland says. "It’s terrific that the Boulder Chamber of Commerce recognizes and acknowledges the hard work and dedication of local entrepreneurs, as well as the unique challenges and opportunities that entrepreneurs face. I’m proud to be included in an event that recognizes some impressive local leaders and their indomitable spirit."

The city of Boulder, Colorado and Boulder County is a pioneering American region when it comes to the natural/organic food and grocery industry. Along with Northern California, the city of Boulder and the surrounding region has arguably spawned more industry start ups and successful natural and organic foods' companies than anywhere else in the U.S. And Gilliland, having founded and headquartered two retail chains - Sunflower Farmers Market and Wild Oats Markets - in Boulder, is a major contributor to that developement.

Sunflower Farmers Market, which Gilliland founded in 2002, remains headquartered in Boulder, as well as having some of its corporate functions in Arizona.

Gilliland also co-founded Wild Oats Markets in Boulder in 1987. He served as Wild Oats' CEO from 1987-2001, growing it from a single store to a publicly-held chain of 115 stores and about $1 billion in annual sales, when he left. Wild Oats' board, its investors, and Gilliland were all ready for a change in 2001.

In 2007, Wild Oats Markets was acquired by its chief competitor, Whole Foods Market, Inc. for $565 million, following a number of years of serious struggle, which saw Wild Oats' sales and profits plunge and its stock share price drop considerably.

Shortly after acquiring Wild Oats, Whole Foods Market sold the Henry's Farmers Market and Sun Harvest stores, which were operated as a separate chain by Wild Oats and headquartered in Irvine, California, to Southern California-based Smart & Final, which has been growing Henry's ever since. Smart & Final has kept the same independent structure for Henry's, with some centralization in areas like private brands, as well as its headquarters in Irvine, where it remains based.

Gilliland, who attended the US Air Force Academy, the University of Grenoble in France, and received a Bachelor of Arts degree in history from the University of Colorado, didn't waste any time after leaving Wild Oats in 2001. He started Sunflower Farmers Market in 2002 and has grown the chain to 29 stores in six states - Colorado (10 stores), Arizona (7), Utah (2), New Mexico (6), Texas (3) and Las Vegas, Nevada (2) - since then.

In addition to opening numerous new stores in the six states over the next few years, Gilliland is looking to enter new markets, starting with Northern California, where he plans to open the first Sunflower Farmers Market store in early-to-mid 2011. He's also looking to Southern California and a couple other western states as new market regions in which he can open his stores, which use the slogan: Sunflower Farmers Market: 'Serious Food...Silly Prices!

Food and grocery retailing in the U.S. is interesting and dynamic thanks in large part to entrepreneurs like Mike Gilliland and many others like him.

There's John Mackey, the co-founder and co-CEO of Whole Foods Market; the Wegman's and the Butts, two entrepreneurial families who've build (and still run) what pound-for-pound are arguably the two best grocery chains in America, Wegmans on the east coast and H-E-B in Texas; Bob Piccinini, majority-owner, CEO and entrepreneur-in-chief of Modesto, California-based Save Mart Supermarkets, who since taking over as president and majority-owner from his father in 1981, of what was then a 40-store local grocery chain, has built it into a regional chain of 250 stores and about $5 billion in annual sales, all the while creating thousands of good jobs and donating millions of dollars to community organizations.

Gilliland and the others noted above are just a few of the many food and grocery retailing entrepreneurs and entrepreneurial families making their respective mark in the business - and making it much more interesting, dynamic and far better for consumers and the industry itself than would be the case if it was a strictly publicly-held, big chain industry, like is the case in many developed countries.