Fresh & Easy kicked off the program - which raises money for participating schools in the communities in California, southern Nevada and Metropolitan Phoenix, Arizona, where its 165 fresh food and grocery stores are located - yesterday, at the grand opening of its newest store in Fresno, California. [You can read our story about the two new Fresh & Easy stores that opened yesterday, one in Fresno and the other in next door Clovis, here: September 15, 2010: Two New Fresh & Easy Neighborhood Market Stores Open in Fresno, California Region Today.

In the 'Shop for Schools' program, participating schools receive a $1 cash donation from Tesco's Fresh & Easy Neighborhood Market for every $20 register receipt collected by students, parents, teachers, school staff and others, from any Fresh & Easy store.

At the end of the program, Fresh & Easy awards the top fundraising school in each of the three states a $5,000 bonus, in addition to the amount of money raised by the schools during the program.

This is the third year the program is being held by Tesco's Fresh & Easy. Last year, all the participating schools combined raised a total of about $800,000. Read our stories at the links below for information and details about the previous years' programs: 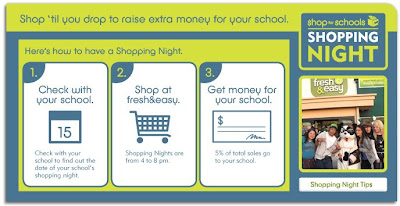 Fresh & Easy Neighborhood Market has found a way to leverage the 'Shop for Schools' program into increased foot traffic and sales in its stores, by creating what it calls 'Shop for Schools Shopping Night(s).'

The shopping nights are organized events in which parents, students, friends, teachers and school staffers at the participating schools get as many people as they can to shop at a Fresh & Easy store from 4 pm -to- 8 pm on the night their specific school is designated as having a 'Shop for Schools Shopping Night.' [How the shopping nights work is depicted in the graphic above, and here.] As part of the event, Tesco's Fresh & Easy donates 5% of all sales during the four hour period to the school. For example, If $10,000 is taken in during the four hour shopping period, the school gets an added $500 from the grocery chain.

Fresh & Easy Buzz has talked to a number of Fresh & Easy Neighborhood Market store managers, who've told us the shopping nights bring added foot traffic and sales, ranging from 15% -to- 40%, to their stores on the days the events are held.

Additionally, last year, one of the key strategies for the three winning schools - one in California, one on Nevada and one in Arizona - was that parents, school staff, students and others were able to round up throngs of friends and family to shop during the four hour shopping night event for their respective school.

We suspect participation in this year's program will be even greater than it was last year for a couple of reasons.

First, Fresh & Easy Neighborhood Market has opened a number of additional stores since the end of the last 'Shop For Schools' program ended, as well as extended its geogrpahical reach a bit.

Additionally, the 'Shop for Schools' program has become more known now that it's in its third year.

Lastly, and unfortunately, public schools in California, Nevada and Arizona are struggling economically as much this year, and in some cases even more so, than they were last year do to the continued economic recession and high unemployment, along with the fact that the federal government funds distributed to school districts from the early 2010 economic stimulus package are about all dried up.

As such, programs like Fresh & Easy's and others, like Safeway Stores Inc.'s annual '10% Goes Back to Schools,' program, which is currently going on and is in its sixth year, can provide much needed assistance, particularly for programs and other things needed but no longer allocated for in current very lean school district budgets.
Posted by Fresh & Easy Buzz at 10:18 PM