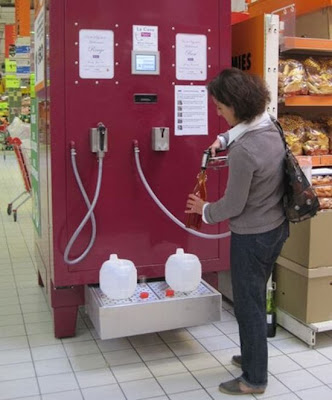 The big red gas station-style tank pictured above is just that - a self-service pump that dispenses wine. And it's showing up in an increasing number of supermarkets in France, such as in the Cora supermarket in Dunkirk, which was the first store to get one of the self-serve vino dispensers in late 2009. The tanks come in 500 and 1,000 liter sizes. They also come in a brushed chrome color, as well as in the red colored version.

The in-store, self-service bulk wine dispenser's inventor, Astrid Terzian, and her French company, La Cuve, Réserves Précieuses, are looking for grocery chains and store owners in the United States that would like to give the vino pumps a shot in their stores.

The unit, called La Cuve, operates in a straight-forward way - just think self-service gas pumps. Shoppers bring their own containers, such as gallon water jugs or any others they choose to use, to the store, go to the pump, decide on the varieties of wine offered they want and - just like at the self-service gas station, pump the wine into the container, instead of the automobile gas tank.

Once a shopper has finished filling the reusable container with his or her wine of choice, the machine prints out a label with the price, so the store's checkout clerk knows what to charge. The price labels can also include a bar-code.

The La Cuve wine pump's inventor says she came up with the idea for it in late 2008 because she was focusing on two growing consumer trends, environmental awareness and frugality. The elimination of single-use packaging, glass wine bottles and wine boxes, makes the bright red pumping unit not only a big bulk-wine dispensing machine, but a big 'green' one as well, in the environmental sense of the word.

Additionally, since the wine for the machines is shipped in bulk rather than in glass bottles or cardboard wine boxes, both of which are then packed in cardboard case boxes for shipping and store distribution, it's carbon footprint is much lower than individual bottle or box wine SKUs.

Currently, in France, the price of a gallon of wine from the in-store wine pumps is 1.45 euros per liter, which is about $2.

The wine pump seems to us like it might be ideal for certain natural foods chains, independents and retail cooperatives, along with certain supermarkets in the U.S., that do a lot with bulk food and beverage merchandising. Most of these retailers also have bulk units in their stores that turn peanuts into peanut butter, for example, a concept not unlike dispensing bulk wine.

On the natural-organic format side of the street, we're thinking chains like Whole Foods Market, the PCC Co-Op chain in Washington state, Sprouts Farmers Market and its cousins, Henry's Farmers Market and Sunflower Farmers Market, along with a number of other grocers. The 'green' street cred of the bulk-wine dispensing machines, combined with the price savings aspect, just might be a solid concept for these grocers and numerous others with similar formats.

There also could be room in the discount grocer segment for the wine pumps. For example, the fast-growing Idaho-based WinCo Foods chain has massive bulk foods sections, which include the peanut butter grinders mentioned above, in its 90,000 -to- 100,000 square-foot discount supermarkets. The wine pump is a logical extension to such merchandising.

We could even possibly see the wine pumps in small-format hard discount stores like Aldi, for example, as well as in beverage superstores like the BevMo chain.

Lastly, the machines might be a big hit in membership warehouse stores like Costco, Sam's Club and BJ's Wholesale, where bulk, in the form of buying in bulk but generally packaged goods - as well as shoppers' motivation to save money - is the norm.

The merchandising of bulk, or un-packaged foods, which is how it all began centuries ago, is growing significantly in consumer popularity currently in the U.S. It never went away. Many grocers have featured it continually, in updated forms for decades. It's also more than a retro fad. Bulk merchandising is increasingly popular because of the cost-savings - bulk flour, nuts and oatmeal, just three examples, are generally much cheaper than the same packaged products - as well as the 'green' attributes, less packaging, it offers.

Numerous U.S. natural foods stores, along with some supermarkets, also offer various liquid products, like spring water, olive oil and vinegar, in bulk. Customers bring their own container to the store and fill' er up.

There are also companies that operate stand-alone, coin-operated spring water vending machine kiosks in numerous cities and towns. Customers put the money, usually about 50 cents a gallon, in the coin box, put their re-usable container under the spout, and fill up.

The only major drawback we see with the wine pump is the potential for frequent in-store customer self-service sampling; the grabbing of the hose, tilting back of the head, and tasting away directly from the source. This could particularly be a serious problem with minors.

In fact, if the wine pumps are to make it to the U.S., its likely some sort of locking device would have to be installed on the machines in-store so that only shoppers of legal age could have access to them.

Of course, one can make the argument that it's just as easy for a customer, of legal age or under age, to grab a bottle of wine or other alcoholic beverage off the shelf, open it, and give it a taste. Interestingly, this doesn't happen very often in most grocery stores. And in terms of purchasing the bulk wine at checkout, the process is no different than a customer's purchasing of alcoholic beverages in a bottle, can, keg or box. If the checkout clerk has a question as to the customer's age, she asks for their identification.

On a closing note, were we to offer a grocer who decided to test one of the wine pumps in his or her stores a bit of marketing advise, it might be to name the wines dispensed from the machine using the jargon from a similar form of liquid dispensing which is very familiar to consumers - the gas pump. The wine names: How about ... Regular, Premium and Diesel?
Posted by Fresh & Easy Buzz at 5:25 PM

I've seen this in France and wouldn't mind using it here in the states. What I haven't seen addressed is the concern of driving with opened containers of wine. I'm not sure what the law says but if you cannot reseal a container you've filled I wonder if there are implications?

In many states you can drive with an unsealed container of wine, beer or spirits as long as it's in the trunk of the car. That's the law in California. So that would solve the open container issue in those states.

Plus, couldn't the store seal the cap of the plastic gallon jug or whatever container with some kind of colored seal tape? The seal could even have text on it indicating it was sealed at the store, ect.

I think the wine distributors and bottled wine industry will try to block this from getting into U.S. grocery stores. I don't think it would hurt their business. But particularly the wine distributors who have control over the market with the 3 tier distribution system don't want anything that might threaten their dominance at retail.