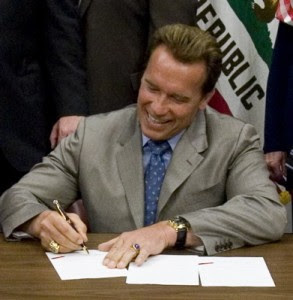 California Governor Arnold Schwarzenegger has been busy yesterday and today signing and taking his veto pen to numerous legislative bills, as the midnight tonight deadline looms closer. Any of the bills on his desk the Governor doesn't either sign or veto before midnight tonight automatically become law.

Yesterday and so far today the Governor, who's completing his last year in office, has dealt with 347 legislative bills. He signed 217 bills and vetoed 130 bills as of this afternoon. [See here, here and here.] That's a lot of activity even for a Governor who played an action here in the movies for years before getting into politics.

By our count, California's chief executive has thus far dealt with 466 of the 765 legislative bills sent to him at the end of August by the California State Legislature. That stills leaves a whopping 299 bills for the Governor to deal with before midnight tonight, which suggests he's going to have to get into "action hero" mode, at least as it pertains to legislative bill activity.

One of those remaining bills Governor Schwarzenegger will either sign, veto or let automatically become law is AB 1060, which if signed or allowed to become law without a veto by the Governor will make it illegal for grocers to sell alcoholic beverages at grocery store self-service checkouts. We've dubbed the legislation the "Tesco Fresh & Easy Law" because Tesco's Fresh & Easy Neighborhood Market will be the only California grocer currently affected by the law, since its the only chain that offers self-service checkout-only in its stores in the Golden State.

Word is the Governor is currently at his desk, remaining bills stacked high, working away at an "action hero" pace. Stay tuned. Fresh & Easy Buzz will report the outcome of AB 1060 as soon as we know what it is.

May 20, 2008: Take One Dose of 'Internal Research', Add An 'Independent' Survey From An Unnamed Source, and You Get A Consumer Preference For Self-Service Checkout.
Posted by Fresh & Easy Buzz at 3:28 PM