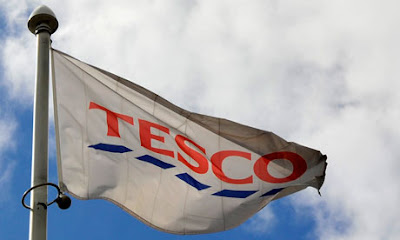 The Tesco corporate flag flies at full staff over corporate headquarters in Cheshunt, United Kingdom. With divisions and stores in Europe, Asia and the United States, the sun seldom sets on the Tesco flag.

Rather than replacing its former director of grocery buying and merchandising, Sean McCurley, with an executive from its United Kingdom headquarters, Tesco has hired Larry Biggerstaff, a grocery buying and merchandising executive and manager with extensive experience in the U.S. food and grocery retailing industry, as the new director of grocery at El Segundo, California-based Fresh & Easy Neighborhood Market USA, Fresh & Easy Buzz has learned.

Tesco's Fresh & Easy has been without a director of grocery since then.

Since Sean McCurley's departure months ago, there's been considerable speculation in certain circles in the UK and U.S. that Tesco would replace him with someone from its UK headquarters. But that's not the case...this time around.

Fresh & Easy Neighborhood Market hasn't announced the hiring of Biggerstaff as its director of grocery.

Larry Biggerstaff hasn't personally announced his new job or new employer yet either. For example, on his Linked-In.com profile page, as of the time (10:02 pm) this story was published today, he has listed as his current position the 'to be announced' as shown below (in italics) directly from the Linked-In page:

Prior to accepting the position as director of grocery with Tesco's Fresh & Easy, Biggerstaff was the vice president of merchandising at Morovia, California-headquartered Trader Joe's, although his time with the iconic Southern California-based grocery chain of about 315 stores was brief.

Before joining Trader Joe's, Larry Biggerstaff was senior director of grocery, dairy, frozen, alcohol and tobacco at Jacksonville, Florida-based supermarket chain Winn-Dixie. In that position he had overall responsibility for all of the chain's buying and merchandising in those respective categories. Before assuming the senior director position at Winn Dixie, he was the director of category management at the chain.

While at Winn-Dixie, Biggerstaff, who attended Western Michigan University, graduated from the 'Retail Masters Program,' class of 2008, sponsored by the Florida Retail Federation.

John Burry, who is one of the original Tesco UK transplants who came to America to start up Fresh & Easy in 2006-2007, is the senior executive in charge of the grocery merchandising and buying (commercial) function at the fresh food and grocery chain, which is based in El Segundo, California, and has 163 stores, with five new units opening on September 15 (2 stores) and September 22 (3 units). Four new stores opened on September 8.

Tesco's Fresh & Easy Neighborhood Market replaced Jim Jensen as director of fresh foods, who spent all of his career in the U.S. retail food-grocery and convenience store industry, including working as a category manager for 7-Eleven, with Tim Lee, who prior to coming to Fresh & Easy earlier this year was a long time category executive and manager at Tesco's headquarters in the UK. The Fresh & Easy position is Lee's first in the U.S.

Tim Lee's specialty at Tesco's corporate headquarters in the UK, where he was a produce category procurement director, was fresh produce. There Lee and another Tesco produce category procurement director, Alex Dower, launched Tesco's global fresh produce sourcing buying and supply chain initiative in about mid-2009. The initiative focuses on direct procurement of fresh produce for Tesco stores in the UK and continental Europe. Lee's responsibilities included setting up satellite offices in growing and sourcing regions around the world and staffing the offices with technical specialists and produce buying teams.

After Sean McCurley left Fresh & Easy to return to Tesco in the UK, we suggested Fresh & Easy Neighborhood Market replace him with a director of grocery who has extensive experience in the U.S., particularly in the Western U.S. and especially in California. The grocery chain has done that to a significant degree, although Larry Biggerstaff's experience in the Western USA is limited. But it is in the U.S.

Former director of grocery, Sean McCurley, has a UK-only background, while Larry Biggerstaff has spent his entire career in the U.S.

All things being equal (like individualism and performance), perhaps Tesco has found a good balance in its new (Biggerstaff) and fairly new (Lee) directors of grocery and fresh foods. One (Lee) has Tesco experience and the other (Biggerstaff) has a long track record of experience in U.S. food and grocery retailing.
Posted by Fresh & Easy Buzz at 10:02 PM