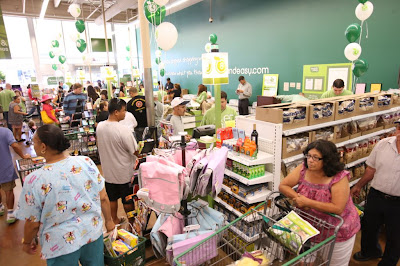 As we wrote about on July 14 (and actually reported on nearly a month before the grocer announced it) in this piece - Fresh & Easy Neighborhood Market Confirms Our June 25 Report it Will Open Nine New Stores in September 2010 - Tesco's Fresh & Easy is opening nine new stores in September.

The first four of those nine stores, all in Southern California, open tomorrow.

The stores opening tomorrow morning are:

There are currently 159 Fresh & Easy fresh food and grocery markets in California (Southern and the Central Valley), Metropolitan Phoenix, Arizona, and in Metro Las Vegas, Nevada.

Tomorrow that total number will grow to 163 Fresh & Easy stores, with 102 in California.

Following tomorrow's openings, two new Fresh & Easy markets will open on September 15. Both of those new stores are in the Fresno Metropolitan region in California's Central Valley. The stores are located at: Cedar Ave. & Shields Ave., in Fresno, and Herndon Ave. & Fowler Ave., in next door Clovis.

On September 22, the remaining three of the nine new stores for September are set to open. Those stores, all in the Metro San Diego region in Southern California are at:

Tesco's Fresh & Easy Neighborhood Market hasn't yet announced any new store openings for October. However, according to our sources, thus far three new stores are set to open in October. New store opening decisions are most always a moving target at Fresh & Easy, therefore our number is as of today, and could change in the upward direction before an announcement is made by the grocery chain.

Rather than open two or three new stores over the summer months, the grocer decided to wait until September - back-to-school time - and open nine stores in the same month, which is something Fresh & Easy has done frequently. Think of it as sort of a new store opening "Big Bang" theory or strategy.

New jobs and the economy

Fresh & Easy stores employ between 20-25 workers per-store. All store workers, except the store manager and sometimes the team leader (assistant manager) are part timers, who work in the range of 20 -to-32 hours a week.

Starting pay at the California Fresh & Easy stores is $10 hour. It's $9 hour in Arizona and Nevada. Team leaders start at $13 hour. Store managers are salaried.

Tesco's Fresh & Easy pays about 80% of its part time employees' health insurance premiums, as long as the work at least 20 hours a week, and offers them a match on their 401 (k) savings plans.

The four new stores opening tomorrow will result in about 90 or so new jobs in Southern California, albeit part time positions. In the current economy - and in California especially, which has a 12.3% unemployment rate - every new job is needed: Part time, full time and even semi-part time.

Therefore, those 90 new jobs (and the 180 or so total new jobs created at the nine Fresh & Easy markets opening this month) are good news specifically to the people hired - and a good thing in general coming two days after a Labor Day holiday in America, in which we celebrated against a backdrop of a 9.6% unemployment rate, with many more Americans than that percentage represents unable to find work, but no longer being reported in the official statistics.

In fact, food and grocery retailers are one of the few business segments in corporate America (and in the case of Tesco's Fresh & Easy from the United Kingdom) that are spending and investing - and creating new jobs - rather than sitting on piles of cash. It's estimated big U.S. corporations in the aggregate are sitting on nearly $3 trillion in cash reserves rather than investing it in America because they aren't confident in the U.S economy.

But most food and grocery retailers, ranging from supermarkets and mass merchandisers, to alternative formats and convenience stores, are bullish on growing their respective businesses and store-counts in the U.S., unlike the corporations sitting on all that cash. Remember that next time you visit the grocery store. It's one bright spot - or business segment - when it comes to job creation in America.
Posted by Fresh & Easy Buzz at 6:29 PM

I was referring to Fresh & Easy using the European-style cart - look at the photo above, a shopper is using the large-sized cart, especially for this store that small, plus, increase space availability in the aisles.