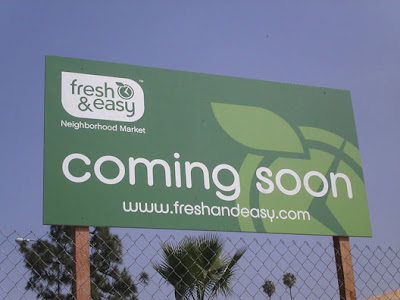 Tesco's Fresh & Easy Neighborhood Market currently has no plans to open any new stores in either July or August, Fresh & Easy Buzz has learned. Our source information is strong enough on this that if Fresh & Easy were to open a store, say in August, it will be because the grocer decided to do so after today.

The next batch of new Fresh & Easy stores will likely open in September 2010, according to our information. Look for as many as 9-10 new store openings in September.

There are currently 159 Fresh & Easy stores open and operating.

If the next new store opening doesn't come until September, as we're reporting, that will mean the grocery chain has taken a four month new store opening pause - from May -to- August 2010 - which is similar to what the grocer did for about three months back in March 2008, just five months after its first store opened in November 2007. [See - March 29, 2008: Tesco's Fresh & Easy 'Taking a Pause' From New Store Openings: A Full Review In the Works] [ April 14, 2008: Commentary: Fresh & Easy Should Use its New-Store Opening 'Pause' in Part to Further Train, Develop and Reward its Store-Level Employees.]

Tesco's Fresh & Easy continues to publicly say, via its corporate spokesman, that it's taking a slow and cautious approach to opening new stores because of the continuing recession, which has hit the states of California. The economy in all three states is improving though.

But this argument, which is nearly two years old, really begs the question, in our analysis. That question, or central proposition is:

If you're a major global retailer like Tesco, the third largest food and grocery retailing company in the world, and you say you still believe strongly in your U.S. format and chain, Fresh & Easy, which Tesco says it does, and you have many stores completed and sitting empty, which you're paying monthly rent on, why, recession or not - and the economy is without a doubt improving significantly - would you not open those stores, particularly a few of the completed 18 stores in Northern California's San Francisco Bay Area, a region where the economy is considerably better (and improving faster) than it is currently in Southern and Central California, southern Nevada and Metro Phoenix, Arizona, the market regions where Fresh & Easy has its current 159 stores?

Further, since one of the key positioning points of the Fresh & Easy format and stores is that they're affordable - Tesco has even claimed the prices are at least 10% lower than Fresh & Easy's supermarket competition, and that's not including the regular 20% off discount store coupons the grocer regularly distributes - one must then also logically ask why such a format, Fresh & Easy as described by Tesco, wouldn't be the perfect answer for shoppers during a recession? And since it's not, what's wrong?

We aren't going to answer the question in this piece. But if you read through Fresh & Easy Buzz, which we've been publishing since late 2007, you'll be able to derive some answers, at least based on our close observation, research, reporting and analysis of Tesco's Fresh & Easy for nearly three years.

This question, or central proposition, though is the one Tesco needs to ask itself internally. It should also seek some outside, unbiased and objective counsel on the question as well. Answering the question honestly, then moving forward with changes based on those answers, is the first key step the grocer needs to take in order to have a chance of real success - breaking even, then profits, and ultimately growth - with Fresh & Easy Neighborhood Market.

That's an eight month period, which works out to opening an average of between four -to- five (four some months, five others) new stores a month. That's a decent pace. However, in Northern California alone, Tesco has 37 store locations which have been confirmed since 2008, more that we've reported on but aren't confirmed by the grocer. Most of the Northern California stores aren't completed. Work hasn't even started on many. But a couple, like the store in Pacifica, California near San Francisco, are completed and sitting empty.

In Southern and Central California, southern Nevada - where a new Fresh & Easy store hasn't been opened in nearly a year - and Metro Phoenix, Arizona, the grocer has probably as many or more than 36 stores that are either completed and sitting empty or could be completed rapidly, but has put construction on hold.

A new CEO, current director of international operations and IT Philip Clarke, will be taking over for Tesco CEO Terry Leahy in early March 2011. As such we don't expect to see any change in the number of Fresh & Easy stores opened this year, over Leahy's estimate. In fact, if anything, perhaps fewer.

Because Tesco has a strong culture of succession planning, Philip Clarke is already working with CEO Leahy in the corner office at Tesco corporate headquarters in the United Kingdom, in addition to doing his current job. Clarke has had little if any involvement in how Fresh & Easy has been run to date, that's been done by Tesco director and Fresh & Easy Neighborhood Market CEO Tim Mason, under CEO Leahy's supervision and support.

The most significant, in a challenging way for Tesco, aspect of the higher loss in 2009/10, compared to 2008/09, is that the loss of $45 million more in 2009/10 came with a substantial increase in sales at Fresh & Easy. (See the links above.) Why is this important? Because a key part of Tesco's strategy with Fresh & Easy is predicated on an assumption that as scale and sales increase, losses will narrow. But the opposite happened in 2009/10 over 2008/09.

Additionally, Tesco is predicting an increase in sales of 50% in fiscal year 2010/11, over 2009/10. But it's also projected a loss of about $253 million, the same as 2009/10. This means that increased scale - the significant predicted year-over-year 50% increase in sales - does absolutely nothing to decrease the loss at Fresh & Easy, based entirely on Tesco's own numbers and estimates. For those who know even just a little bit about the food and grocery retailing business, this is a serious problem.

Tesco also just spent what Fresh & Easy Neighborhood Market CEO Tim Mason says is in the "tens of millions of dollars" to buy and takeover its produce supplier, Wild Rocket Foods, and its fresh meat and prepared foods ingredient supplier, 2 Sisters Food Group. The takeover is over adding what CEO Mason says is about 750 employees to the Tesco Fresh & Easy Neighborhood Market payroll.

Tesco's line, which most all of the grocery industry trade press and mainstream business press has published in its stories on the takeover, is that the company is doing this because it demonstrates confidence in Fresh & Easy... ect.

But Tesco intentionally brought Wild Rocket and 2 Sisters with it to the U.S. as part of a strategy of outsourcing its fresh produce and meat supply functions in order to achieve cost savings. In other words, built into the financial assumptions for Fresh & Easy's breaking even is having the two companies there as independently-owned supply partners to absorb labor costs. Adding 750 new employees to the Tesco Fresh & Easy payroll by taking over Wild Rocket and 2 Sisters blows those break-even assumptions right out of the water, most probably. Tesco can probably take some sort of an accounting charge over the cost of buying the two companies.

You do the math. Assume the fully-burdened cost per employee is $30,000, which is reasonable. Multiple that by 750 added employees to the Tesco Fresh & Easy payroll. Since Wild Rocket Foods and 2 Sisters Food Group both only had Fresh & Easy as their respective U.S. customers, there's no other revenue source for Tesco regarding its ownership of the two companies. That means the added labor cost of these 750 new employees has to come from current and future Fresh & Easy Neighborhood Market revenue. (We suspect layoffs of some sort will come soon at both Wild Rocket and 2 Sisters.) This could blow Tesco CEO Leahy's projected $253 fiscal year 2010/11 loss for Fresh & Easy out of the water, possibly meaning an even bigger loss for the fiscal year which ends in February 2011.

Terry Leahy will be leaving the CEO position on March 11, 2010, and Tesco won't report it's fiscal year 2010/11 sales and earnings, including its loss for Fresh & Easy until the following month, April. Therefore he won't be around to have to deal with the numbers - be they less than $253 million, around $253 million, or possibly more.

But new CEO Philip Clarke will be there in April 2011, just a little over a month into his new job as CEO of Tesco. And you can bet he's already thinking about what he's going to say, and do, about it. We also doubt if opening new stores is the primary thing on incoming CEO Clarke's mind right now - or at the top of his "to do list" - regarding Fresh & Easy Neighborhood Market.