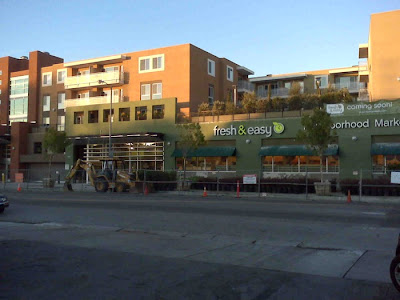 Pictured above is the new Fresh & Easy market at 1025 East Adams Boulevard in South Los Angeles. The store is set to open on February 24. The low-income South Los Angeles neighborhood is underserved by food and grocery stores. The location should be a good one for Tesco's Fresh & Easy, since there are few is any existing food stores in the area. [Photo credit: Fresh & Easy Neighborhood Market.]

Thus far, the fresh foods and grocery chain plans to open nine new stores next month. For those keeping score, the nine will be the most new stores Fresh & Easy has opened in a single month since September, 2008, according to our tracking.

Below are the nine new Fresh & Easy stores set to open thus far next month:

[Reedley is in the Fresno, CA market region]

Tesco opened a new Fresh & Easy store today in Rancho Cucamonga, which is in Southern California. The store is at 8956 Foothill Boulevard in the city.

The grocer has thus far opened five new stores this month - three in the Fresno market region and two in Southern California.

Based on our information, today's new store opening in Rancho Cucamonga will be the last one for January 2010.
Posted by Fresh & Easy Buzz at 10:49 PM

Great to see Fresh and Easy opening more stores.They are also opening in FRESNO on 17th February,Cedar & Nees. It looks like they have decided the worldwide recession is over and they can increase their stores more rapidly.I think they will open about 10 new stores in March as they are recruiting staff in many new locations.N.California next? They have the Distribution centre and stores built already. Your excellent comments would be welcome.

It seems that F&E completely abandoned idea to open new stores in Bay Area. One is sitting next to me for 1.5 years already - just empty building marked as "future location" on their map. F&E first promised to open it beginning 2009 but later postponed and then changed to "future". Any questions on Twitter are answered that they announce only "1 month prior" and emails just got ignored. Looking at their "expansion" in S. California makes me a little bit jealous :o) To me it would be sufficient if they say - Hey, no plans for 1st / 2nd half of 2010 or no plans to open Bay Area stores at all.... But just ignoring any questions on that topic....

Regarding the Fresh & Easy store site you mention next to you, empty for 1.5 years, can you give us the location of that store/building in the Bay Area - the address (just street is fine if don't have specific address) and city?

Sure, no problem. It is corner of Rengstorf and Middlefield in Mountain View.

The low-income South Los Angeles neighborhood is underserved by food and grocery stores. The location should be a good one for Tesco's Fresh & Easy, since there are few is any existing food stores in the area.

There's a Superior Grocers in the vicinity at 20th & Central. It opened last fall.

Andrey P. can be certain that Fresh and Easy will be opening stores shortly in Bay area ,they have been purchasing land,around the Bay area not leasing for new stores this shows a great commitment from them in difficult times. Hope you enjoy the store when it opens.l hope Tim Mason their top man emails you on the opening.

anyone know how many existing and operating Fresh n Easys are in California (including northern, central and southern)? I'm multi-tasking while trying to dig through your archives at the moment... any help would be appreciated.

However, the neighborhood is still underserved by grocery stores.

It Will certainly be better served though by two stores once the Fresh & Easy market opens on February 24. And Superior Grocers did beat Fresh & Easy to the punch in terms of opening its store first.

The 2 Fresh & Easy stores in San Jose and the 2 in Sunnyvale are sitting in the same condition as the one in Mountain View that Andrey mentions. Don't see any of these 4 opening anytime soon based on how they look.

Roger, what makes you think Fresh & Easy is going to open the Bay Area stores soon? The one near me in San Jose has been under renovation for 2 years and it's nowhere near being completed. Hasn't had any work on it for at least a year and a half. Not even half completed.

Fresh and Easy to open in Rialto at 2015 N.Riverside Avenue on 17th Feb 2010.They are certainly opening a lot of stores in a short time.

I've got a similar situation to Audrey up here in Sacramento - a location (Del Paso Road and East Commerce) that looks near-completed just a couple blocks from my apartment that has been sitting there for at least 18 months. The real estate sign advertising space available in the same complex has even had a "Fresh 'N Easy Market Coming Soon" sign for about a year! Would love to see it opened soon!

F&E will expand in nor cal when So cal store become more profitable... More like Mid 2011 for nor cali... -

F&E will expand in nor cal when So cal store become more profitable... More like Mid 2011 for nor cali... -

If Tesco waits until the existing stores are profitable before launching into Northern California - it's going to be a very long wait.

That would sort of rule out Northern California for mid-2011 in terms of the 'launch when profitable' strategy.

Also, with a $250 million loss for FY 2010/11, it would take a miracle for Tesco to make a profit the following fiscal year with Fresh & Easy.

Having said that, we aren't saying Fresh & Easy will start opening stores in Northern California in this calendar year - or even before the end of its 2010/11 fiscal year. In fact, we wouldn't bet more than $1 that they will.

But they certainly don't have a strategy to wait until there's a profit to do it. In fact, Tesco believes the more stores it opens (within reason of course), the faster it will make a profit. So really the strategy is the opposite.