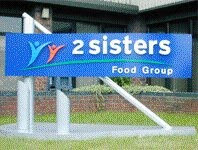 On August 27, 2008 we reported in this piece - UFCW Union Reports Tesco Fresh & Easy Neighborhood Market's Prepared Foods Supplier to Labor Board For What it Says is Unfair Firing of Six Employees - that the United Food & Commercial Workers (UFCW) union charged Tesco-owned Fresh & Easy Neighborhood Market's UK-headquartered fresh meat and fresh-prepared foods supplier 2 Sisters Food Group with unfair labor practices at its Riverside County, California plant, filing a complaint against it with the National Labor Relations Board (NLRB), for what the union said was the unfair firing of six employees for attending a union recruitment meeting, along with filing complaints against the workers' managers at the company.

UK-based Tesco brought 2 Sisters Food Group with it to the U.S. in 2007 to be its supplier of fresh meat and poultry and fresh-prepared foods. 2 Sisters is independently-owned and is not connected to Tesco corporately. However it serves as a quasi-in-house supplier to Fresh & Easy for the products in these two categories.

The UFCW began a campaign to unionize employees at the 2 Sisters Food Group plant in Riverside County in early 2008, just as it did with Fresh & Easy's store-level employees a couple months earlier

Nearly two years later (after the first of multiple complaints was filed as reported in our August story linked above), on June 10, 2010, a National Labor Relations Board (NLRB) Administrative Law Judge, Lana H. Parke, has reached a decision on the 2008 case, which was consolidated into a number of other complaints filed since then by the UFCW against 2 Sisters Food Group.

The consolidated complaint in the case, which was tried by Judge Parke on March 1-3 in Riverside County, California, where 2 Sisters Food Group is based near Fresh & Easy Neighborhood Market's distribution facility, and on March 1-3 and in Los Angeles, alleged that Fresh & Easy Neighborhood Market violated Sections 8(a)(3) and (1) of the National Labor Relations Act, according the the judge's ruling summary.

A key, but not sole, complaint in the case by the UFCW is that 2 Sisters Food Group interfered with a July 17, 2009 election by company employees, the positive results of which would have unionized the company. The union's chief goal in the case was to get the election, which the employees that favored unionization lost, set aside on the grounds the company's interference in it resulted in an unfair election.

1. Did the Respondent (2 Sisters Food Group) violate Section 8(a)(1) of the Act by promulgating and maintaining overbroad rules, including solicitation and distribution rules and a rule waiving employees’ right to file charges with the Board, all of which has interfered with, restrained, and coerced employees in the exercise of their Section 7 rights?

2. Did the Respondent violate Sections 8(a)(3) and (1) of the Act by terminating employee Xonia Trespalacios on July 13, 2009? (this goes to the original complaint reported on in our August 2008 piece.)

3. Did the Respondent engage in conduct that affected the results of the representation election held July 17, 2009 so as to require the setting aside of the election?

In her June 10, 2010 ruling, Judge Parke ruled for the UFCW and against 2 Sisters Food Group on the union's key issue, that the election held on July 17, 2009 (number 3 above) be set aside and a new election held.

In her decision conclusion in favor of the UFCW, Judge Parke wrote: "In as much as I have recommended that Objections 4 and 37 be sustained, I recommend that the election held on July 17, 2009 in Case No. 21-RC-21137 be set aside and that the representation proceeding be remanded to the Regional Director of Region 21 for the purpose of conducting a second election."

The judge also ruled that 2 Sisters Food Group must post a "Notice of Second Election" in a place where all employees can see it on company premises. The heading of that notice reads:

In the firing of employee Xonia Trespalacios, Judge Parke's remedy is a strong one for the employee: "The Respondent (2 Sisters Food Group) having unlawfully terminated employee Xonia Trespalacios, it must offer her reinstatement and make her whole for any loss of earnings and other benefits. Backpay shall be computed on a quarterly basis from the dates of her discharge to the date of proper offer of reinstatement, less any net interim earnings, as prescribed in F. W. Woolworth Co., 90 NLRB 289 (1950), plus interest as computed in New Horizons for the Retarded, 283 NLRB 1173 (1987). The Respondent will be ordered to make appropriate emendations to Xonia Trespalacios’ personnel files. The Respondent will be ordered to post appropriate notices," the judge wrote.

Below are the recommended remedy's the Judge made in her ruling against 2 Sisters Food Group in the case:

1. Cease and desist from:

(c) In any like or related manner interfering with, restraining, or coercing employees in the exercise of the rights guaranteed them by Section 7 of the Act.

2. Take the following affirmative action necessary to effectuate the policies of the Act.

(a) Within 14 days from the date of this Order, offer employee Xonia Trespalacios full reinstatement to her former jobs or, if that job no longer exists, to substantially equivalent positions, without prejudice to her seniority or any other rights or privileges previously enjoyed

(b) Make employee Xonia Trespalacios whole for any loss of earnings and other benefits suffered as a result of the discrimination against her, in the manner set forth in the remedy section of the decision.

(c) Within 14 days from the date of this Order, remove from its files any reference to the unlawful termination of Xonia Trespalacios and within 3 days thereafter notify her in writing that this has been done and that the termination will not be used against her in any way.

(d) Preserve and, within 14 days of a request, or such additional time as the Regional Director may allow for good cause shown, provide at a reasonable place designated by the Board or its agents, all payroll records, social security payment records, time cards, personnel records and reports, and all other records, including an electronic copy of such records if stored in electronic form, necessary to analyze the amount of back pay due under the terms of this Order.

(e) Within 14 days after service by the Region, post at its facilities in Riverside, California copies of the attached notice marked “Appendix.”[23] Copies of the notice, on forms provided by the Regional Director for Region 21 after being signed by the Respondent's authorized representative, shall be posted by the Respondent immediately upon receipt and maintained for 60 consecutive days in conspicuous places including all places where notices to employees are customarily posted. Reasonable steps shall be taken by the Respondent to ensure that the notices are not altered, defaced, or covered by any other material. In the event that, during the pendency of these proceedings, the Respondent has gone out of business or closed the facility involved in these proceedings, the Respondent shall duplicate and mail, at its own expense, a copy of the notice to all current employees and former employees employed by Respondent at any time since July 13, 2009.

(f) Within 21 days after service by the Region, file with the Regional Director a sworn certification of a responsible official on a form provided by the Region attesting to the steps that Respondent has taken to comply.

[We suggest you read Judge Parke's full written ruling here. It offers numerous details of the case, as well as a summary of the issues in the case involving employees and their supervisors at the 2 Sisters Food Group facility in Riverside County, California.]

Judge Parke's June 10, 2010 ruling and order is pending. It must be approved by the NRLB.

2 Sisters Food Group has the right to appeal the Administrative Law Judge's ruling should it be approved by the NRLB, which most-likely it will per the agency's normal procedure following a judge's ruling.

The NLRB Administrative Law Judge's ruling is a clear victory in this instance for the union. The key finding from the UFCW's standpoint in terms of being able to unionize 2 Sisters Food Group's Riverside County facility is the provision that a new employee election must be held.