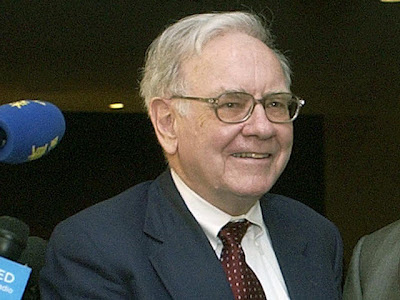 In a March 1, 2010 story - Warren Buffett, 'The Oracle of Omaha,' Wants you to shop at Tesco...But He Doesn't Mind if You Shop at Walmart - we reported Warren Buffett (above), often called 'The Oracle of Omaha' because of the combination of his legendary investment skills and near-lifelong residence in Omaha, Nebraska, where he was born and raised and still lives, disclosed in his annual letter to shareholders that his Berkshire Hathaway holding company had increased its common stock share holdings in United Kingdom-based Tesco plc to a total of 234,247,373 shares, valued at $1, 367 billion, giving him ownership of about 3% of the company. The precise total was more like 2.99%, which is why Buffett's then stock buy didn't trigger a disclosure as required by law in the UK when an investor acquires 3% or more of a company.

Buffett, through Berkshire Hathaway, now owns 242 million Tesco shares, or 3.02% of the company. The shares are valued at about £968 million - or $1.445 billion, based on today's exchange rate.

And because Buffet's stock buy on Tuesday increased his ownership stake in Tesco, which owns and operates Southern California-based 159-store Fresh & Easy Neighborhood Market USA, over that 3% threshold, Tesco plc is required to disclose it, which the global retailer did today in this financial news release.

'The Oracle of Omaha' first invested in Tesco through Berkshire Hathaway in 2006, right about the time the retailer announced it was coming to America with Fresh & Easy, acquiring shares then equaling about a 1% ownership stake in the company. Since then Buffett, who's also called 'The Sage of the Plains' (the Omaha angle again), has regularly increased his purchases of Tesco stock, resulting in the 3.2% ownership stake he now has as of Tuesday.

It's safe to say Buffett is bullish on Tesco.

It's also safe to say the $208 million fiscal year 2008/09, and the $253 million fiscal year 2009/10 losses for Tesco's U.S. Fresh & Easy Neighborhood Market grocery retailing venture, along with Tesco's projected 2010/11 fiscal year loss of about the same amount as in 2009/10, haven't detouried Warren Buffett from buying more Tesco plc stock, as evidenced by his big buy on Tuesday. Nor does Fresh & Easy CEO Tim Mason's $6.188 million 2009 pay package seem to have dissuaded the legendary investor from increasing his stake in Tesco. Tesco plc reported record profits in April for its 2009/10 fiscal year.

The disclosure today of Buffett's latest buy also resulted in Tesco's stock share price getting a nice lift, even though the UK's FTSE dropped by 39 points.

In yesterday's story we said this about the probability Tesco investors will vote down the pay package, called the Remuneration Report:

The objective reality is the probability of Ctw Investment Group and the labor union group getting a majority investor vote against the Directors Remuneration report is highly unlikely for a number of reasons, chief among those reasons being that the majority of Tesco investors with voting rights are the big, institutional investors. For example, U.S. billionaire Warren Buffett, who owns 3% (about $1.3 -to- $1.4 billion in value) of Tesco plc through his Berkshire Hathaway holding company and investment firm, won't likely vote against the report.

Based on the disclosure by Tesco today that Warren Buffett has bought nearly 2 million more shares in the company, we feel in even stronger stead in terms of our prediction on which way he - and the majority of investors who have voting rights - will vote on the approval of the Remuneration Report at the shareholders meeting in London on July 2, which is to approve it per Tesco's request.

Meanwhile, his now 3.2% ownership stake makes Buffet one of Tesco's top shareholders, moving him even higher up than he already was before buying the additional 2 million shares on Tuesday.

Being so bullish on Tesco plc, as he's also been on Walmart Stores, Inc., we doubt if this is the last buy of Tesco stock 'The Oracle of Omaha' makes. [See - March 3, 2010: Mr. [Tesco] Three Percent Warren Buffett Still Has That 'Oracle' About Him]

Anonymous said...
Fresh and easy is opening 5 stores in so cal in september 8th-21st

We must have a similar source(s).

Could you drop an email to freshneasybuzz@yahoo.com. You can use an anon e-mail addy if you desire. Want to ask a question.