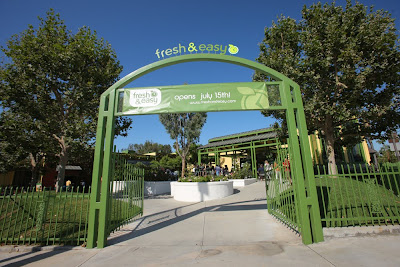 Beginning in early 2008 (click here to read), Fresh & Easy Buzz began suggesting that Tesco's Fresh & Easy Neighborhood Market needed to start individualizing and localizing its stores, including the architectural design elements, based on the unique characteristics of the various and different communities where it locates its markets, rather than follow the cookie-cutter design approach it was doing. We stressed doing so is important in order to, among other things, create a sense of place for a food retailer and for store shoppers in a given community and neighborhood, particularly if the grocer uses "neighborhood" in its store name, like Fresh & Easy does.

In early 2009 Fresh & Easy started doing this with some of its new stores, such as its store at 603 South Lake Avenue in Pasadena, California (pictured at top), which opened on July 15, 2009, and its store in downtown Fresno, California (pictured below, note the localized mural), which we first wrote about here in July 2008, and which opened in January 2010. We like the individualized and localized design elements of both of the stores. (Double click on the photos if you want to view them in larger size.) 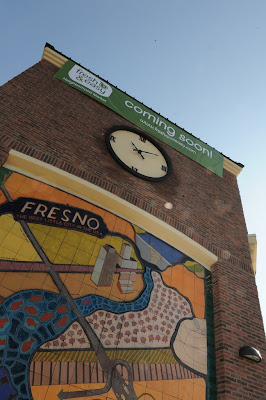 In this piece [Tesco's Fresh & Easy Set to Hit 150-Plus Store-Count Mark on April 7] yesterday we highlighted the fact that with the opening of four new Fresh & Easy Neighborhood Market stores next week, on Wednesday, April 7, Tesco would be achieving the milestone 150-plus store-count mark. (A total of 152 Fresh & Easy markets open on April 7.)

We also discussed in the piece how since January of this year Tesco's Fresh & Easy has been aggressively opening many of the numerous stores it's had completed but sitting unopened for some time in Southern and Central California, Southern Nevada and Metropolitan Phoenix, Arizona.

Today, the fresh foods and grocery chain said it will open seven more stores in April, in addition to the four already set to open on April 7, for a total of 11 new stores opening in April 2010.

The seven new stores, their opening dates and locations are:

The locations of the Four Fresh & Easy stores opening on April 7 are here.

The major news here, in addition to the big 11 store opening itself, is that Tesco is opening three new Fresh & Easy stores in the Bakersfield, California market, in California's southern Central Valley, in April.

Below are the nine Bakersfield market region store locations confirmed to date by Tesco's Fresh & Easy. The four currently opened stores are in green. The three stores opening in April are in red. The two stores in regular black font remain to be opened.

Opening the additional three stores in April will give Fresh & Easy some added critical mass, which in addition to having more stores in general, can payoff for a grocer in terms of getting more bang for its marketing and promotional dollars spent in a regional market like Bakersfield, where to date it only has just the four stores open.

With 11 new stores opening, April will be the most aggressive new store opening month for Fresh & Easy this year. In fact, it's close to a record number of new store openings in a single month for the grocer since it started opening the fresh foods and grocery markets in November 2007.

By the numbers: As of today there are 148 Fresh & Easy stores. On April 7, when four new stores open, Tesco will hit its 150 store milestone-plus two, for 152 stores. At the end of April, Fresh & Easy's store count will stand at 159 stores in California (Southern and Central), Southern Nevada and Metropolitan Phoenix, Arizona.

The 159 stores at the end of April will be about 41 stores short of where Tesco originally planned to be by the end of 2009. However, opening 159 stores in about 29 months (the first Fresh & Easy stores opened in November 2007) is still a rather impressive logistical achievement for any grocer, despite their original strategic plan.

Of course, opening the stores is only half the battle. And like the veteran salesmen advises his young sales reps: 'It's good to open big - but you've got to close even bigger.'

Frankly, I don't get the concept. This has not stopped me from shoping at Trader Joes, Stater, Pavillions, Bristol farms or Whole foods. I'm finding that F&E is not price competitive on many things. It's vegetable offering is poor and of low quality. They started carrying funky cuts of meat and their poultry often smells of hydrogen sulfite (regular not the awful buxted brand). As a warning to customers - don't buy most meat and fresh items on the discount shelves unless you want to get sick or waste a trip back for a refund. Frankly, shopping at F&E is borring - meaning that it curbs impulse shopping. My two local TJs are as crowded as ever. Second, customer service takes a hit on employee turnover. Most people having to dodge supply pallets during the buzzy shopping hours, carts left out in the lot or waiting on assistance when the checkout system goofs.

I was hoping that F&E would give others a bit of competition. Instead, I find the grocery stores more crowded than ever. F&E being, well not crowded but also forcing me to still make a trip elsewhere for something that is not in stock.

On the price front, F&E is more expensive on produce than whole foods!! If you pay close attention to what's in the package, I find that typical items are about 20% more expensive. Additionally, there are issues with the packaging (condensation) that cause salads and other leafy items to spoil almost the same day of purchase. I also find that some ground meat items at F&E release considerably more water than items at traders or whole foods. Is water injected in the mix to inflate weight? I find the same for yogurts and sour creams. The items being more watery than a TJ equivalent.

Lastly, in my area, the store does not carry many items that people are interested in. It's a far cry from carrying beef tripe and other strange items more suitable for the menudo eating crowd in east LA than lakewood or huntington beach. Does spotted dick actually sell? People are not buying your fresh entrees as they are not viewed as healthy or even tasty. The fact is that a good portion of items end-up on the discount shelve. According to one employee, most of it being thrown away and some returned because of hidden spoilage.

The whole F&E concept baffles me. Is it a 7-11 or TJs. If anything is for sure, it looks like Tesco is waiting for a buyer. I was hoping that F&E would be more like tesco express with sustainable/organic offerings plus the smell of fresh baked bread at the evening rush hour. Most of my friends think that you missed the mark by a mile. I am the only one left who occasionally shops there for Milk and other single items when needed.

In my opinion, it may be years before you turn a profit and you actually hinder proper retail competition by being artifically inflated by the mothership. Do me a favor and sell quickly. So that someone with a true sense of the american grocery retail market can innovate and trive - creating real opportunities for our economy.

Looks like the Chicago and New York launches are off for sure. Not even Northern California so far. Such big plans and PR for over a year before the first store opened. Now, all fizzle it seems. Why hasn't Tesco made changes at the top at Fresh & Easy? Seems strange not to.