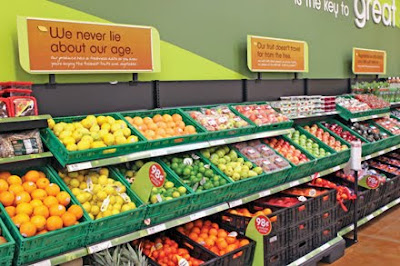 Harris, who was one of the few - if not the last - remaining original category managers who joined Fresh & Easy in late 2006-2007 before the first stores were opened, has left the company to pursue another employment opportunity in the fresh produce industry, Fresh & Easy Buzz has learned.

Since opening its first stores in November 2007, Fresh & Easy has seen numerous category managers and buyers come and go. [See -August 17, 2008: Special Report: Tesco Fresh & Easy Neighborhood Market Experiencing A Category Manager and Buyer 'Brain Drain' and August 17, 2008: Special Report: Tesco Fresh & Easy's Director of Grocery Returning to the UK; Grocery Chain Reorganizing its Corporate Buying Department.] In fact, Chris Harris could be called the "departed veteran category manager" at Fresh & Easy because of the rapid turnover over the last three years in the corporate buying and merchandising department. The department is run by John Burry. He previously worked at Tesco in the UK. He came with CEO Mason and the initial group of senior executives from across the pond to start up Fresh & Easy in 2006.

The fresh food and grocery chain is also already on its second set of directors in both fresh foods and grocery in the corporate buying department. [See first link above, plus - August 22, 2008: Special Report: Today Last Day For Fresh & Easy Neighborhood Market Director of Grocery Charlotte Maxwell; Moving Back to Tesco in the UK; January 6, 2009: Breaking Buzz: Corporate Director of Fresh Foods Jim Jensen Leaves Tesco's Fresh & Easy; and May 23, 2010: Director of Grocery Sean McCurley Leaving Fresh & Easy Neighborhood Market to Return to Tesco in the UK.] Fresh & Easy divides its corporate buying and merchandising department and function into two sections - fresh and grocery. Fresh includes produce, perishables and fresh-prepared foods. Grocery (which the grocer calls ambient, using the British industry term) includes dry grocery and everything else that's "ambient."

Chris Harris, 34, was a key player for Fresh & Easy's corporate buying and merchandising department because, among other positive attributes, he was known to be an aggressive, "get it done" fresh produce category manager, as well as a solid relationship builder, according to growers, vendors, and others who worked with him during his about three years at the fresh food and grocery chain of 159 stores. They also say Harris loves the fresh produce business in general, and demonstrated it in his job at Fresh & Easy Neighborhood Market, and in vendor relations.

Harris also is a native of the UK - although he never worked for Tesco before joining Fresh & Easy - which offers a certain cachet at the grocer's corporate headquarters in Southern California. Virtually all of Fresh & Easy Neighborhood Market USA's senior executives, from CEO Tim Mason on down, all came from the UK, and all worked for Tesco there previously.

Chris Harris first came to the U.S. in 2005, after working for a lettuce growing company in the UK, to work in the grower-processor side of the fresh produce industry. He working for the Ready-Pac and Professional Produce companies in Southern California before joining Fresh & Easy in 2007.

Additionally, he was a key player for the buying and merchandising department at Tesco's Fresh & Easy because he has a strong institutional memory of the start up of the chain in 2007, since he was key in getting the fresh produce category set up and functioning. That can be a difficult type of experience to replace, particularly at such a young grocery chain.

Tim Lee's specialty at Tesco's corporate headquarters in the UK, where he was a produce category procurement director, was fresh produce. There Lee and another Tesco produce category procurement director, Alex Dower, launched Tesco's global fresh produce sourcing buying and supply chain initiative in about mid-2009. The initiative focuses on direct procurement of fresh produce for Tesco stores in the UK and continental Europe. Lee's responsibilities included setting up satellite offices in growing and sourcing regions around the world and staffing the offices with technical specialists and produce buying teams. [More here.]

Sources tell us Lee has started initiating various changes in Fresh & Easy's fresh produce procurement and related policies and practices, based on some of the experiences he had with Tesco in the UK. As far as we're aware, Tim Lee has no previous experience in the U.S. food and grocery retailing or fresh produce industries.

Prior to Lee's arrival, Chris Harris was the point man for fresh produce procurement, pretty much running the category, with supervision by Jim Jensen, who's area of expertise is more in the fresh, prepared foods and related categories rather than produce.

Tesco's Fresh & Easy hasn't replaced Harris yet, nor is it currently advertising for his produce-bakery category manager position as of today.
Posted by Fresh & Easy Buzz at 6:52 PM