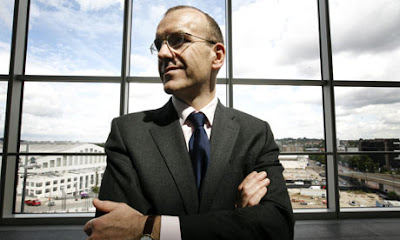 Tesco plc, which owns Fresh & Easy Neighborhood Market USA, announced today that CEO Sir Terry Leahy (pictured above in a contemplative moment) will retire in March 2011. Leahy will be 55 years-old then, and will have served 14 years as CEO of the United Kingdom-based global retailer.

In making the announcement today, which was a surprise to even those of us who follow Tesco closely, Tesco plc chairman David Reid said: "Terry (Leahy) has made an unrivalled contribution over a prolonged period. He is undoubtedly one of the leading businessmen of his generation. He has put in place a strategy which can secure the progress of Tesco for years to come."

Philip Clarke (pictured above), 50, the head of Tesco's European and Asian retail operations, it's second-largest division after the UK, will replace Leahy as CEO when he retires next year. Clarke has worked at Tesco throughout his career, spending many years in retail and commercial (buying and merchandising). He joined the Tesco plc Board in 1998 and currently has responsibility for the group's growing international operations in Asia and Europe as well as for Tesco's information technology operations, the retailer said in its announcement today.

"I am honoured and delighted to succeed Terry who has taught me so much. I am very excited by the opportunity to lead such a fantastic team of executives, many of whom I've worked with for years. Together we will build a global business which focuses on the customer and fully respects our people, our communities, our supply chain and our shareholders," Clarke said today about becoming Tesco's new CEO in March of 2011. 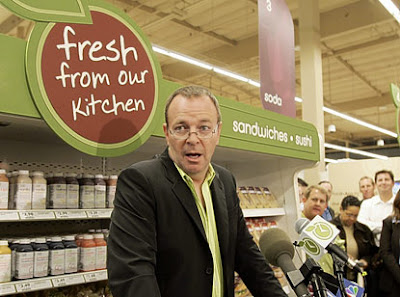 Additionally, Tim Mason (pictured above), 52, the president and CEO of Fresh & Easy Neighborhood Market USA, will become deputy CEO of Tesco plc when Sir Terry retires in March 2011 and Clarke succeeds him, and given the additional responsibility for corporate branding and values and climate change initiatives, along with retaining his position as CEO of Fresh & Easy and remaining in the U.S. at the grocery chain's headquarters in El Segundo, California.

Prior to coming to America as CEO of Fresh & Easy Neighborhood Market in 2006 (the first Fresh & Easy stores opened in November 2007), Mason was Tesco plc's corporate director of marketing in the UK. As such, giving him the new overall corporate responsibilty for Tesco's branding makes sense in that experiential background regard. Terry Leahy was a director of marketing at Tesco prior to becoming its CEO, and was a mentor to Tim Mason when he started in the retailer's marketing department.

Tesco's corporate values and climate change areas have been central to CEO Leahy's tenure as CEO. For example, he's expended considerable effort in building a "Tesco" corporate culture since taking over as CEO 14 years ago, making it one of his chief leadership goals.

Additionally, Sir Terry has been in the forefront of grocery industry CEO's globally on the issue of climate change. For example, he's the first, and still only, food retailing industry CEO to have created an initiative in which many of the products on Tesco store shelves in the United Kingdom have "carbon footprint" shelf signs, which indicate an item's carbon footprint from field or factory to store shelf.

Leahy also has been an outspoken advocate in the UK and globally for creating corporate and government public policy responses to climate change. The fact he's intrusting this responsibilty to Tim Mason, who is the son-in-law of Leahy's mentor, former Tesco CEO Lord MacLaurin, suggests he sees Mason as his heir apparent at Tesco in these two areas - climate change and corporate culture. [Suggested reading: September 8, 2008: Tesco PLC CEO Terry Leahy: 'We Must Go Green' December 31, 2008: 'Green' Retailing: Tesco Scores Second Overall, Number One Among Food and Drug Chains, in Ceres Coalition's Climate Change Corporate Scorecard]

In the announcement today, Tesco CEO Leahy said about his March 2011 retirement: "When I became CEO I had a plan to build Tesco around its customers, to make it number one in the UK and to find new long term growth in non-food, in services and in international expansion. I wanted to develop a purpose and values that could sustain Tesco through its challenges and encourage and grow future leaders. It has taken 14 years but that strategy has become a firm reality now and so I feel my work is almost complete."

Commenting on the naming of Phil Clarke as his replacement, Sir Terry said: "I am delighted Phil Clarke has accepted the role of CEO from March 2011. I have worked with Phil at Tesco for many years and I am confident he has all the necessary talent, energy and experience to take the group forward. He will be supported by an outstanding team of senior executives who together represent one of the strongest leadership teams in the world of retailing. 'There is no better job than leading Tesco and after retirement I will concentrate mainly on private investment. I will, of course, keep a large shareholding in Tesco and remain its biggest supporter."

An interesting note: Terry Leahy and Philip Clarke both were raised in Liverpool, England, also home of those famous lads called the Beatles. Both CEo Leahy and CEO-apparent Clarke also worked at Tesco stores stocking shelves and the like while in high school.

Leahy said today he has no plans to be a non-executive member of Tesco's board when he retires in March 2011. He says his plans are to be an investor globally. We've heard from more than one good source today that Sir Terry has a big interest in investing and getting involved in companies in the rapidly-growing "green" energy, technology and related environmental industries. If so, this would allow him to focus the next phase of his business career to a large degree in the area of climate change, which as mentioned he's put a substantial focus on as CEO of Tesco. And at only 55 that second career phase could be a very long one.

Leahy is also a big supporter of the Everton Football Club and even a special advisor to the team. Perhaps he will have even more time to participate in what is one of his favorite activities - British football and the Everton lads- when he retires in March 2011?

Tesco also announced some additional executive changes that will take place in March 2011 when CEO Terry Leahy retires. Those changes are:

>David Potts, 53, will become the first CEO of Tesco's fast-growing Asia business. He is currently the corporate director of retail and logistics in the UK, as well as having responsibility for the Republic of Ireland. Clarke, who will become CEO in March 2011, currently heads up both the European and Asian operations.

>Richard Brasher, 49, currently Tesco's corporate commercial (buying and merchandising) director, will assume the newly-created role of CEO of the UK business and take responsibility for the Republic of Ireland, a position which will open up when David Potts assumes his new position in March 2011.

The company also said Trevor Masters will continue as CEO of its Central Europe and Turkey retail operations after the March 2011 changes, and in a new position Gordon Fryett will head up Tesco's property and real estate department across the group. A new group commercial (buying and merchandising) role will also be created, Tesco said, without being specific about the nature of the position.

Fresh & Easy Buzz will be offering some analysis of the retirement of Tesco CEO Terry Leahy, and the ramifications of it and all the changes announced today on Tesco plc and its Fresh & Easy Neighborhood Market USA chain, in the days and weeks to come. Stay tuned.

Biographical sketch of Philip Clarke, who will replace Terry Leahy as CEO of Tesco plc in March 2011. Source: Tesco plc:

Phil Clarke first worked for Tesco in 1974 as a part-time assistant while he was still at school in Liverpool.

He has broad Tesco experience as a store manager, a buyer, a marketeer and as an international executive.

He is now responsible for almost 2000 stores and nearly two-thirds of group space. He has been at the heart of all our new moves and operational improvements across Asia and Europe in recent years, including China, India and Turkey, building teams and developing talent in these important markets.

Clarke has been a Non-Executive Director of another FTSE company, Whitbread PLC, since November 2005 and is a member of the board of ECR Europe.

Philip Clarke is married with two children and lives in Hertfordshire, UK.
Posted by Fresh & Easy Buzz at 5:05 PM