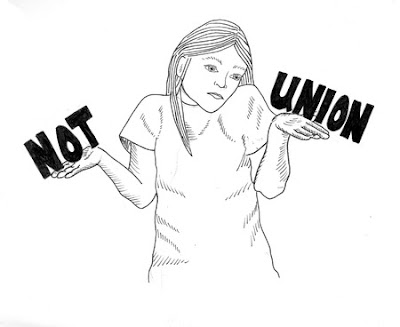 Fresh & Easy Buzz has been covering, reporting on and writing about the unionization issue at Tesco's Fresh & Easy Neighborhood Market more regularly and comprehensively than any other publication we're aware of has to date.

The issue is that the United Food & Commercial Workers (UFCW) union, which represents about 1.3 million unionized retail grocery store workers and employees in allied industries in the U.S., Canada and Puerto Rico - including those at major U.S. grocery chains Kroger Co., Safeway Stores and Supervalu, along with many others, including smaller chains and independent grocery stores - has been organizing store-level employees at Tesco's Fresh & Easy Neighborhood Market, which currently has 159 fresh food and grocery stores in California, Nevada and Arizona, since 2008. Tesco's Fresh & Easy is a non-union grocery chain. Tesco in the United Kingdom is union-affiliated. Tesco is headquartered in the UK.

You can read a history of our coverage of the topic and issue here. Click the "older posts" link at the bottom of the first linked page to see additional pages.

Most recently we reported and published a series of stories about Tesco, Tesco's Fresh & Easy Neighborhood Market, the UFCW union, and labor-related issues and legal cases involving two of the chain's stores and one of its two suppliers - 2 Sisters Food Group - which Tesco recently bought and has taken over. See the stories below:

It appears our coverage of the Tesco Fresh & Easy Neighborhood Market-UFCW union issue in part has contributed to a discussion among a Fresh & Easy employee or two and others on the grocer's Facebook site about whether or not the grocery chain should be a union shop at store-level. The ongoing discussion - titled "Anti Union" - is led by Tom (who says in one post he is a unionized electrician) and Jane, who is a Fresh & Easy employee. It also includes comments by a couple other employees so far.

You can read what's being discussed and debated by the Fresh & Easy Neighborhood Market employees on the Facebook page here. We suspect the discussion isn't over, by the way.

Correus: heard people want to go union, ive been apart of the grocery union and its nothing compaired to other unions that are usefull, i personally feel its useless !!! what do other employees think?

Jane: did you know that tesco is union? I would LOVE to see the union come in. There are way too many heath and safety issues in this company, one store has 6 out of 30 employees out on workers comp! I think that the company is afraid to go union because then they might actually have to start following the law and giving us better pay and hours. Just the fact that they freak out when anyone brings the union up should say something. If fresh and easy is so confident that the union is not needed, then why try to discourage employees from talking to union reps? To be informed from both sides? Sounds to me they want us all to be ignorant pushovers. If this isn't so then why not not invite some union reps to the next round of city meetings to have a little debate about the situation.

Tom: Exactly! Jane, you certainly don't sound like the typical "ignorant pushover" at F&E. What irks me the most is that your CEO makes over $6.18 million annually and the store workers like you make barely enough to live on. Kudos to you Jane for having a VOICE. I do hope your fellow F&E workers join in. I've been following interesting articles on www.freshandeasybuzz.com relating to other F&E antics involving anti union issues.Best of luck to you in your struggle with this issue. Other F&E employees speak up for yourselves.

Tom: and you should also research CEO pay scales for those companies too.

Jane: Hey Romo, You do know that if we do go union, when we sign our contracts they will not lower our pay, we will start right where we are and only go up from there, right? or are you just listening to the one sided opinion of the company? And as for the DM or RM coming in, that doesn't always get anything accomplished, say the hundreds of dollars of code product on the shelf on a daily basis. When you point it out to your manager they tell you that your DM doesn't care if loads are done correctly as long as they are done on time.I'm not saying we one hundred percent need the union, but what I am saying is that if our ceo really believes that we don't need it, why is he so afraid of letting us get both sides of the story?

Jane: out of code product

Jane: either way, why is the company so unwilling to let us have an option? I have no plans on staying with this company, I just would like to see the people who are planning to stay have a great company to work for, and fresh and easy has a great idea, they just have a long way to go.

Tom: One other point for you to consider: "The San Francisco Bay Area is arguably the strongest union region in the United States, particularly in the supermarket industry. All of the region's chains are unionized, as are nearly all of the multi-store independents. " (Financial Times). Consider the correlation between your CEO publicly stating F&E has no plans to expand in northern CA and the union fight. Also what about the recent purchase of Two Sisters (distributor) to fight union? If it is the "employees choice" why is your CEO making it so difficult? Why do managers brain wash employees or more severly and ILLEGAL threaten employees? Read up on the court cases where F&E has been had to offer employee jobs for wrongful termination and give back pay and severence. Educate yourselves==sometimes the top brass (senior managemet) doesn't want you to know it all. Hmmm...wonder why?Does it have anything to do with CEO Mason having to share his wealth? C'mon folks his salary is 3 times that of any other supermarket CEO. Yea, I am part of a union---electrican---and there is no way I would work non union.

[Fresh & Easy Buzz Editor's Note to Tom: That quote about the unionized chains and independent in the San Francisco Bay Area is actually from Fresh & Easy Buzz, not the Financial Times.]

Jane: I have worked for many different companies, and fresh and easy is the first that has a ceo so stingy that we don't even get things like holiday pay, when union stores get double or in some cases triple pay. Did you get the card from Glassell Park? did you know that when they all got together and said they wanted to union the company started kissing their asses and gave them a 30 % increase in hours.

Tom: "Mr Mason said Fresh & Easy was still planning to have open only about 50 new stores in its current fiscal year ending in April 2011, and as yet had no plans to reactivate its expansion into Northern California."Copyright The Financial Times Limited 2010Get all the facts, Correus--especially if you think you have a future with the company.

Tom: You should do your own research. Don't just listen to others, find out all you should know about the company you work for and want a future with. I happen to read tons of financial papers so I know where F&E is right now both legally and financially. There are companies that do pay employees what they deserve. Consider having representation. Like I've said before, there is no way I'd ever work non union. It's your job and your choice.Best of luck to you. I hope it all works out the way you want.

Jane: Your so right Tom. I am not expecting people to just take my word and agree with me. I just want people to open their eyes and think for themselves, do some research and make educated decisions.
on Saturday

Jane: I hope it all works out for you too, I'm sure it will. You seem like your just the kind of person fresh and easy would love to move into management.
Posted by Fresh & Easy Buzz at 3:46 PM

Also Tom is seen saying MORE Coupons! He isn't part of the union he is defending and Jane to me seem to be an employee that probably isn't worth the money they pay here now.

Thanks for the note Tom. We feel it's an important issue, which is why we've been covering it.

Feel free to offer any comments you have on the discussion with Jane and the others here as well.

Anon is fine. You can also use Name/URL and just type in your name.

Anonymous July 1, 2010 1:30 AM: Feel free to read your comment and makes some corrections so it makes better sense. If you do, just submit it and we will delete this one and publish your new version. And we understand - it was 1:30 AM, after all.

i work for this company to and i see how there is 1 set of rules 4 managers and another 4 the backbusting employees. no wonder why they keep us as at will employees. they always tell us dont talk 2 union people. never why we should not. they want us 2 follow like a pack of sheep with no brain of our own. of course tim mason seems like a nice guy when he comes 2 the stores---i could be nice and say all sort of good shit about the company if i were paid his salary.

Will do!
I did read about Tesco's annual meeting in London today. What are your thoughts on the outcome? I think stockholders were hesitant to vote against the remuneration package for fear of stock value falling. I'm still dumbfounded that a company can be 1/2 billion dollars in debt with a CEO making over $6.18 (article today states $6.5 million) for the year.

Also laughing a bit by the true brainwashing done on F&E employees. Interesting how they delete their comments on facebook, too. Kudos to Jane for having the backbone to go against opposition!

Tom: We will have a piece about that aspect of Tesco's 2010 AGM published in the blog this weekend, or Monday at the latest. It will include analysis of the vote.

38% of Tesco shareholders voted against the directors' rumuneration report, and another 9%abstained. That's a significant opposition to the pay package approval for Tim Mason and the others.

Take a look at our www.twitter.com/FreshNEasyBuzz feed. We have a tweet from yesterday about it.

You said F&E is deleted employee posts about the union issue on the Facebook site. Could you offer some specific examples?

The big union chains like Supervalu, Safeway and Kroger are struggling to maintain their status quo. So are the regional union chains. But Walmart, Costco, Target, Trader Joe's , Aldi, Whole Foods and other non-union chains are growing fast. The UFCW should bend over backwards in dealing with the union chains or else it's going to find itself nearly out of business in 10 years or so. Look what happened to the auto worker union.

It doesn't appear to us that Fresh & Easy is deleting comments on the Facebook discussion. There are numerous new comments since June 30