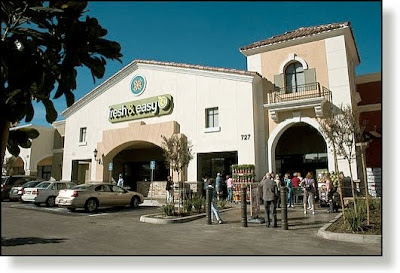 Tesco's Fresh & Easy Neighborhood Market will break the 150 store-count mark next week, on Wednesday, April 7, when it opens four new stores, all in Southern California, where the grocer has its corporate headquarters.

The four new Southern California stores opening on April 7 are:

When the four stores open next Wednesday, Tesco will have 152 Fresh & Easy stores open and operating in Southern and Central California, Southern Nevada and Metropolitan Phoenix, Arizona. As of today, there are 148 Fresh & Easy markets open.

As we've reported on and written about extensively, Tesco originally planned to have at least 150 of its Fresh & Easy small-format, combination fresh food and grocery stores opened in its three current market regions by mid-2009. It's original plan was to have as many as 200 Fresh & Easy stores opened by the end of 2009, including a number of units in Northern California.

However, in March 2008 [Tesco's Fresh & Easy 'Taking a Pause' From New Store Openings: A Full Review In the Works] Tesco took a multi-month "pause" in the opening of any new Fresh & Easy stores.

The grocer then embarked on a major re-merchandising program at its then existing stores, including adding new interior design elements and numerous new manufacturers' branded products and items to the stores.

Tesco then resumed opening new Fresh & Easy stores later in 2008 and into early 2009, but at a much slower pace than it had been doing since November 2007, when it started opening the first stores.

But once again, in mid-2009, Tesco put the brakes on new Fresh & Easy store openings, sighting the economic recession as its official reason for doing so. [Related reading - November 20, 2008: Analysis & Commentary: Fresh & Easy Neighborhood Market and Tesco's Lowered Expectations] It continued to open new stores but at a much slower pace than it had been doing.

To illustrate the significant difference between the Fresh & Easy new store opening pace from November 2007 -to- November 2008 vs. November 2008 to the present, on November 11, 2008 we published this piece [Southern California Market Report: Tesco Hits A Numerical Milestone Tomorrow Morning As Store Number 100 Opens its Doors in Fullerton, California] about the opening of the 100th Fresh & Easy store.

The first batch of Fresh & Easy stores opened in November-December 2007 (The first store, in Hemet, California, opened as a test in late October 2007). So just one year later (November 11, 2008), Tesco had already opened 100 Fresh & Easy stores. In contrast, between November 2008 and the present, the grocer has opened just 48 stores.

Opening 48 new stores from November 2008 to March 2010 is still a significant number. But the point is that its far fewer than Tesco had originally planned to open to date, along with the fact our research shows a clear change in the grocer's store opening pace, based on the story linked above.

The result of these two new store opening halts is that Tesco has ended up with numerous new Fresh & Easy stores in Southern California, Nevada and Arizona sitting completed and empty but not yet opened, in addition to the numerous store sites in Northern California that have been sitting in various states of completion for over two years now.

Fresh & Easy also has been searching for additional new store sites in a fairly aggressive manner since February of this year. The grocer also is using its Web site, along with its Facebook page and Twitter feed, to ask consumers where they would like to see a future Fresh & Easy store.

This is a strategy that can cut both ways: It brings consumers into the new store site selection process (interaction), which has some merits. But since most consumers don't use the same criteria as a grocer does (or should use) to select store locations, it generally provides poor data. And, since most of the suggestions made aren't likely going to result in new stores being located where requested, the potential exists to anger many consumers who might end up feeling their ideas were ignored.

Our take is that Tesco's Fresh & Easy is doing this for two reasons: (1) It wants to see if there's a demand for any of its stores in a major way in certain locations where none currently exist; and (2) it wants to use the outreach process as a form of publicity for its brand and stores. There's nothing wrong with doing either. And both could work for the grocer. They could also backfire, as we suggested above.

Meanwhile, there are plenty of Fresh & Easy stores in various stages of completion, and in the development pipeline, to keep the grocer busy enough for the rest of 2010 getting what already exists open for business.

[Photo credit: The photo at top of the Fresh & Easy Neighborhood Market store located in the Conejo Gateway Shopping Center in Newberry Park, California is courtesy of Scott Harrison of www.harrysonpics.com.]