The two most-classic and most-popular versions of the Irish ballad, "When Irish Eyes are Smiling," is the version by the Irish tenor John McCormack, and the rendition of the song by Irish-American singer (and tenor) Bing Crosby. You can listen to "When Irish eyes are Smiling" by John McCormack here and to Bing Crosby's version of the Irish ballad here. Both versions are three minutes long. 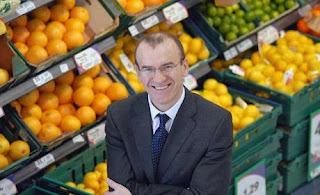 Tesco CEO Sir Terry Leahy (pictured above) is a proud Irishman.
Leahy is so proud of his Irish heritage in fact he recently joined 299 other prominant people of Irish ancestery throughout the world in becoming a charter member of the new Global Irish Forum, a global organization designed to deepen Ireland's engagement with Irish communities worldwide and to spread the message that Ireland is open for business, and remains an attractive place for international investment, business people and tourists alike
Joining the CEO of Tesco as one of the 300 founding-members of the Global Irish Forum, which was hatched at the Global Irish Economic Forum in September 2009 and officially chartered this month under the leadership of Micheal Martin, Ireland's Minister of Foreign Affairs, include such prominant members of the Irish despora in the Unired States as: 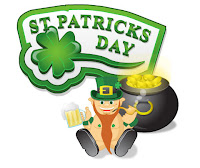 And speaking of the Irish - and Sir Terry Leahy - tomorrow, Wednesday, March 17, is St. Patrick's Day, the day when we're all Irish.

Tomorrow, St. Patrick's Day, is also when Tesco will open its 147th Fresh & Easy Neighborhood Market fresh foods and grocery store. The new store opening tomorrow is at 5639 Centennial Center Boulevard in Las Vegas, Nevada - a city where the saying "The Luck O the Irish" couldn't be more relevant, or needed at the gaming tables and slot machines. It will be Fresh & Easy's 27th store in Nevada.

In light of Tesco CEO Terry Leahy's proud Irish Heritage, one can only expect his "Irish Eyes will be Smiling," knowing there's a Fresh & Easy store opening on St. Patrick's Day, that day in Las Vegas and throughout the U.S. when regardless of our heritage we're all Irish.

In fact, St. Patrick's Day, Fresh & Easy and Las Vegas have many things in common. For instance:

>Fresh & Easy's brand and store color is green. Green is the official color of Ireland (the Emerald Isle) and St. Patricks Day;

>Green, as in the color of money - cold, hard cash - also happens to be the lifeblood of Las Vegas and its mega-gaming industry;

>"The Luck O the Irish" is a saying you'll hear repeated often tomorrow on St. Patrick's Day, as well as throughout the year. Luck also is key in Las Vegas - and luck is certainly key for Tesco with its Fresh & Easy chain;

We expect Tesco's Fresh & Easy to go all out tomorrow with its St. Patrick's Day store grand opening in Las Vegas. After all, anything less might fail to bring that smile to Tesco CEO Sir Terry Leahy's proud Irish eyes.

In case the Fresh & Easy team hasn't thought much about this - the synergy and importance of St. Patrick's Day, Las Vegas, Sir Terry, and the new store opening there tomorrow - we offer six things we suggest they could do for the store grand opening tomorrow. It's still not too late:

1. We would make sure the store is decorated for St. Patrick's Day. Plenty of green shamrocks, Leprechauns, green balloons, streamers and the like. Have shamrock and Leprechaun stickers and balloons to give out to the kids for free.

2. We would make special name tags for all the participants in tomorrow's grand opening, as well as for all of the new Las Vegas store's employees.

The name tags would have an O before each person's last name, which is a St. Patrick's day tradition. Fresh & Easy CEO Tim Mason would be "Tim O' Mason" tomorrow, for example, and so on for everyone participating, and for all of the store's employees. These could be made out of paper right at the store. A green shamrock sticker included on the name tag of course.

3. We would serve free samples of corned beef and cabbage (both sold at Fresh & Easy) to shoppers attending the grand opening tomorrow. This is a must tie-in.

4. We would trade on the "Luck O the Irish" saying by giving out lottery tickets to every customer who buys $10 or more worth of groceries at the store's grand opening tomorrow, say between 10 am and noon. It's Vegas baby, after all. (And how about giving a $25 store gift card to any person attending the grand opening tomorrow who can prove their name is Patrick...or Patricia.

5. We would have an accordion player and a fiddler at the grand opening tomorrow, playing Irish tunes outside the store. It's Vegas, so both shouldn't be very hard to find.

6. We would build displays, with St. Paddy's Day point-of-purchase signs, all over the store, focusing on cross-merchandising, of the top St. Patrick's Day food and beverage items.

To start, think packaged fresh corned beef, fresh cabbage and potatoes cross-merchandised in both the meat and produce departments; even in a refrigerated case outside of both departments for impulse sales. Don't forget the onions and leeks either. Or the seasoning mixes tied-in with both displays.

Additionally, we would feature/display fresh sausages and beef stew meat in the meat and produce departments. Cross-merchandising is an incremental sales builder - always.

And let's not forget a big display of Guinness Beer, and one or two other Irish beer brands such as Harp, where not one shopper can miss it. And a coffee display, with Irish Coffee fixings and recipes.

Do include a big display of Irish soda bread and scones in the bakery (potato rolls would also be nice). Plus, St. Patrick's Day cookies and cupcakes displayed both in the bakery and elsewhere in the store is a must.

Throughout the store we would display packaged scone mixes, canned Heinz Baked Beans, preserves/jams (Robertson's would be nice, including Lemon Curd) and dozens of other key Irish and St. Patrick's Day-themed grocery items (Lucky Charms cereal even works great), all tied-in with St. Patrick's Day point-of-purchase materials and signs. The added sales potential is huge.

These are just six simple ideas. There are many more.

Of course, we would do a version of this at all 146 (147 tomorrow) Fresh & Easy stores in California, Nevada and Arizona for St. Patrick's Day.

Does the increased pace of store openings in 2010 indicate either:
1) The stores are starting to perform better.
2) The economy is performing better.
3) Some combination of both.

We are now reaching the point where the number of announced but unopened stores (especially in Southern California) is declining very rapidly. Do you know if they are actively seeking out and developing new locations and simply holding back on announcing them?

I was really surprised to see them open the store in Las Vegas - a market that has been completely hammered in this recession. I think the offical unemployment rate there is almost 15% (U3) - and much higher if you take into account discouraged workers who have left the work force and workers unwillingly working part time (U6). I'm rather confused by that opening.

Has there been any news on the Stockton warehouse and the opening of Northern California stores? Haven't seen anything, but you would have a much better feel for that.

The best to you.

The reason they are opening the stores is really pretty basic: All of the Fresh & Easy units opened thus far this year, plus others not yet opened, have been completed and sitting vacant for a considerable period of time. It's either open them up and do business or leave them closed and continue to pay the monthly rent and other associated costs, while continuing to not generate any sales from the non-opened stores.

I understand that Fresh and Easy are opening 2 stores in Phoenix on the 14TH April making 4store openings on that day followed on 21st with so far 3 store openings planned two in Bakersfield and one in Phoenix.Where next Northern California?