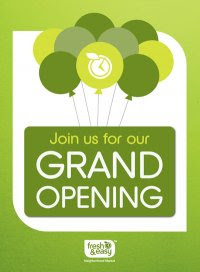 Tesco is preparing to open the first of the three new Fresh & Easy Neighborhood Market stores it has slated for grand openings in March.

Below are the three Fresh & Easy fresh food and grocery markets set to open this month:

On Wednesday, March 10, a new Fresh & Easy store will open in Palm Springs, California, which is located in Riverside County in Southern California's desert region. The new store is at 102 South Sunrise Way in Palm Springs.

The Sunrise & Tahquitz location will be the first Fresh & Easy store in Palm Springs (there's a Fresh & Easy market in Palm Desert, which is right next door), a city that was once the second home capital for many of Hollywood's biggest stars, and still remains a major second-home residence and tourist destination for the famous, infamous and not so famous - along with being a major retirement community.

Over the last decade Palm Springs has grown its permanent resident population considerably. The town's population is currently about 50,000, according to 2009 estimates from the U.S. Census Bureau.

However, that number is a bit deceiving because thousands of people have vacation homes in the city, where they spend a considerable amount of time. For example, right now is the "high season" in Palm Springs (January -to- early April), a time in which these temporary residents spend as much time as they can because of the generally warm and sunny weather.

Additionally, thousands more visit the city on a regular basis, including numerous groups that hold their conventions and other gatherings regularly in Palm Springs.

As a result, the population base from which grocers and other businesses have to draw from in Palm Springs is much greater than its 50,000 permanent residents.

In the summer of 2008 Tesco's Fresh & Easy acquired the Palm Springs location for the store that's opening on Wednesday, March 10.

The store was set to open much sooner than it is. However, it was one of the many new Fresh & Easy stores the grocer postponed opening last year.

The Ann & Centennial store will be the first new Fresh & Easy market the grocer has opened this year in Southern Nevada.

All of Tesco's Fresh & Easy stores in Nevada are located in the Metropolitan Las Vegas region of Southern Nevada.

On March 24, Fresh & Easy will open a new store - and its third new unit for the month - in Calimesa, California, which, like Palm Springs, is in Riverside County in Southern California's Inland Empire region.

The Calimesa Fresh & Easy market, which will be the first unit in the city, is at 1126 Calimesa Boulevard.

Calimesa, which is right next door to the city of Yucaipa, is a young city, having been incorporated only in 1990.

It's also a small town population-wise, with only about 8,000 residents, according to 2009 census bureau data. However, there are thousands more residents who live in next-door Yucaipa and the surrounding area.

There are currently 145 Fresh & Easy fresh food and grocery stores in California (Southern California and the Bakersfield and Fresno regions in the Central Valley); Southern Nevada; and Metropolitan Phoenix, Arizona. At the end of this month the total store count will be 148.
Posted by Fresh & Easy Buzz at 3:37 PM