Kroger's 2010 Reusable Grocery Bag Contest Has Ended; Winners to be Named in July 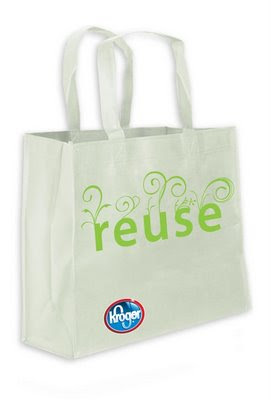 Leading U.S. food, grocery and general merchandise chain Kroger Co. has ended its 2010 design a grocery shopping bag contest, and will announce the finalists, winner and runners up in July.

Read our April 19, 2010 piece - Tesco's Fresh & Easy Joins Kroger Co. in Holding Earth Month-Earth Day Reusable Bag Design Contest - for details about the 2010 Kroger contest. Also view first place winning bag in the 2009 contest at the link above.
Kroger holds the contest annually. It's open to all members of the public.
You can view the numerous bag design entries in this year's contest here.
Fresh & Easy Buzz will let you know who the winner and honorable mention designers are when Kroger announces them next month.
Kroger Co. is the largest traditional U.S. supermarket chain by annual sales volume, and the number three retailer of food and groceries in the country, after number one Walmart Stores, Inc. and number two Costco Wholesale.
In Southern California, southern Nevada and Arizona, the three states where Tesco's Fresh & Easy Neighborhood Market has its 159 stores, Kroger operates the Ralphs Supermarkets and Food 4 Less chains (Southern California and southern Nevada), Smith's Food & Drug (Nevada), Fry's Supermarkets (Arizona) and FoodsCo (California's Central Valley and Northern California).
Reader Note: Related post: June 17, 2010: Fresh & Easy Neighborhood Market Picks Eight Finalists in its Reusable Bag Design Contest; Website Voting Through June 30. Also: Click here for a selection of stories in Fresh & Easy Buzz on the paper or plastic and reusable shopping bag topic and issue.
Posted by Fresh & Easy Buzz at 4:58 PM